An A.I. on a powertrip defines the rules of rulership in the future…and it’s pretty badass. 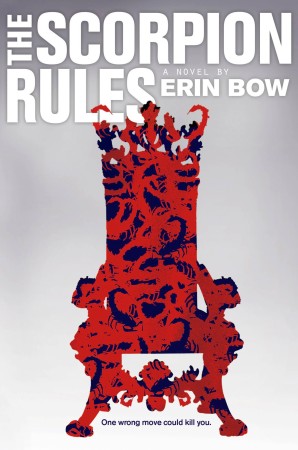 The world is at peace, said the Utterances. And really, if the odd princess has a hard day, is that too much to ask?

Greta is a duchess and crown princess—and a hostage to peace. This is how the game is played: if you want to rule, you must give one of your children as a hostage. Go to war and your hostage dies.

Greta will be free if she can survive until her eighteenth birthday. Until then she lives in the Precepture school with the daughters and sons of the world’s leaders. Like them, she is taught to obey the machines that control their lives. Like them, she is prepared to die with dignity, if she must. But everything changes when a new hostage arrives. Elián is a boy who refuses to play by the rules, a boy who defies everything Greta has ever been taught. And he opens Greta’s eyes to the brutality of the system they live under—and to her own power.

As Greta and Elián watch their nations tip closer to war, Greta becomes a target in a new kind of game. A game that will end up killing them both—unless she can find a way to break all the rules.

Stand alone or series: Book 1 in the Prisoner of Peace series

How did we get this book: ARC from the publisher

Once upon a time (or, four hundred years ago), the world literally went to shit. Climatic catastrophes, wars and plagues raged until an artificial intelligence named Talis got fed up and took charge of the world’s weapons system and turned them against the warring nations. But the threat of annihilation wasn’t enough – the AI did not want to keep destroying entire cities after all – so Talis made it more complicated. Talis made it personal.

He (it?) created the Children of Peace. Each monarch, president or world leader had to send their sons and daughters to a Precepture where they will be kept as hostages. If those leaders ever declare war on another leader, their children get killed. To make it even more personal, it’s not like the children are brought up completely separated from their parents – Talis makes sure that they all go back home from time to time to create intimate bonds in order to make the decision harder.

Greta is a crown princess who has known the price of peace. All her life, she has known that her death might be just around the corner. But just like the other Children of Peace, she has been

Until one of her best friends, Sidney, gets killed when his country declares war against another. And she knows she is next because she understands the politics back home. All of a sudden, Greta knows terror. Things only get worse when Sidney’s replacement, a boy named Elián is brought in, in chains, raging and defiant. Unlike the other Children, Elián was not brought up controlled and observed. He has not been conditioned to accept the rules. He also doesn’t know that if he breaks them, the entire group gets punished.

The boy is the final catalyst to unleash Greta’s prodigious mind and to open her eyes to see what was before her the entire time. And once that happens, there is no stopping her.

I will start, perhaps unfairly, with the reason why I almost did not read The Scorpion Rules. The blurb is so incredibly misleading – if not necessarily untrue to the story – making The Scorpion Rules sound like yet another one of those run-of-the-mill het romance dystopian YA that I am so tired of. It was only my faith in Erin Bow’s storytelling skills that made me pick it up and holy crap, was this good.

There is nothing typical about this story.

The romance? Lesbian – possibly bi, maybe even poly in the future. When Greta finally opens her eyes, it also opens her heart to the friendships she never embraced and the love who was staring her in the face all this time. Her roommate and eventual lover Princess Xie is equal parts badass and dignified coolness.

The dystopian? Convincing, horrific. The “make it personal” moto is one of the most terrifying premises – because it works. Because it puts people in impossible situations of actual, lived terror. The Children of Peace? MY HEART. Erin Bow’s aforementioned skills shine here once more. This author has broken my heart more time than I can count with her books – for she tends to pull no punches, leave no rock unturned. Her female characters are incredibly well-written with a well-balanced mixture of vulnerability, compassion and badassery. Greta is no different: starting the book as an ice princess in an act of self-defence, the more the story progresses, the more that cool exterior melts leaving her heart open to be broken. Her eyes open to understand the numerous ways that her life has been controlled, curtailed and conditioned. The book starts and she knows nothing at all about these kids who have lived with her for years. The book progresses and those stories unfold.

And then, we have the Unexpected Subplot. Beneath the dystopian story, the immediate conflict surrounding Greta and Elián’s impeding death, we have the contextualised history of Artificial Intelligence. Talis is a monster. But somehow he is also a somewhat sympathetic and funny monster. And then we have the ending: the mindblowing decision that Greta makes is perhaps one of the most surprising twists I have ever had the pleasure (if one can refer to a monumentally dark and profoundly disturbing change, a “pleasure”) of reading.

Finally, it would be remiss of me if I didn’t mention the goats. The goats are hilarious. The Scorpion Rules is definitely a Notable Read of 2015.

What can I say here other than the fact that I COMPLETELY agree with Ana’s assessment of the book?

In a future world where civilization has collapsed and been reborn, where environmental catastrophe has led to war, and war has led to the United Nations allowing a supercomputer Artificial Intelligence named Talis to make suggestions, a new world order is born. Talis, awake and fully in control, starts bombing cities at random to get humanity’s attention. Talis then lays down the hard line and tells everyone that if you want to rule, give me your children so I can hold them hostage and keep you in line. The Children of Peace are taken from their parents and taught by Talis’s automatons and proctors, and are given valuable lessons that will help them rule and lead. Should a nation or state go to war, the children of those warring factions will be killed with little fanfare and no recourse.

For centuries, this process has worked (more or less).

Greta, a princess and future ruler of her land, lives in constant fear that she will be killed, knowing how close to war her country is with its American neighbor to the south. But then a new boy enters the Precepture (hostage from a newly formed and declared nation), and changes everything she knew about herself and the way she views the world.

But The Scorpion Rules?

It is NOT that book.

This is a clinic on subversion, because that’s what Erin Bow does best–she takes the basic expectations attributed to dystopian YA fiction and romance, and then twists them until they are no longer recognizable. And I mean that in the best possible way.

The villain, for example, is no one-note evil monolith–Talis is charismatic and glib, and the “scriptures” or book that the Children of Peace quote from isn’t what you think. The romance isn’t between Greta and Elián, but between Greta and Xie (but it’s not the focus or thrust of this book in any case). And really, the journey here is about Greta’s awakening to her own power and the broadening of her worldview–for she has always known the Precepts School, and has been there since she was five years old. Greta’s voice is powerful in itself; her characterization and her careful concern and methodical thought process is a delight (and heartbreak) to read.

I am loathe to say anything else about the awakenings that happen and the choices that are made for fear of spoilers; suffice it to say that the twists are awesome and shocking, and the effect of the story is profound.

This is another beautiful, thought-provoking book from Erin Bow, and one I absolutely recommend. The Scorpion Rules will absolutely be on my list of notable reads of 2015.