Book Review: The Sorcerer of the Wildeeps by Kai Ashante Wilson

I finished reading The Sorcerer of the Wildeeps and on both cheeks I bore a delta of rinsed skin. 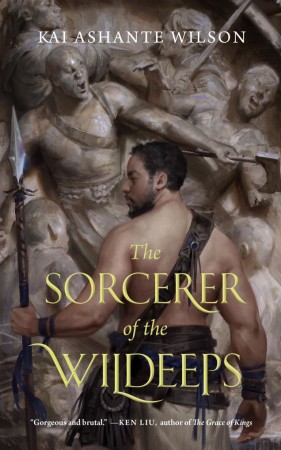 Title: The Sorcerer of the Wildeeps

Critically acclaimed author Kai Ashante Wilson makes his commercial debut with this striking, wondrous tale of gods and mortals, magic and steel, and life and death that will reshape how you look at sword and sorcery.

Since leaving his homeland, the earthbound demigod Demane has been labeled a sorcerer. With his ancestors’ artifacts in hand, the Sorcerer follows the Captain, a beautiful man with song for a voice and hair that drinks the sunlight.

The two of them are the descendants of the gods who abandoned the Earth for Heaven, and they will need all the gifts those divine ancestors left to them to keep their caravan brothers alive.

The one safe road between the northern oasis and southern kingdom is stalked by a necromantic terror. Demane may have to master his wild powers and trade humanity for godhood if he is to keep his brothers and his beloved captain alive.

Why did I read this book: Because of the cover, the blurb, the fact that it was Tor.com’s first novella, etc.

I wish to preface this review by saying I was entranced by this story and I loved it with all my heart – the same heart that was PULLED FROM MY CHEST AND STOMPED ON by its ending. Oh, look: my heart bleeding at Kai Ashante Wilson’s feet.

The Sorcerer of the Wildeeps follows a caravan traversing a dangerous road.

It’s a story about brothers in arms, the army of warriors hired to defend the caravan. The bothers all stem from different backgrounds, with different languages and cultures. They are all men (if there is one major criticism I have for this story is this one: where are all the women?) and they all support and are loyal to one another. They joke, they fight.

And here we have this guy – the narrator – Demane, a big bear of a man, a warrior and also a doctor, a healer. In his own mind and his own language what he does, the way he cures, it is all science and physics. To others, he is a sorcerer.

I mention that Demane is a big bear of a man on purpose. This is a narrative that beautifully subverts expectations around warriors, around the idea of manhood and masculinity. If Demane is a bear, he is a Care Bear. He wants to fix the world’s pain.
He cares deeply for his comrades and above all for their Captain. Isa.

Isa, who like Demane is a demigod, a descendant from immortal beings. Demane is big and strong whereas Isa is smaller, agile and his hair is covered at all times because without his headscarf, his hair would eat sunshine and he would become even stronger. Isa doesn’t speak: he sings. So, it’s a love story too. Between Demane and Isa and from Demane’s perspective and voice we really know what he feels for Isa. It’s harder to tell what Isa feels.

The Sorcerer of the Wildeeps is the first novella published by Tor.com’s new program. It is quite the start for their new publishing venture – this novella is incredibly dense and it’s definitely not an easy read, but it’s ultimately rewarding (as well as devastating) in a myriad of ways.

It’s not an easy read because the narrative is anything but straightforward. It’s nonlinear, intricate, complex, meandering. It is rewarding because the world building is intriguing, the story does wonders with the idea of masculinity and manhood, the main romance is a LGBT one and the way that it explores language is incredible. The latter does add a layer of difficulty because there is a lot of code switching: the narrator thinks in his own mother tongue, but then there is the language he speaks with his comrades, each with their own common usages. But it is oh, so clever.

It is devastating because at its heart, this is a tragedy. And here is where I am conflicted about it and why it took me so long to write this review even though I read this story a long time ago.

The narrative is ambiguous in places: does Isa really sing when he speaks or is that Demane’s love for him that makes him hear his beloved’s voice as song? Is Isa self-destructive because of his past, because of his age? In many ways, the ending is foreshadowed in different ways – in the footnotes, how people tell the tale of Isa, in a later conversation between Demane and him. Because of this foreshadowing, because of the world building and because of who the characters are, this story feels like it couldn’t be anything but a tragedy and the ending feels very organic.

But it is still a tragic ending that happens to the two queer characters in the story (although not, thankfully, because they are queer). And here we go back to the problem of scarcity: in which mainstream SFF is plagued with tragic queer stories and sometimes, it feels as though queer characters never get a happy ending and it is so… frustrating. Sad-making. And I so wished that Care Bear Demane had his happy ending with his beautiful Isa who sang songs and had sunshine hair.

To paraphrase its own writing, I finished reading The Sorcerer of the Wildeeps and on both cheeks I bore a delta of rinsed skin.