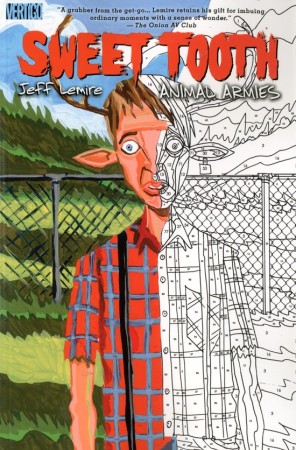 Following on the heels of THE NOBODY, his Vertigo graphic novel debut, writer/artist Jeff Lemire pens his very first ongoing series SWEET TOOTH.

A cross between Bambi and Cormac McCarthy’s The Road, SWEET TOOTH tells the story of Gus, a rare new breed of human/animal hybrid children, has been raised in isolation following an inexplicable pandemic that struck a decade earlier. Now, with the death of his father he’s left to fend for himself . . . until he meets a hulking drifter named Jepperd who promises to help him. Jepperd and Gus set out on a post-apocalyptic journey into the devastated American landscape to find ‘The Preserve’, a refuge for hybrids.

In this third volume, Jepperd begins to form an army to topple the militia camp so he can rescue Gus and the other hybrid kids. But will he arrive too late to save anyone?

Animal Armies, like the In Captivity, follows two major story arcs: that of Gus, at the Preserve, as his kindhearted nature begins to turn colder and harder at the injustices inflicted by very bad men; and that of Jepperd, who finds help from two women he’s helped before, and forms a questionable alliance with hyperviolent biker cultists attack the militia stronghold.

What I love (so far) about Sweet Tooth is that every volume in the series builds upon the prior book without jarring transition–and every volume in the series is better than the one that came before it. Such was true of In Captivity, as we learn the mixed–even honorable–motivations of characters like Dr. Singh and Jepperd. Such is true for Animal Armies, as Jepperd attempts to atone for what he’s done to Gus, by amassing an army of feral biker cultists who worship hybrids, and convinces them to take the militia by lying and promising them the hybrid children. Truly, Jepperd’s game in Animal Armies is to find the strange deer boy who worked his way into Jepperd’s desiccated heart, and find a way to help him.

That’s not to say that everything is all roses for Jepperd and Gus. In fact, it’s just the opposite. And this is very apparent in…

Gus’s Arc
Poor Gus. AGAIN, seriously, poor Gus! In this third volume, he’s starting to mistrust humans, especially adult men, and especially those in power. Dr. Singh has lied to him about letting him go home, Jepperd lied to him about the Preserve. When soft-hearted Johnny, a janitor in the Preserve compound, gives Gus chocolate and tries to befriend the hybrids, Gus starts to show signs of wising up to his human captors. He starts to different, harder decisions – telling Johnny to leave them alone, telling Wendy to hold back when Buddy is attacked. Although these are small things, it’s darker foreshadowing for the future – because Gus already thinks of his father’s gospel as truth, and that he never should have left the woods to seek out others. That humans – especially men – are the monsters his father warned him about.

Favorite New Characters
In this volume, we’re re-introduced to several characters – three humans that I enjoyed very much. Johnny, the janitor at the preserve and the brother of head-runner (and really bad man) Abbot, is an easy favorite. We first were introduced to his character as he helped Jepperd’s breakout in the months before. Johnny is ridiculed by the other militia men, beaten, and otherwise marginalized – but it’s clear that while he has a conscience and wants to do the right thing for the hybrid children (and for Jepperd), he also feels loyalty to his brother and wants to bring him back from the dark place in which Abbot now resides.

The other two standout human characters are Lucy and Becky – both women that Jepperd and Gus have met before in the brothel hotel, and who Jepperd remembers from the Preserve. Lucy was captured and experimented upon, her child cut out of her by Doctor Singh. And though she managed to escape the Preserve, her scars and desire for vengeance and blood (seen from Out of the Dark Woods) is a powerful thing. As is the bond between Lucy and Becky.

Finally…there are the hybrid children. Wendy and Gus deepen their bond in Animal Armies, and we get to see (and feel) more of Bobby. (There’s a particular scene when Bobby tells Gus that he makes him happy. I dare you to read it without feeling tugging of heartstrings. I DARE YOU.)

And…there’s Buddy. Silent, poor Buddy. Without a voice, without a family, Buddy’s story is the saddest of them all.

Bonus Points: Creativity in Storytelling
This volume is (almost) bookended by two scenes without dialogue, voiced over by Dr. Singh. The first, is Singh’s tapes, as he pieces together what he knows about Gus and the pandemic (and flirts with some terrifying hubris – dude, you’re probably gonna have to check that later in the series).

The second scene is when Singh discovers Gus’s father’s bible, and reads the gospel-like predictions he has for his hybrid son. Chilling and incredibly effective.

This third volume also continues the strange shared dream sequences between Gus and Jepperd – it’s clear now that both can see what the other is doing. Not only that, but also the pair seem to be following the words of Gus’s religious father. What’s up with that? I don’t know. I’m excited to find out.

To Alaska, we go.