This month, we tackle the third book in Rick Riordan’s much beloved Percy Jackson and the Olympians series, The Titan’s Curse. 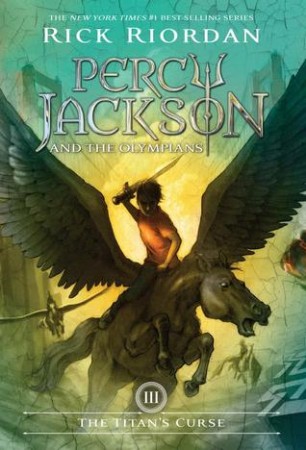 IT’S NOT EVERYDAY YOU FIND YOURSELF IN COMBAT WITH A HALF-LION, HALF-HUMAN.

But when you’re the son of a Greek god, it happens. And now my friend Annabeth is missing, a goddess is in chains and only five half-blood heroes can join the quest to defeat the doomsday monster.

Oh, and guess what? The Oracle has predicted that not all of us will survive…

Stand alone or series: Third book in the Percy Jackson and the Olympians series. 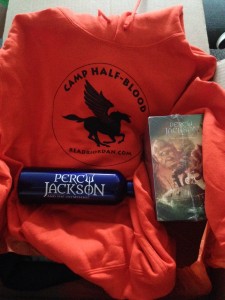 We’ll be posting reviews of the entire original Percy Jackson and the Olympians series over the next three months, plus some other goodies. Check HERE (or #ReadRiordan) to get all of the Percy Jackson goodness.

WARNING: This review contains unavoidable spoilers for books 1 and 2 in the Percy Jackson series. If you haven’t read books 1 and 2, and you would like to remain unspoiled, look away.

Starting a few months after the events at the end of book 2 – The Sea of Monsters – The Titan’s Curse kicks off right in the thick of it with demigods Percy, Annabeth and newly resurrected Thalia on their way to meet their friend Grover and help him locate two new demis and bring them to Camp Half Blood.

Things don’t work out well and Annabeth ends up missing in action. Things get even worse when they meet the Goddess Artemis who ends up carrying the weight of the world on her shoulders. Quite literally.

Our heroes must mount a rescue whilst fighting mythological foes, archetypical monsters, all the while dealing with a prophecy that foretells that one of them – Thalia or Percy – would bring about the end of the Gods. Or maybe save them all. Who knows. Like Apollo would tell you: prophecies are hard, guys.

In this third instalment of the Percy Jackson series, Things Get Really Dark, Really Fast. This is probably the turning point for the series – before The Titan’s Curse, in spite of the arguably portentous tone of the events that took place thus far and the talk about the end of the Gods, monster attacks and the like , there was a certain degree of lightness and mindless fun running through them. In here, people get killed. Injured. Maimed. Taken. These kids have to deal with truly scary stuff and make hard, life-altering decisions. It’s archetypical Coming of Age, Quest, Hero’s Journey all rolled into one. And although Percy is the main character (and Annabeth takes a back seat in this book), the other companions still get their moment to shine.

Similarly, Percy has a tendency to run head first into trouble and this is clearly taken as a flaw – directly addressed as a problem and a potential fatal weakness – his own Achilles’ Heels to keep on topic. The question of heroism – especially the “heroes” of old – is looked at head-on and questioned. The actions of douchebag heroes of old are brought up and thrown in Percy’s face: he has to think about why does he worship Heracles for example when faced with some of his more questionable feats. This is a book that deals a lot with how women – mortals, demi-goddesses – were (are) treated in this world and the ways they found to fight back. I really liked to see Artemis, Zoe, The Hunters and Athena in this instalment and I hope they come back.

When reading books 1 and 2, I remarked on how certain aspects of Greek Mythology had been sanitised for the intended audience, but The Titan’s Curse feels like a more grown-up book that doesn’t exactly sugar coat events in illo tempore without completely crossing the line. Apollo still makes a light hearted joke about chasing wood nymphs though which: no. Nope.

Gods and Heroes are portrayed as petulant and volatile, some of them assuming the body of teenagers to fit their temperament. It suits them and it suits the story. The ending has a nice twist and an even better decision made by Percy: it’s a bold if stupid move, and one that fits this hero and it’s probably going to be his fall. I can’t wait.

Despite my claims to the darkness of the story, Percy’s voice remains youthful and humorous throughout and I can safely say this was my favourite book in the series so far.

Ok, I’m going to be completely forthright: this is also my favorite book in the Percy Jackson series. I freaking love this book.

Why do I love this book?

Allow me to enumerate the reasons.

1. Percy is not the main focus

Up until this point, Perseus Jackson has been the primary focus of the series and the action. He still is the main character–obviously, with the series bearing his name–but Percy is NOT the hero selected for the high-stakes mission of Titans, nor is he the person that necessarily is in charge of the fate of the Gods and the mortal world. Overhanging the series arc at every turn is a mysterious prophecy: one that states that a hero child, a demi-god, of the big 3 (Zeus, Poseidon, Hades) will be the salvation, or the ruin of Olympus and its gods.

Percy is not the only child of the prophecy.

Like Harry Potter and Neville Longbottom, there is another–in this book, that other is Thalia, newly resurrected daughter of Zeus, turning sixteen in a short time but still frozen in the mind of her twelve-year-old self.

2. It is ALL About The Ladies

Don’t get me wrong–I very much love Annabeth and she is my favorite character of the series. But book 3 expands the vision of the demi-gods and their parents by exploring the Goddess of the Hunt, Artemis, and her Hunters. Think a female version of Peter Pan and the Lost Boys–in order to join Artemis, females must vow their fealty, their decision never to grow up, and forsake male relations or attention. In return, these Hunters are granted immortality–lest they fall in battle. In book 3, Artemis is a main character, but her secondhand commander, Zoe Nightshade, is the true focus. Zoe is fierce and intelligent, mistrusting of others but with good reason. I love the reveal of her character over the course of the novel, her backstory, and the reasons for her mistrust of Percy or any hero. (As Ana says, actions of douchebag heroes of old come to terms here. That’s cool.)

Beyond Artemis and Zoe, however, the real main character in this book is Thalia.

Daughter of Zeus, faced with a HUGE decision–to either believe in her father and his kind, or to forsake them forever. Thalia is a leader and a fighter; she has sacrificed her life for her friends, and she desperately wants to save Annabeth from certain death. She also, however, is tempted by her former dear friend Luke… and her choice is the one that defines the course of this book.

There are several other female characters who play significant roles in this book, beyond these three–including a mortal who can pierce the mist that the gods weave, a new demigod whose parentage is unknown until book’s end, and Athena herself.

Athena is wise, terrible, and powerful, by the way. And I love her.

3. The stakes are raised (by a LOT), and heroes are force to a reckoning

As I was saying about Athena, things get REAL in this book. The fate of Olympus truly is at stake, and the Gods face the real possibility of a great war that could end their reign. The heroes are the tools of the Gods–this is clear now, more than ever, in this book. Tools are not necessarily to be trusted; they are used. And the demi-gods Percy, Annabeth, and Thalia sorely realize this in The Titan’s Curse.

And, as Ana says in her part of this review, fatal flaws are called into play here. Annabeth’s is pride–we knew that from the first book. Luke has his serious daddy issues.

And Percy? Well, Percy learns what his Achilles Heel is, thanks to Annabeth’s mom.

Finally: This is the equivalent of Prisoner of Azkaban, for me.

I mean that in all the best ways. Azkaban was my favorite of the Harry Potter books, and The Titan’s Curse similarly marks a change of tone and shit gets REAL.

I loved it the first time, I loved it this time, and I cannot wait to continue this epic reread.