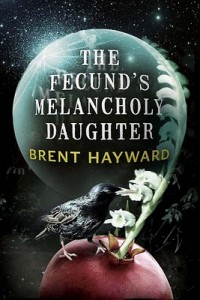 The city is crumbling… Clouds over Nowy Solum have not parted in a hundred years. Gods have deserted their temples. In the last days of a dying city, the decadent chatelaine chooses a forbidden lover, separating twin outcasts and setting them on independent trajectories that might finally bring down the palace. Then, screaming from the skies, a lone god reappears, briefly, and a limbless prophet is carried through South Gate, into Nowy Solum, with a message for all: beyond the city, something ancient and monumental has come awake!

Why did I read this book: Moment of truth: sometimes, my modus operandi is really simple. A few weeks ago, Thea posted about this book on her radar. I was taken with the cover and its (wonderfully weird) title and I bought it the moment I came across a copy at the book store – without even reading what it was about.

Above the clouds, three female astronauts come across a Mother and one of the Gods briefly reappears in the skies; across the desert, a limbless, hitherto witless child awakens to prophesize the return of an ancient creature, just as the chatelaine picks a forbidden lover with melancholy running in her veins, inadvertently setting in motion the beginning of the end.

Ah. New Weird. We have such a troubled relationship. The idea of blending Science Fiction, Fantasy and Horror with weird components is really interesting and attractive in theory but many times I have found the execution of those stories to be disappointing. And in the majority of these cases, the disappointment comes from noticing that many times the “weird” in the equation is there just because – random objects throw in, without any relevancy to the story.

I am pleased to say that this is not the case with The Fecund’s Melancholy Daughter: the weird aspects of the story are definitely present but they never feel like they are artificial, isolated objects within the story. Quite the contrary, they are an intrinsic part of a surreal, puzzling world. For example: the chatelaine collects pets, all of them birthed by the Fecund based on the chatelaine’s dreams. Amongst them a cherub, a baby with wings whose eventual kidnapping is central to the main storyline. The collection itself has a reason (as disturbing as it sounds) and so does the very existence of the Fecund – a grotesque monster, who has been imprisoned for centuries.

Another instance of the weird is how the people in Nowy Solum are either “hemo” or “kholic”. The first have regular, red blood running through their veins. The latter bleed black fluid, or melancholy, both a physiological condition and a psychological state. The implication of how melancholy affects people by making them less human in their presumed lack of emotion is partly the reason behind the social divide and their outcast status. The “kholics” do all the menial work and are terribly ostracized. Here the “weird” is basis from which to explore racism, artificial social stratification and what happens to a society in which the majority of its people live in terrible conditions. One of the best sequences in the book is this very short yet moving portrayal of a young desperate mother whose son is about to undergo the ceremony that establishes what kind of fluid he has in his veins. The fact that she is an impoverished “hemo” with a hard life only serves to reveal how this world is coming apart at its seams.

One could even possibly describe the storytelling as weird itself: reading the novel feels like putting together the scattered pieces of a puzzle without having any idea of what the main picture looks like. From its opening sequence, the story progresses by alternating between several characters’ points of view with a little bit of an intruding omniscient narrator added to the proceedings. It is a multi-tiered world (below clouds, above clouds, beyond clouds) and it is also a multi-tiered narrative. Sometimes this proves to be a bit confusing because of how fragmentary the narrative is.

But in the end, when it becomes clear how well constructed the story truly is, when all different threads converge into a whole, it is easy to see the brilliance behind the plotting and how well developed it truly is. However, I have to say that I appreciate this brilliance in a distant, detached, purely intellectual way. Although I think the storytelling is successful, even though I appreciate the themes that are explored here, I found myself not really invested or engaged with the people, or the city, or the setting. Perhaps, the very nature of the book, the way that the story and characters are scattered around are responsible for that. I felt that the characterisation suffered because of it and was only skin-deep. Not to mention that I had problems with the portrayal of a couple of characters.

Another thing that gave me pause when reading the novel was how, after the chatelaine and her new female lover had sex, the chatelaine walked around for hours with – and this was repeated a few times – “juices” trickling down their thighs. First of all: Ew. TMI that was not really necessary to the execution of the plot. Second: and please forgive me the crassness of my ensuing statement but even though some women can ejaculate when orgasming, we lack the instrument to ejaculate inside another women’s body to the point where this other woman will be walking around with juices trickling down her thighs!! Seriously, this is Biology 101.

That both aspects that made me most uncomfortable about the novel involved the depiction of female characters is quite troubling and somewhat diminished the positive impact that other aspects of the novel had.

Rolling lazily, laterally, the fecund let out a sigh. She half-closed one red-tinged eye. Her cascading body, strung with the weeds of her cell, was clearly swollen. Ready, it seemed, to burst. She said:

“I suppose we could begin at other points, if you’d prefer. Perhaps we could start with the chatelaine, finding herself, one morning, feeling strangely refreshed and clearheaded for a change?” The monster’s voice could be very quiet when she wanted it to be. “But before we get too far with this story, I’d like to ask you a personal question, if I may?”

The trilling sound of frogs.

She cleared her throat, veiling lightly a sneer, and put on airs: “Once-noble creature, marvel of marvels, viceroy of your domain—pushed forth from a thin caul into this shrouded world—what do you feel? Between trembling thighs, as you’re pushed forth, or held aloft, above a steaming corpse, what do you see? Tell me,
when you look out of those beady eyes?”

Stretching, like a huge green dog, butt in the air—and yawning while doing so—the fecund showed rows and rows of needle-sharp teeth. Then she settled, also like a dog, circling twice, and again, before finding comfort in the muck.

“I know you’re nothing but bones and flesh, with various combinations of blood or choler or melancholy in your veins. And you’re tiny things—mere mortals, as they say—subjected, from day one, to a host of calamities and infirmities. The list is endless. Pride, envy, desire, ambition. Plagues, insecurity. Raging disease. Loss. Factions and hatred among your own people! Ignorance and war. You humans fascinate me.”

Still no response, save the thrumming of insects and the quiet splash of an animal—a fish, perhaps.

“And yet,” the fecund continued, her unclear question devolving into a series of others, and from there into a customary ramble, “throughout these trials, time keeps moving, past your traumatic birth and childhood (which was most brief, spent hungry and snotnosed in egocentric oblivion), past your self-indulgent adolescence (when you thought you could change everything, and that there was a small chance misery might pass you by), moving faster and faster, past your adulthood (if you were fortunate enough to make it
that far), finally dragging the remaining few of you into old age and sweeping you along, toward eschaton!”

As the last word echoed, the fecund shivered with what could only be mock dread. “Tormented race! Abandoned race! Oh, clouds have closed in, all right! (Or so they say: all I see when I look up is this damned stone ceiling.)”

Ebook available for kindle and kobo

Book Review: This Duchess of Mine by Eloisa James