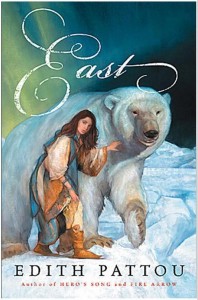 Rose has always felt out of place in her family, a wanderer in a bunch of homebodies. So when an enormous white bear mysteriously shows up and asks her to come away with him–in exchange for health and prosperity for her ailing family–she readily agrees. The bear takes Rose to a distant castle, where each night she is confronted with a mystery. In solving that mystery, she loses her heart, discovers her purpose, and realizes her travels have only just begun.

As familiar and moving as “Beauty and the Beast” and yet as fresh and original as only the best fantasy can be, East is a novel retelling of the classic tale “East of the Sun, West of the Moon,” a sweeping romantic epic in the tradition of Robin McKinley and Gail Carson Levine.

Why did I read this book: The “East of the Sun, West of the Moon” retelling is becoming a popular one, and it’s a tale that I’m rather fond of. After reading Ice by Sarah Beth Durst earlier this year, I was on the lookout for other retellings, and Edith Pattou’s East was the title that kept popping up.

Ebba Rose was the name of our last-born child. Except it was a lie. Her name should have been Nyamh Rose. But everyone called her Rose rather than Ebba, so the lie didn’t matter. At least, that is what I told myself.

East is the story of a mapmaker turned farmer, his superstitious wife, and their seven children. After the death of their steadfast, East-born daughter, Eugenia is determined to have another East-facing child. But when their eighth child, Rose comes into the world, she is delivered facing the dreaded North – a mistake that Rose’s mother makes sure to cover up and never speak of again, much to Rose’s father’s guilt. Throughout her childhood, Ebba Rose (though, to her father she is always Nyamh Rose for her true Northern nature) is adventurous, brash, and ever-wandering, much to the fear of her protective mother and older brother Neddy. Over the years, Rose’s family situation grows ever more destitute and precarious…and one desperate night as her elder sister Sara lies deathly ill, a great white bear (Rose’s supposedly imaginary friend from childhood) appears and offers an irresistible exchange: Sara’s health and the family’s success…for Rose. While Rose’s family (with the exception of her mother) are adamant against her going, Rose is fascinated and excited. She’s never fit in with the domestic, provincial life her family has, and she’s thrilled at the prospect of adventure and the unknown. And, when Rose learns that her birth nature was a lie and that she is truly a wild and wanderlust-filled Northern daughter, she makes up her mind to leave her home behind. Over land and sea, Rose and her great white bear travel until they reach an enchanted castle carved into a mountainside of ice and rock. Rose’s new home is luxurious – food appears as if by magic, beautiful fabrics and looms appear and occupy Rose’s thoughts, and two quiet servants make sure all of her needs are tended to. Every night, Rose sleeps in an impossibly dark room, and an unseen stranger climbs into her bed. Try as she might to see the stranger’s face, or to speak, she suspects there must be some kind of magical curse at work.

When Rose does figure out how to see in the darkness – with the indirect conniving aid of the creator of the spell, and Rose’s malleable, superstitious mother – Rose must journey far and hard to right the painful wrong her curiosity has wrought.

So, as you can see, East is pretty true to the Norwegian fable – girl meets bear, goes to castle, curiosity killed the cat and so she’s gotta save her Prince in Peril (I always preferred the Prince in Peril to the Damsel in Distress). By that measure, yes, East is familiar and predictable – it is a fairy tale, after all! BUT, that said, Ms. Pattou’s more traditionalist retelling of the classic works because of the sparse beauty of her writing, the alternating point-of-view narrative, and spunky heroine. (And really, who doesn’t love a traditionalist fairy tale every once in a while – especially in a literary landscape increasingly filled with wilder, crazily deviating retellings?)

While I didn’t care for some of the dire foreshadowing (e.g. “We couldn’t have been more wrong,” or “I wish that I hadn’t,” etc ad nauseam), especially considering these doom-gloom drops hardly amounted to much, I did love the style in which East is written – with sort of flash-chapters told from the voices of Rose’s Father, Neddy, Rose, The White Bear, and The Troll Queen. Each character has a distinct voice, and each is beautifully textured, from the careful Neddy and doting father, to the impassioned Rose, the poetic bear, and the selfish, enamored queen. The downside to this narrative technique, however, was that the alternating short chapters could feel somewhat episodic and stilted. Still, for the most part, I loved being able to see through different characters’ eyes, although I wish the chapters could have stuck with each narrator for a slightly longer stretch of time.

Of course, so far as characters go, this is most assuredly Rose’s book. And Rose is really cool. One of the things that has always appealed to me about this particular fable (or Beauty and the Beast, for that matter) is how it is the heroine that gets off her ass and saves her hero. (Of course, there are aspects of the myth that bother me too – such as the woman’s punishment for tasting the forbidden fruit – aka looking upon her sleeping visitor – or how only the right bride can wash the tallow out from her bridegroom’s shirt, but that’s not really the point) In East, Rose’s adventures only begin with the Great White Bear – they flourish when she’s out on a Norse ship stranded at sea, or traveling across a frozen tundra, or traversing an impossibly slick ice bridge, or fooling her captors and spinning troll-costumes in order to save a man (and all humans) imprisoned in a kingdom that lies east of the sun and west of the moon. That’s gutsy stuff, and Rose handles her impossible task with grim determination. The only character that I wish was a little more fleshed out was The White Bear himself. While I did like the way the story tied together by the ending (the awkwardness between Rose and the man that was the bear), I felt like we never really got to know this character. As a bear, his thoughts are poetic, short and lyrical – very effective – but I wish there could have been more to his human nature too. On the other end of the spectrum, I also appreciated that while the Troll Queen is clearly spoiled and manipulating, she’s not really vilified or portrayed as EEEEEVIL. She’s obviously not a nice lady…but she’s not human either, and as such, she doesn’t act like a human.

Also, on one final note on characters, I will simply say – I heart Tuki. Tuki rocks.

There are a number of beautiful images that East conjures up, by virtue of Ms. Pattou’s romantic writing style and descriptions. The killing fields of the Trolls, for example, or the image of a beautiful, white queen with her voice of rocks and skin of granite. This, along with the magical elements, the mother’s superstition, the wonderful integration of “birth direction” determining personality traits/destiny are marvelous, memorable additions that make East stand out.

And yet…for all this praise, I did feel like something was missing from the book. I’ll put it this way – East put me in the mind of Robin McKinley’s Beauty. Both are solid, lovely retellings, but both are missing that extra OOMF. That WOW factor that makes a truly wondrous retelling work (see Juliet Marillier’s Wildwood Dancing or Shannon Hale’s The Goose Girl for examples of what I’m talking about). Though it wasn’t quite at that level, East is beyond any doubt the best retelling I’ve read of East of the Sun, West of the Moon, and most CERTAINLY worth reading. Definitely recommended, especially for those looking for an adventurous, romantic fantasy.

Once on a time there was a poor farmer
with many children.

EBBA ROSE WAS THE NAME of our last-born child. Except it was a lie. Her name should have been Nyamh Rose. But everyone called her Rose rather than Ebba, so the lie didn’t matter. At least, that is what I told myself.

The Rose part of her name came from the symbol that lies at the center of the wind rose-which is fitting because she was lodged at the very center of my heart.

I loved each of her seven brothers and sisters, but I will admit there was always something that set Rose apart from the others. And it wasn’t just the way she looked.

She was the hardest to know of my children, and that was because she would not stay still. Every time I held her as a babe, she would look up at me, intent, smiling with her bright purple eyes. But soon, and always, those eyes would stray past my shoulder, seeking the window and what lay beyond.

Rose’s first gift was a small pair of soft boots made of reindeer hide. They were brought by Torsk, a neighbor, and as he fastened them on Rose’s tiny feet with his large calloused hands, I saw my wife, Eugenia, frown. She tried to hide it, turning her face away.

Torsk did not see the frown but looked up at us, beaming. He was a widower with grown sons and a gift for leatherwork. Eager to show off his handiwork and unmindful of the difficult circumstances of Eugenia’s recent birthing, he had been the first to show up on our doorstep.

Most of our neighbors were well aware of how superstitious Eugenia was. They also knew that a baby’s first gift was laden with meaning. But cheerful, large-handed Torsk paid no heed to this. He just gazed down at the small soft boots on Rose’s feet and looked ready to burst with pride.

Additional Thoughts: As I mentioned before, East is one of many retellings of this particular fairy tale. This year there was also Ice by Sarah Beth Durst, or Sun and Moon, Ice and Snow by Jessica Day George. 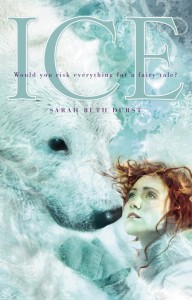 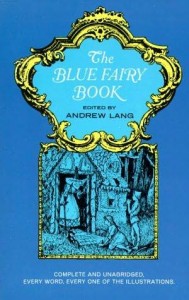 Of course, the original was collected by Andrew Lang in The Blue Fairy Book – and variations of the tale have appeared throughout time, from Ancient Greece to J.R.R. Tolkien.