On September 21st (tomorrow!) we will publish Fighting Demons by S.L. Huang–sequel to Hunting Monsters, the very first short story we published on The Book Smugglers. In this continuing story, Xiao Hong and her mother travel eastward to find Rosa–and discover a war in the process. 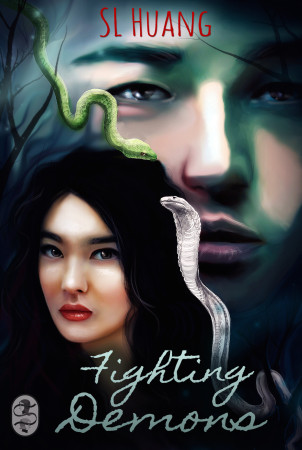 Give a warm welcome to S.L. Huang, everyone!

I have often seen authors spiral into a tizzy about writing races or cultures different from theirs. “But what if I get something wrong?” they cry. “People will criticize!”

I don’t know whether to laugh or weep at that, because these people have clearly never seen one of us “critics” try to write about elements over which our blood supposedly gives us authority.

I was—and am—about 9875235 times more nervous about writing a story based in my own cultural heritage than I ever have been about writing anything, ever. I spent more time in research for this story than I have for any novel. I read every translation of the original tale, every piece of related literary criticism in English I could find. I watched Chinese adaptations of the legend on YouTube. I sought out additional Chinese betas. At times I felt almost reduced to tears because I can only read English and what if I was writing about something I didn’t truly understand?

How do I write for primarily non-Chinese readers without flattening all of Chinese culture into a shallow, singular narrative?

What if I write something that only reinforces stereotypes, despite my best efforts?

Because I’m mixed, because I’m diaspora, do I even have the right?

I’ve talked to other POC who completely understand this. We feel an additional weight of being a representative, that if we don’t “get it right” we’ve let down our own people.

Like many of my short stories, Fighting Demons is, at its heart, a tale about something deeply personal to me. In this case, it’s about my relationship with my father.

This was a story I had to write eventually, in one form or another.

Layers upon layers. Many brain cycles, language classes, plane flights, and revelations. A lot of pain. A lot of tears. A lot of clinging with my fingernails to pieces of myself I’d never fully understood, and may never understand.

Like me, Xiao Hong has been raised by an immigrant parent continents away from where that parent was born. Like my father, her mother has assimilated on the surface, but underneath is still a hard knotted bundle of every strand of her history, a core she wouldn’t want to burn out of herself even if she could.

And in Meng Jiao is my journey to understanding and accepting my straddled lineage and how it impacts me. In Meng Jiao is my desire to respect where my parents come from, while still being able to say to them, “This is who I am” with no pretense, utterly vulnerable.

I’m not there yet. Like Meng Jiao, it will be the hardest thing I’ll ever do—if I ever find the courage.

There’s a conversation I’ve had happen multiple times, particularly in college. I’m talking to a new friend who’s of East Asian or Indian descent. The topic turns toward childhood, and one of the participants starts struggling to express part of their upbringing. Then this happens:

The other person, sympathetically: “Asian parents?”

The first person, with a weighted nod: “Asian parents.”

This is not about Tiger Moms or straight-A’s or playing the violin as a child, or whatever stereotypes it might conjure. No. It’s about a peculiar mixture of love and obligation and pride and resentment and gratitude and guilt, one that always feels just similar enough to vibrate in one’s heart like a harmonic.

I don’t know that I did all this justice in Fighting Demons. I think I may have captured only a single facet of it—I may have to write about it again, and again. But I hope I have not done it injustice.

Both Meng Jiao’s and Xiao Hong’s filial narratives are optimistic, in the end, and unrepresentative of anyone but them. Whatever they’re searching for with their parents, whatever cultural weight complicates those relationships, they ultimately have to navigate their journeys as individuals.

Maybe they won’t ever figure it all out. Maybe the familial bonds they yearn for will never come to be.

But maybe they will.

I can believe in it for them, even when I doubt it for myself.

Fighting Demons will be published officially on September 22, 2015. You’ll be able to read the short story in full for free here on The Book Smugglers, but we’ll also have a DRM-free ebook (EPUB, MOBI) that contains the story as well as a Q&A, and an essay from the author available for purchase on all major ebook retail sites.

Add the book on Goodreads, and read Fighting Demons for free online on August 25, 2015.

And if you haven’t read Hunting Monsters yet, give it a read right now!