Only four issues into this new comics and my love for it knows no bounds. 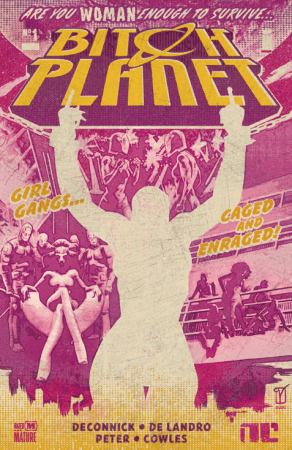 From a storytelling perspective, Bitch Planet takes place in a horrifying dystopian future where white men run the show and non-compliant women are sent to another planet, to an Auxiliary Compliance Outpost – AKA Bitch Planet. The non-compliant are the criminals, the guilty, the women – most of them minorities – who don’t conform in a myriad of ways. What constitutes “criminality” and “non-conformity” in this world are as arbitrary as you can imagine in this type of scenario: it’s obvious that the system is rigged against women from the offset.

And because definitions and comparisons are sometimes useful, I want to say that Bitch Planet is kinda like Orange is the New Black in space. But this would be an apt description only if I add: Piper gets killed off in the first episode so instead of focusing the story on the privileged white girl, we get a story that focuses on the marginalised characters. Then you add Big Brother and an exploitation society, then pile on top of this all kinds of shit that women have to face in a patriarchal society which includes but is not limited to, pressure about how one looks, and a budding background storyline that will see the inmates teaming up to play in the Megaton – a game that appears to be a question of life and death with compulsory viewing and participation – and then possibly we have an approximation of what Bitch Planet is like. Maybe. 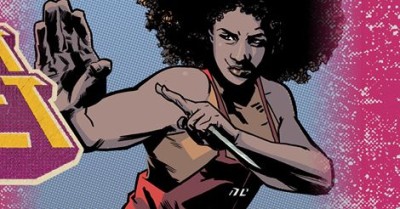 With only four issues out so far (the fifth comes out now in May), it’s very early in the game to see where this is going. With a promised 30 issue to cover the entire arc, the creators are at the moment playing a long game, taking their time to build up the backstory and the characters as well as a futuristic world that is simultaneously far-fetched and an entirely unrealistic extrapolation of our current society. This makes it clear that Bitch Planet is as much a conversation with our present as it is with our future and this is made all the more obvious when it comes to the extra materials included with each issue. There is not only an afterword by the author on writing the comics but also a double-spread essay written by a guest author on topics pertaining to feminism for a feature called Bitches Be Like.

To add to the cool factor, every third issue will feature a guest artist with a focus on each of the characters’ backstory. The first of those centres on Penny Rolle who is sent to Bitch Planet for “repeated citations for aesthetic offenses, capillary disfigurement, and wanton obesity.” Much of this issue is flashback, a harrowing look at the character’s childhood and the growing pains of a mixed-race, fat woman who by the end of the issue triumphantly shoves her unrepentance up patriarchy’s ass. Penny is also calmly judging you judging her: 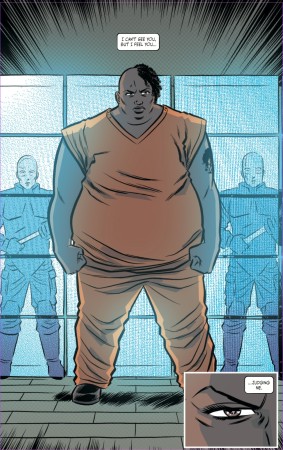 Bitch Planet is an overtly intersectional feminist comics that offers more than its ongoing story. With an appealing packaging where its extra materials are as important and exciting as what’s within the covers, Bitch Planet is unabashedly loud, proud, in-your-face, angry feminism. It’s fucking glorious.

The point I am trying to make is: only four issues into this new comics and my love for it knows no bounds. Get it, read it, relish it.

Over at Kirkus: Rolling in the Deep by Mira Grant