We’ve got some really cool news to share today on behalf of Solaris Books and editors Mahvesh Murad and Jared Shurin!

Djinnthology: a collection of stories and tales inspired by the unseen world

Introducing the first-ever anthology of original fiction inspired by the Djinn, edited by Mahvesh Murad and Jared Shurin.

Jinn – or djinn! – have been a fascinating part of many cultures for centuries. Every country touched by Islam has their own version of these interesting mythological figures embedded in their cultural heritage: including Saudi Arabia, Pakistan, Malaysia, Egypt, and even parts of Africa.

Nor has the West gone without. The Djinn have been a beloved (if overlooked) part of English and American fiction as well – more than simply Aladdin and I Dream of Jeannie! Djinn have appeared in classics of modern fantasy by Neil Gaiman and Tim Powers, as well as the acclaimed recent books by Helene Wecker and G. Willow Wilson.

Across the world, the Djinn have been presented as mischievous, powerful, devious, mysterious, good and evil, majestic, devilish and more… but despite their fascinating history and incredible cultural impact, the stories of these ‘hidden people’ have never before inspired a contemporary anthology.

Coming for spring 2017 from Solaris Books, Djinnthology is an exciting, new collection of original stories inspired by the history of these supernatural creatures. Speaking of his excitement about the project Solaris Editor-in-Chief has said “Jared Shurin and Mahvesh Murad are not only editors of exceptional taste, but they are also amongst genre’s newest champions – showing how valid a form of literature and expression speculative fiction is, and taking genre fiction forward in leaps and bounds with what promises to be a diverse, fresh and exciting anthology.”

Set to feature best-selling and upcoming talent from around the world, Djinnthology will be an eclectic and fantastical anthology collection, prefaced with a comprehensive and insightful introduction to the importance of Djinn and their extensive history that will provide new readers with an accessible window into the unseen world of the Djinn, whilst also setting the tone for this exciting and original new collection.

For editors Murad and Shurin this will be “a wish come true,” adding in a joint statement “we’re really excited to create new stories inspired by some of the world’s oldest myths, especially as it gives us a unique opportunity to work with talented writers from all backgrounds, from all over the world.” They also apologise for this pun. 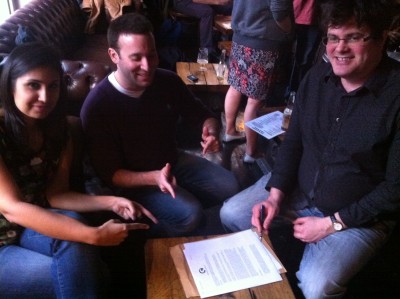 Jared and Mahvesh signing their contract

Mahvesh Murad is a book critic. She was the host of the radio show 89 Chapters for 7 years, talking about literature on CityFM89, Pakistan. She currently hosts Midnight in Karachi for Tor.com and reviews for, amongst other places, Dawn, Tor.com, Strange Horizons and Pornokitsch. Mahvesh is currently editing the latest volume of the award-winning Apex Book of World SF.

Jared Shurin has edited or co-edited ten anthologies of original fiction in conjunction with Tate Britain, the Royal Observatory, the Egypt Exploration Society and others. He has been a finalist for the British Science Fiction, Shirley Jackson and Hugo Awards, and twice won the British Fantasy Award. In 2013, he was selected as one of the Guardian’s top 10 ‘Pioneers and Innovators’ in publishing.

Djinnthology: a collection of stories and tales inspired by the unseen world of Djinn mythology will publish in the UK, US and Canada in spring 2017 from Solaris Books.

Loncon 3: Where you can find us!