Who: Gavia Baker-Whitelaw, a writer from Glasgow, Scotland. She currently works for the Daily Dot as a geek culture reporter, and blogs about film and costume design under the name HelloTailor. Her work has appeared in Empire Online, Wired, Bleeding Cool, Film Divider, BBC Radio Scotland, and various anthologies. She is also the Managing Editor of Big Bang Press, which publishes original novels by fandom authors. You can find her on Twitter at @Hello_Tailor.

Please give it up for Gavia, everybody!

Merry Smugglivus, everyone! Incredibly, the Book Smugglers allowed me total creative control over what I could recommend in this post. Little did they know they would receive a lengthy screed on a single film. Not just any film, but one that was approximately 40% action sequences, starred an amnesiac cyborg as one of the main characters, and is the second installment in a multimillion dollar Hollywood franchise. Art cinema, this was not.

And so, as a kind of dubiously-nutritious palate cleanser between the many awesome book rec posts we’ve read this month, it’s time to talk about the most important movie of 2014: Captain America: The Winter Soldier.

CATWS (as we in the business call it) is a sequel to Marvel’s Captain America: The First Avenger, a film in which Chris Evans punches Fake Hitler during a 1940s dance montage. If that isn’t enough to sell you on it, Elrond plays a character named the Red Skull, whose signature move is peeling off his own face to reveal, yes, a red skull. It was not one of Marvel’s finest works, but it holds a special place in my heart for reasons that will soon become apparent.

The sequel saw a different creative team take over, and instead of World War II shenanigans (albeit with a touch of tragedy because, well, War) we got one of the most depressing superhero movies in recent memory. To set the tone, here’s an aptly-named fanvid inspired by the first Captain America movie:

Guardians of the Galaxy made a buttload of money for Marvel this year, but CATWS was the movie that really revved fandom’s creative engine. Why? My one-word answer would be “misery.” Fanfic people love misery, and this movie provided that in abundance.

The First Avenger was already pretty downbeat for a superhero movie, ending with Steve Rogers, A.K.A. Captain America, crashing a plane into the Arctic in towards the end of WWII. He’s left for dead until 2012, when he gets dug out of the ice and joins the Avengers. Everyone he used to know is either dead or in a nursing home, and the entire world has changed in his absence.

This would be hella traumatising for anyone, but Captain America is a guy in his early 20s who literally just got out of a warzone, and who was physically transformed from a 90 lb weakling to a muscular supersoldier just a few months ago. Basically, he’s one fucked up dude. Which is an interesting starting point for a character who is second only to Superman in terms of do-good wholesomeness. 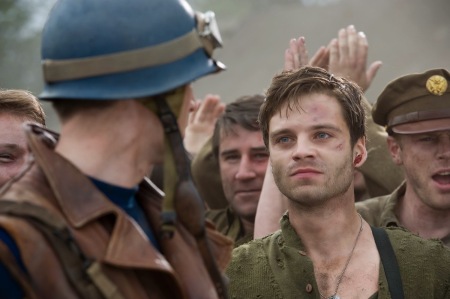 There are plenty of “dark and gritty” superhero movies out there, most of them apparently based on the idea that the most mature and sophisticated way to do a comic book adaptation is to make everyone a total asshole. The Captain America franchise neatly screws with this logic by being unabashedly serious, but starring a character who is superheroic to the core. The world may be a steaming pile of shit, but Steve Rogers will always do the right thing, no matter how difficult it is. And in CATWS, it’s really fucking difficult.

For this reason, the Captain America franchise has inspired everything from propaganda posters to cutesy romance fic to things like American Captain, a cult webcomic about Steve Rogers’ therapy sessions in the 21st century. (Canonically, Steve Rogers trained as an artist, which allows American Captain to break the fourth wall in the style of artists like Robert Crumb and Alison Bechdel. It’s smart, sad, and very, very good.)

The “Winter Soldier” title refers to Bucky Barnes’ new codename, but less directly to Steve Rogers himself. If you’re not familiar with the Winter Soldier story, imagine the emotional impact of Sherlock Holmes’ return from the dead — except instead of returning alive and well, Holmes has been turned into a cyborg assassin and has no memories of his former life. Oh, and his one mission is to murder Watson and everyone he holds dear.

The first Captain America movie sees Bucky fall to his death, but CATWS reveals that he’d actually spent the past seventy years being experimented upon by the Nazi cult/terrorist organization HYDRA. Bye bye Bucky, hello agonizing psychological torment (and hello Winter Soldier). This is a prime cut of superhero comics action: totally ridiculous, but totally devastating at the same time.

The film constantly draws parallels between the two characters. Steve Rogers, asthmatic dweeb, volunteers to be a medical experiment in order to fight in WWII, while the hale and hearty Bucky Barnes may well have been a conscript. Captain America constantly disobeys orders in order to do the right thing, while the Winter Soldier is strapped down and brainwashed into becoming a perfectly obedient slave, a weapon without free will.

Their kryptonite, of course, is each other. Seeing Steve’s face is the thing that finally messes with the Winter Soldier’s drug-induced amnesia, setting Bucky free from HYDRA’s control. As for Cap, the Winter Soldier is his breaking point. After years of fighting every enemy he can get his hands on, he essentially gives up. He can’t bring himself to kill Bucky either, and the film’s final fight scene sees Captain America lie down and stop fighting. The explosions all around him are as bombastic as the finale of any other superhero movie, but the tone is far from victorious.

I realise that I’ve been talking about the Steve/Bucky relationship for several hundred words now, and yes, there is a hell of a lot of fanfic and fanart about those two. But this isn’t a movie whose fandom is based entirely on one slash ship (or friendship, if you’re going to be strictly canonical about it). CATWS is also impressively smart and layered for what it is, creating a far more coherent commentary on real-world political events than The Dark Knight Rises ever managed. And perhaps more importantly, it strays from the tired old formula of only introducing female characters as love interests.

I love comic book adaptations, but diversity is not one of this genre’s strong suits. The Marvel franchise does at least include its fair share of well-written female characters, but it’s still unfeasibly white. CATWS is probably the best in both regards, doing away with love interests and instead giving Sam Wilson (A.K.A. Falcon) the romantic meet-cute story arc with Steve Rogers. He is basically the one ray of sunshine in the entire thing.

Meanwhile characters like Black Widow, Agent 13, Maria Hill, and Peggy Carter have their own independent roles to play, and aren’t hampered by godawful gender-specific storylines. CATWS doesn’t exactly punch holes through the Bechdel Test, but it at least gave us Scarlett Johansson in the best female superhero role I’ve seen in years. It’s just too bad there are a bunch of messy contract negotiations blocking the way of a Black Widow solo movie.

To my horror, there are now 31 pages of posts on the CATWS tag of my Tumblr account. Sure, most of that is reblogs, but it’s still pretty terrifying. What did this movie do to me? What did this movie do to us all? Marvel movies always have a certain geek culture cachet, but Captain America: The Winter Soldier really managed to get its claws in. Several of my friends wrote literally hundreds of thousands of words of fanfic, and I somehow churned out a seven-part review/analysis of the movie. There’s no way I’d have time to consume everything that’s been inspired by this movie so far, but hopefully these recommendations provide a decent primer on what CATWS fandom has to offer.

Modern Careers in the Information Sciences (and Other White Lies), by melannan — Some cute missing scenes from the movie, from the perspective of everyone’s favourite type of person: a librarian.

lilylunastardust’s trailer for Enfants de la Patrie, a fictional movie about Captain America, slays me every time. Full disclosure: I co-wrote the fanfic that inspired this fanvideo, Steve Rogers at 100: Celebrating Captain America on Film, although I only wrote about a fifth of it.

One of the things I find most fascinating about the Captain America mythos is that in the comics and movies he’s already a legend in his own lifetime, with all sorts of political and pop-culture baggage attached to his public image. Plenty of Captain America fanfic tackles things like him having to deal with press attention and fandom, or coming to terms with the way historians and politicians have reinterpreted his image for modern audiences. (In fact, the Avengers movie introduced the idea of Captain America fandom in the form of Agent Coulson, a topic covered by untold number of fanworks, such as in Track This Thread by rageprufrock.)

The Road Toward, by Zoecite — Sam/Steve isn’t as popular as Steve/Bucky, but it’s an ideal pairing for the type of stories that don’t require thousands of words of emotional torment before anyone can get it together. Plus, it’s an ideal opportunity for road trip stories, because the movie ends with Sam agreeing to help Steve bring the Winter Soldier in from the cold.

Regarding which Steve/Bucky fic to recommend, I became paralyzed with indecision. This fandom has produced such a vast number of lengthy and well-written explorations of these two characters that I barely know where to start.

My friend Erin recommended a few in her Smugglivus post earlier in the month, and I can safely recommend everything by OddityBoddity (perhaps beginning with The Ones Who Wait, a short story about Bucky bonding with other war veterans at the gym). The Dud by nimmieamee is a wonderful and well-researched look at Steve and Bucky’s childhood in Depression-era New York. we did not make ourselves by Morgan Leigh is a realistically horrible look at what Steve Rogers might actually face upon tracking down the amnesiac Winter Soldier in person. And for a semi-serious, semi-joking chaser to all that misery, try the fanvid We Go Hard, by voordeel: