Who: Paul and Renee of Fangs for the Fantasy, a blog dedicated to reviews and commentary on Urban Fantasy and more, from a social justice lens.

Please give a warm welcome to Renee and Paul, everybody!

Last year we addressed that most terrible of scourges, the Fanpoodle.

Not satisfied with provoking this terrible beast, we are now risking the ire of another horrifying denizen of book fandom: Sunshine Suzie. 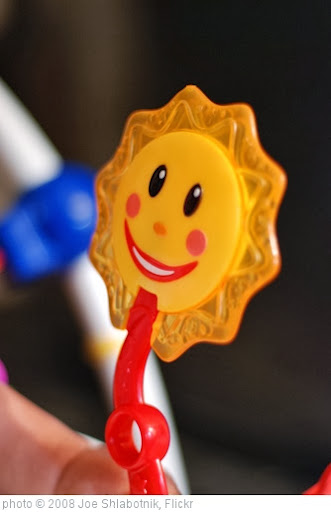 Sunshine Suzie is a reviewer and she lives a wonderful wonderful life. She lives in a world of perpetual happiness and glee, sunshine and rainbows and stars and happy fluffy bunnies. Sunshine Suzie is a woman we should all aspire to be, because unhappiness is alien to her, dissatisfaction an unknown concept; quite literally everything in Suzie’s world is wonderful.

Sunshine Suzie probably has access to some truly amazing drugs.

She brings that wonderful, sunny personality to the books she reviews, reading book after book and declaring each one more stupendously awesome than the last! With such a bright, happy personality, you’d think everyone would love her!

Except… not so much. Oh she has her fans who adore her, but some terrible, misguided souls are not happy with her joyous, sparkly glee at everything around her.

To understand why, we have to look at her twin sister, the failed restaurant critic Rainbow Rebecca (who also indulged in Suzie’s very very good drugs).

As a restaurant critic all the chefs loved her! She went into the best Michelin starred restaurants, ate their finest gourmet food and told in the gushiest, most superlative terms how amazing it was! 5 stars! Amazing! Food fit for the gods!

Then she went to the local McDonalds and said the same thing – those Big Macs were manna from heaven to her. 5 stars to the Big Mac! Endless praise for the McNugget! Truly there has never been a gourmet experience to match the McRib!

That cafe that was closed down for health code violations? Pish-posh, rat droppings add amazing piquancy to her meal and the e-coli gave her so much time to get acquainted with her bathroom! 5 STARS for this amazing culinary experience!!!!

Once, when she was down on her luck she went dumpster diving. That wheelie bin still wears those 5 stars with pride! It was the best half-rotten, rat-infested rancid garbage she had ever eaten!

Of course, occasionally, just maybe, Rainbow Rebecca did eat a meal that wasn’t QUITE perfect (that projectile vomiting was a very… involved experience) but she could hardly say anything negative! That would be rude! And meaaaaan! How could you suggest such a thing?! That’s someone’s creativity you’re attacking!

To everyone’s shock, several prospective diners who relied on Rebecca’s words were quite annoyed with her, them having failed to embrace her joyous (and high) view of the world and only the truly clueless (or masochistic) would ever rely on her advice on where to eat. She quickly found herself dropped as a food critic (though we can comfort ourselves that she’s probably blissfully happy about that).

And so we turn back to Sunshine Suzie in the book world, scattering stars around like she’s creating her own galaxy and without a cross word to say about anything. No, not even about Robert Kirkman’s blatant retelling of the same story (sell the same book twice, ka-ching!), or Charlaine’ Harris’s… performance art posing as a book, not for Laurell K Hamilton’s Beauty (a sex scene posing as a boo- well, pamphlet) – it doesn’t matter how offensive, badly written or terrible atrocity committed against trees a book is, Sunshine Suzie resolutely stamps 5 stars on everything before gushing merrily about the literary classic she has just discovered.

And just as Rainbow Rebecca was causing unsuspecting diners to eat monkey anuses garnished with salmonella, so too does Sunshine Suzie cause innocent readers to be assaulted by the literary equivalent (hi Victoria Foyt). But while Rainbow Rebecca is shunned from food criticism, Sunshine Suzie manages to flock with her fellows and even evangelises to other reviewers! She may even be multiplying.

Because negative reviews are mean! They’re cruel! The books are the author’s babies! Oh why won’t we think of the authors! (Why does no-one ever think of the reader’s poor poor minds and escalating brain bleach bill?)

But as reviewers who firmly reject Sunshine Suzie’s philosophy (just say no to drugs, kids!) we are thinking of the authors. We have read some truly stunningly awesome books that have lightened our lives and lifted our year – why would we blight these wonderful books by putting them on the same level as the literary monkey anuses? What about these author’s “babies”? Why would we put their precious darlings in the same playpen as some other author’s sore-ridden syphilitic shih tzu?

Just as Rainbow Rebecca isn’t doing those Michelin Starred restaurants any favours by putting them on the same level as the overflowing rotting dumpster, nor are good authors served by Sunshine Suzie who can’t possibly bring herself to give out less than 5 stars. (Frankly, unless we trust the reviewer, we completely ignore 5 star reviews, they’re meaningless).

Ultimately, if a reviewer constantly call crap golden, then how can you ever trust them to find real gold? If they’re going to keep calling monkey anuses prime rib, why would you want to eat where she recommends? Readers deserve better than salmonella and freeze dried rat, talented authors deserve better than to have their precious creations sharing shelf space with books that cannot even be recycled because the paper has been so tainted by their toxic content?

So for this Smugglivus, and the New Year, we want Sunshine Suzie to get off the drugs and to take a second look at the offal on her fork and put the stars away.

While we will go forward continuing to call crap crap in the most vehement of terms – so you know, when we say something is golden, you can take it to the bank. And in listening to us, you will never have to eat monkey anuses.

Cheers and thank you, folks!

Fangs for the FantasySmugglivusSmugglivus 2013
4 Comments
By Ana