Who: Merrie Haskell, author of some of the best middle grade fantasy novels out there which include The Princess Curse, The Handbook for Dragon Slayers and this year’s The Castle Behind Thorns. 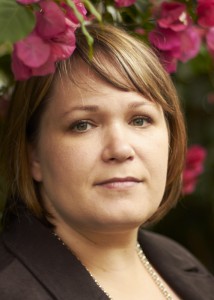 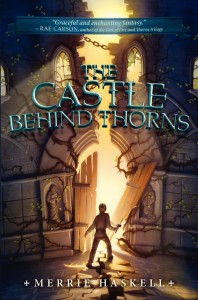 Please give it up for Merrie!

Happy Smugglivus, world! I’m so happy Ana and Thea asked me back to talk to you about my favorite reads of 2014! Oh dear, two exclamation points in a row? I promise, that won’t happen again.

I encountered some unusually structured books this year (is that vague enough a topic that I can fit all these books together?), and really liked them. 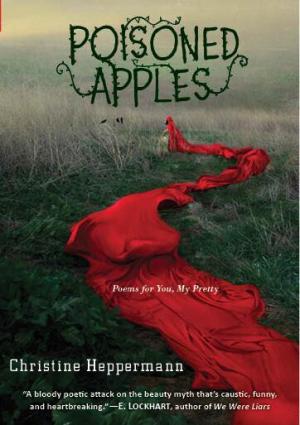 Poisoned Apples by Christine Hepperman wowed me straight out of the gate. A mutual librarian friend shelf-talked me the book so convincingly at ALA that I a) took an ARC (which I never do at ALA because I’m some kind of contrarian); b) and started reading it in the taxi back to my hotel. I finished it in the bathtub that night, flew home, immediately put the ARC in my stepdaughter’s hands, and pre-ordered a nice hardbound copy of my own. This book is, to paraphrase Angie Manfredi (the aforementioned librarian), the greatest synthesis of archetypes, fairy tales, and feminism you never knew you needed. As poetry. Thematically, the poems work so well together that the book feels like a novel, not a book of poetry. I loved it. I’m giving it to everyone for Christmas. 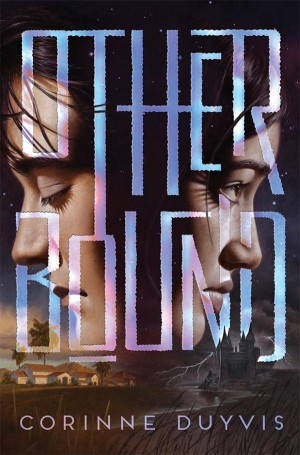 Otherbound by Corinne Duyvis is a fascinating YA take on second world fantasy with between-world body-jumping. There is a deep commentary on class, power, gender, and sexuality, plus an interesting exploration of disability and chronic illness. Corinne is from Amsterdam, and I think there’s something very Netherlandsish about the second world that I was unable to pinpoint until I learned the author’s hometown. It was refreshing to read second world fantasy from a non-American, non-UK author, and I highly recommend this one. The structural variation to this one is that much of the book is scene through two layers of narrator–one of the main characters leaps (like in a Quantum Leapish way, hence my use of that term) into the body of the other main character, and is a passive observer through her for many chapters. 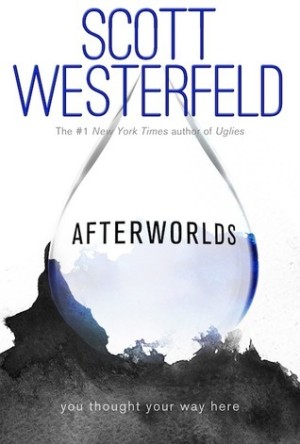 Afterworlds by Scott Westerfeld alternates between two different books–the book is about a NaNoWriMo winner who gets a book contract, an unusual but not impossible scenario–and the second book is the book written by the main character. It’s a bit of a mindgame to get into the second book, because suspending your disbelief about the world of a book while you watch the process of said book being edited and rewritten is a lot like watching the sausage get made. I promise, the book isn’t anywhere near as confusing as my last sentence. The book with in the book is enjoyable, and the framing narrative is likewise enjoyable (though I know some of my fellow mid-listers find it a bit improbable, but I didn’t have that difficulty); together, they elevate each other,and it’s a good read. 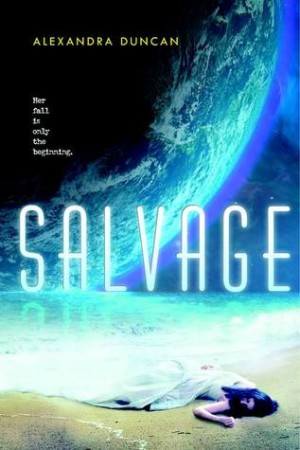 Salvage by Alexandra Duncan is YA that posits a fairly restrictive, religion-oriented society on spaceships, and what happens to a girl who flees that society to come to Earth. There are some great things about culture shock, choosing where where and how you want to live, and learning to fit into new societies, and I liked the view of a future Earth that was neither apocalyptic nor dystopian nor utopian. The world in the story is still dealing with the repercussions of our current lifestyles–people live on the great trash island in the Pacific, salvaging it for parts and recyclables, and Earthlings have been dealing with the rising sea, for example. 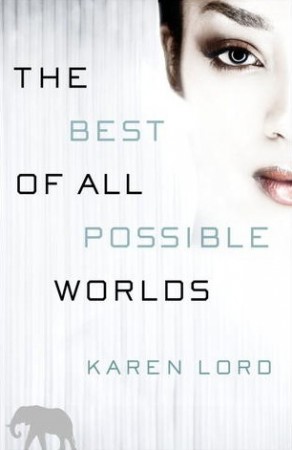 The Best of All Possible Worlds by Karen Lord is an adult SF novel that for me was like reading the second coming of Lois McMaster Bujold. I just loved it. Straight up love. The setting is a planet where all kinds of human variants have come to settle, including a faction of Sadiri, a group of all-male refugees from a poisoned planet. The Sadiri are pretty much Star Trek Vulcans, not gonna lie. And they are awesome. I am a total sucker for science fiction that is more about anthropology, sociology, and political science than about rockets and vectors. Throw in drastic gender imbalances so as to explore “Mars needs women” themes in romantic, consensual ways, and I’m there! 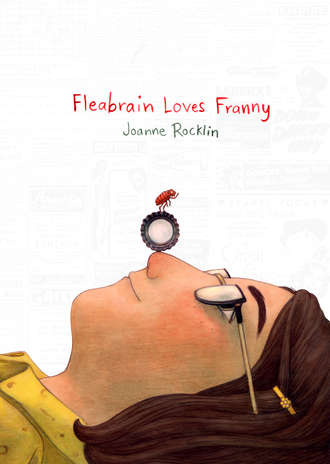 Fleabrain Loves Franny by Joanne Rocklin is the representative of the “less distant past.” It’s an homage to Charlotte’s Web, in which a flea receives above human intelligence and strength after resisting a flea powder attack; he befriends a young girl recovering from polio in the 1950s. The adventures Fleabrain and Franny share are fun, but the magic of the book is in the outcome of their friendship, which teaches Fleabrain the secrets of the universe. 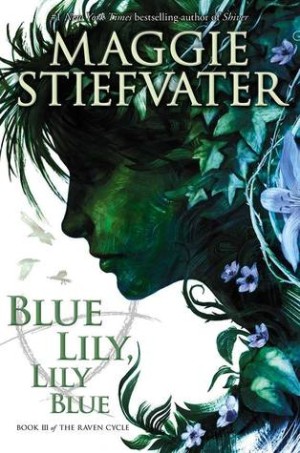 Blue Lily, Lily Blue by Maggie Stiefvater — OMG! Why aren’t you reading this series? Wait, I’m sure you are. You look smart. Anyway, as far as series about a non-psychic girl from a family of psychics who befriends a group of rude boys on a quest for a sleeping Welsh king goes, I’m pretty sure this is the best. Also, there’s an assassin love interest for the main character’s mom, and boys who have crushes on each other and a rotating queue of evil Latin teachers. Also trees that speak Latin. (Latin is very important here.) If none of that sounds good to you, then I can’t help you. This is book 3 of 4 and I cannot wait to see what happens next. 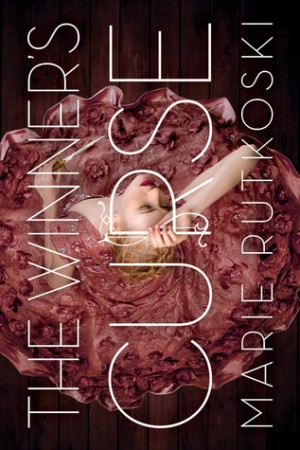 The Winner’s Curse by Marie Rutkoski is the first book in a trilogy set in an analogue Greece that has been invaded by an analogue Rome. I warn you that there is an enslaved (Greek analogue) population, which is not problematized in the ways you might anticipate; this book is about a civilization being stomped on by barbarians, and what happens when the barbarians become more civilized by the contact, and also what happens when the civilized start to fight like the barbarians. Kestrel, the main character, lives in a society that expects her to choose to fight in the army or to start producing children for the army, and those are the only two choices for her without rejecting her whole culture. Interestingly, Kestrel has strong strategic and tactical abilities, but no real aptitude for or interest in physical fighting, so while she is wanted by the army, and drawn to that aspect of being a soldier, there is a very real barrier to embracing that life. She is also an accomplished pianist, and music is considered an unnecessary “civilized” skill, valued more by the people she and her family oppress. The book is tense, fascinating, and I read it eagerly. 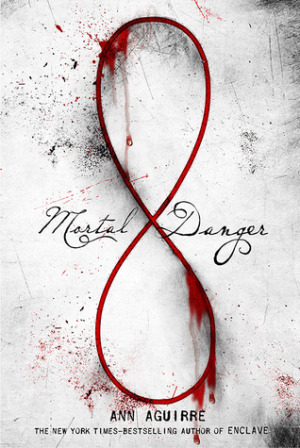 Mortal Danger by Ann Aguirre is another first book, this time in a series about what happens to people who are saved at the moment just before they commit suicide and offered three wishes in exchange for future “favors.” The three wishes format is enticing, and Aguirre went pretty much everywhere except where I expected with this book. It’s an intense book, and as you might suspect, a character driven to suicide is not magically made better by having three wishes granted. This story is about consequences, and I love stories about consequences.

Black Dog by Rachel Neuemeier, a novel take on werewolves that has sucked me in deeply. 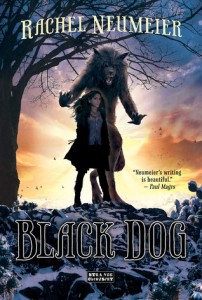 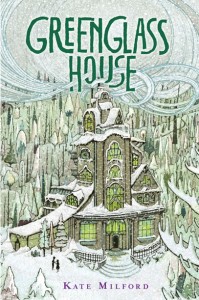 Chasing Power by Sarah Beth Durst: I’m right in the middle of this telekinesis quest book, and I have decided nothing at all is as it seems. Just a hunch!

Greenglass House by Kate Milford: I lost my copy one chapter in. I am SO MAD. A new copy is on its way! 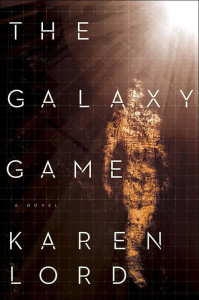 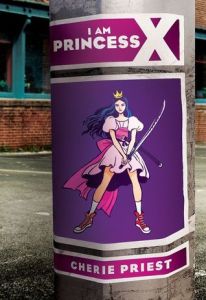 Besides needing the rest of the books from the “Parts of Series” section above to come to my hands today (The Winner’s Crime is out March 3!), I am really looking forward to Rae Carson’s newest series (The Goldscryer Saga, I believe?), Karen Lord’s The Galaxy Game, and Cherie Priest’s I am Princess X.