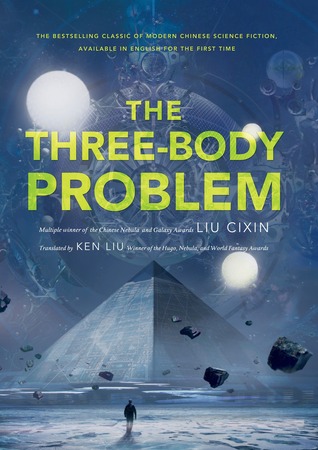 With the scope of Dune and the commercial action of Independence Day, Three-Body Problem is the first chance for English-speaking readers to experience this multiple-award-winning phenomenon from China’s most beloved science fiction author, Liu Cixin.

Set against the backdrop of China’s Cultural Revolution, a secret military project sends signals into space to establish contact with aliens. An alien civilization on the brink of destruction captures the signal and plans to invade Earth. Meanwhile, on Earth, different camps start forming, planning to either welcome the superior beings and help them take over a world seen as corrupt, or to fight against the invasion. The result is a science fiction masterpiece of enormous scope and vision.

Stand alone or series: First in the Three Body series

During China’s Cultural Revolution, young astrophysicist Ye Wenjie watches her father be executed in the name of progress in front of her very eyes. This singular event will shape not only the rest of her life but also the future of mankind.

A few years after that she is co-opted to participate on a top secret governmental project that ostensibly studies satellites. The truth is something else (and out there).

In the near future, nanoscientist Wang Miao is asked – by a multinational military-police task force – to infiltrate a seemingly innocuous scientists club. He starts playing a virtual reality game named Three Body and becomes increasingly obsessed with it. The game follows the rise and fall of a civilization – let’s call it Trisolaris – over and over again as its players try to solve an abstract problem that has befuddled scientists for centuries: how to predict how three objects will orbit each other in a repeating pattern? The potential solution to that problem is essential to save the Trisolarians and to win the game.

And then the countdown starts.

Written by Cixin Liu and translated into English by Ken Liu, The Three-Body Problem is – and you have to forgive me the cliché – a tour-de-force. The story goes back and forth in time, following two main characters and bridging all the aforementioned disparate plotlines into a cohesive whole that blew my mind away.

Because The Three-Body Problem is exciting as it is thought-provoking. As a science nerd as well as a puzzle enthusiast, I gobbled this book up like it was a box of Lindt chocolates. It is not immediately obvious what exactly is at stake here, the revelations happening with every twist and turn, as the story progresses and as the connection between the different elements become clear – or every time Wang entered Three Body and played a round. The evolution of this story is phenomenal, especially how it connects history, hard science and sociology in a readable, engaging way.

Then we have the basic premise of the novel which is based on two principles: one, that first contact between civilizations doesn’t need to happen in actuality for things to change; and two, that an encounter with an alien race will not end well because why would it? Those two are the foundation on which the author has written this tome.

With the cat out of the bag – yes, this is a novel about aliens, or rather, about first contact – the question becomes what Will Happen Next, as humans find themselves in separate sides of this pending war: some welcoming our new overlords, others wanting to fight to the very end. Even those factions are not as evenly split as that, within each of those there are One of the most impacting things about The Three-Body Problem is how the utterly personal, how one small independent action by one person can impact the lives of so many. Ye Wenjie’s decisions are completely and absolutely understandable as they are completely and absolutely unforgivable. And every single one of her actions can be traced back to that opening moment in the novel.

If Ye Wenjie is a fantastic character, the same cannot (unfortunately) be said about the remaining characters. Wang Miao for example never becomes more than “eyes” – through him we see everything that is happening but he is never fleshed out enough to become an entity on his own.

It is possible to argue though that the main character of the novel is not one single person. Rather, the main character is Earth – or, humanity as a collective. That’s who or what we are to root for (or against, depending on where you stand when it comes to appreciating how much our planet is worth). That’s another fabulous side of The Three-Body Problem as it’s almost a choose-your-own-adventure: you can choose sides and play this game any way you want.

With all that said, the book does have a few structural problems. There is a lot of info-dump but I was happy to give those a pass given their fascinating content. The exposition though, was quite clumsy. At one point a major character says, literally in the middle of a stand-off, “let me tell you what happened in the past” and proceeds to tell another character What Happened Then.

Finally, there is the question of the added translator’s notes at end of each chapter rather than as footnotes or at the end of the novel. This might sound incredibly nit-picking but the placement of those notes at the end of each chapter was intrusive as it broke the flow of the story as one has to stop and read them – with such a placement it became a matter of having to read them rather than choosing to read them because it felt like one would inevitably miss a piece of VIP information if not reading them there and then.

But those are minor criticisms because The Three-Body Problem is easily one of the best books I read this year. I enthusiastically recommend it. The sequel cannot come soon enough.

I confess that, initially, I was not particularly excited about The Three-Body Problem.

The book’s synopsis (and frankly, package) isn’t very grabbing, and although there were many glowing author blurbs attached to the title, the story sounded incredibly broad and hard to get excited about or truly fathom. But then trusted folks – mainly, dear Ana – told me to give it a try, that I would love it, etc.

The story is thus: During the frenzied height of the Cultural Revolution, a university student watches as her professor father is murdered by the zealous Red Guard. Booted from her own physics research, Ye Wenjie is sent to a remote countryside observation station where she eventually begins her work anew, under the careful watch of the government.

Many years later, in the near future, prominent physicists are killing themselves – all are tied to an organization called Frontiers of Science. A scientist named Wang Miao is asked to join the club in order to get to the root of the deaths, when he stumbles across a virtual game called Three Body… and weird shit starts to go down.

I don’t want to spoil the particulars of The Three-Body Problem, because there are many different revelations that coalesce and crescendo throughout the text – these are best discovered and realized on one’s own. (In fact, I kind of hate that the book description reveals that the strange world of Three Body is actually a representation of alien world Trisolaris, and the extremes it faces with its tri-solar environment. But that’s just me.) What you need to know is this:

The Three-Body Problem is a book that is, like its namesake virtual game, rich with nuance and detail. It’s a story about first contact between humanity and an intelligent, doomed alien species in the strangest possible way; but more than that, it’s a human story about the flawed people who make decisions that ripple outward and change the course of time and history. This is a science fiction novel, but it’s also a story about the changing narrative of history, really – at one point in the book a story is told about an adult who explains to a child that the pictured people are not heroes or villains; they are history. On a much larger, metatextual level, this analogy holds true for Ye Wenjie, Yang Dong, Wang Miao, Captain Shi Qiang, and the whole assorted cast of the novel. This is a visionary look at history and the narratives that people impose and write over space and time.

The Three-Body Problem is told told from a Chinese perspective, set during and after the Cultural Revolution. As Ana says, Ye Wenjie is forever changed – her heart frozen over – after watching her father’s death at the hands of the Red Guard. This is an integral part of her growth and decisions as a character. Beyond Ye Wenjie, however, The Three-Body Problem shows the profound impact that the Cultural Revolution had on scientific accomplishment and progress, on social, economic and interpersonal relationships from the smallest particle, to the grandest extrasolar levels. Again, the roots of this story lie in history – specifically Chinese history, but also on a grander scale of interaction and reaction of beings (and unstable bodies) that circle and coincide with each other.

The Three-Body Problem is a hard science fiction novel, rife with exposition. This has the potential to be very good, or very bad. You do not need to be a physicist to read or enjoy this book, but if you do not like science, math, puzzles, or lengthy discussion about such things, you might not be as fond of this book as Ana or I. As for me? I loved the lessons in transmission of energy and broadcasting signals, the chaos and possible stability of three suns, the potential applications of nanotechnology and interstellar possibilities. Oh, I should also say The Three-Body Problem is a weird book – from the first time you enter Three Body, read the chants of de-hy-drate and meet the various philosophers, scientists, and emperors who make their own cameos, you’ll see just how weird the book can be. But it’s a beautiful, enchanting, dreamlike weird. And I mean that in the best way – it’s been a while since I’ve been fully blown away by true originality in SFF (that sounds so jaded, but it’s true). The Three-Body Problem is wonderfully, memorably different. And I loved that.

The Three-Body Problem has some issues with clunkiness. I’m not sure if that is translation or syntax, or if it’s just a poor editorial choice to include footnotes throughout the text in the manner of an academic paper. I like that there are notes from excellent translator Ken Liu throughout the book; I am less enamored with the fact that these are represented as footnotes that interrupt the flow of reading. I agree that had these comments come in the form of end-of-chapter notes (see Losers in Space by John Barnes, for instance), the reading experience of The Three-Body Problem would have been improved.

That said…the book is so damn awesome, I really cannot find other fault.

For me, it’s a Top 10 book of the year – and I absolutely, wholeheartedly, enthusiastically recommend it to all.