This week, Ana tackles a YA novel, The Tricksters by Margaret Mahy. 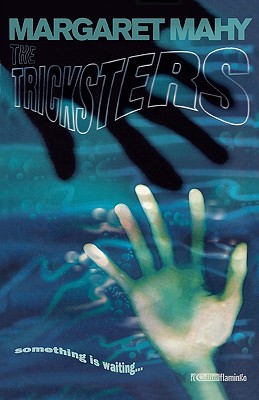 When three fascinating but sinister brothers mysteriously appear at her family’s beach house, Harry feels as if she summoned them herself. Are the Tricksters her own creation? Or are they aspects of Teddy Carnival, a boy who drowned there years before?

How did I get this book: Borrowed

Margaret Mahy’s The Changeover is a book that is constantly recommended and cited as influential in the YA circles I frequent. Now, to be completely honest, I read The Changeover, liked it, appreciate its merits as well as the love readers have for it, but I wasn’t completely awed by it. This is probably why it took me so long to read The Tricksters, another book by the same author, equally highly recommended by reviewers and readers I trust and one that had been sitting on my borrowed shelf for a while.

There is a house, Carnival’s Hide that once belonged to the Carnivals, a family hit by tragedy when Teddy Carnival drowned many years ago. A house that now belongs to another family, the Hamiltons, who are about to congregate there for their Christmas holidays. The play – because there is this feeling of a theatrical melodrama running throughout the story – opens as the family (and their guests) arrive at the house. The actors are in all place: the parents, the older adult siblings, the middle daughter Harry who inhabits that threshold of girl-woman, the kids, the house guests, the cat and…the unannounced visitors, the three Carnival brothers who have come to cause havoc. The latter appear one day out of thin air in front of Harry who is the only one who knows something afoot is happening with the three brothers and is immediately guarded against them.

So that’s the immediate set-up and now that I have read it, I can say: Oh. OH. NOW I SEE IT.

I see: a ghost story. But also: a murder mystery. A family drama. A coming of age. A psychological thriller. A love story. A story about a young girl becoming self-aware and empowered and understanding the limits and consequences of that self-awareness and power.

I see: those different threads, beautifully woven into a smooth narrative that shows as much as it hides. The skilled development of a story that unfolds gradually and is at turns light and funny but also very unsettling, unnerving in the way that it provokes, questions and challenges perceived narratives about gender, sexual fantasy, power differential, dysfunctional yet loving families and the possible downfalls of something as benign as the feeling of hope.

I see: a protagonist named Harry. Short for Ariadne, whose relationship with that very name – and the hesitation her family has in even using it – is a powerful narrative on its own. A budding novelist who likes romance and especially the type of romance that experiments with fantasies of control, a running theme in The Tricksters and one that is incredibly well explored and examined in-narrative. A girl who is astute and observant, who knows herself to be “in-the-middle” and who understands, and even perhaps accepts, what comes with it: the bullying from her older sister, the emotional negligence from her parents; who, by the same token, has her blind spots with regards to her other, younger sister. The complex, complicated dynamics between the family members, especially the one between sisters, is perhaps one of my favourite things about the story right up there with Harry’s arc.

I see: the invisible web that connects this book to those of Diana Wynne Jones, Hilary McKay, Sarah McCarry, E.Lockhart and other Young Adult and Middle Grade luminaries. If you like this book, try those authors. If you already have read those authors as well as this book, you probably are on the right track already so please what else could I read that it’s this good?

Though she did not look forward to meeting Felix the following day, she did not feel it would be an impossible encounter for she had total right on her side. But then, after putting her light out and trying uselessly to sleep, she put it on again and reread her description of Belen and Jessica falling on to the apple blossom. Only when she had crossed these words out, burdened as they were now with a horrid fatality, did she feel set free, not only from a faulty story, but from a troubling idea that need no longer trouble her again – the idea that it might be exciting to have choice taken away from her.

Reading Next: Stray by Elissa Sussman

Joint Review: A Spear of Summer Grass by Deanna Raybourn