Welcome to BEA Appreciation Week 2011! As is our annual tradition, this week we bring you reviews of some of the titles we have scooped up at BEA, as well as some general news and ponderings concerning the trade show and affiliated conferences. 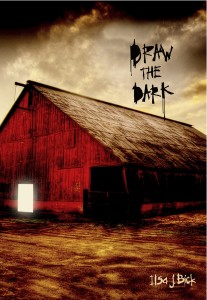 There are things in Winter, Wisconsin, folks just don’t talk about. The murder way back in ’45 is one. The near-suicide of a first-grade teacher is another. And then there is 17-year old Christian Cage. Christian’s parents disappeared when he was a little boy, and ever since he’s drawn and painted obsessively, trying desperately to remember his mother. The problem is Christian doesn’t just draw his own memories. He can draw the thoughts of those around him. Confronted with fears and nightmares they’d rather avoid, people have a bad habit of dying. So it’s no surprise that Christian isn’t exactly popular. What no one expects is for Christian to meet Winter’s last surviving Jew and uncover one more thing best forgotten–the day the Nazis came to town. Based on a little-known fact of the United States’ involvement in World War II, Draw the Dark is a dark fantasy about reclaiming the forgotten past and the redeeming power of love.

Stand alone or series: Stand alone novel (although the ending suggests there could be more books?)

How did I get this book: Review Copy from BEA

Why did I read this book: I’ve had my eye on Draw the Dark for over a year – not only is that cover badass (case in point: the boyfriend, who is not a reader, saw this book lying around and was compelled to pick it up and maybe even will try to read it, just because of the awesome cover), but the premise sounds wonderfully creepy to boot. I was thrilled to meet Ms. Bick at BEA and finally nab a copy of this book (along with her upcoming post-apocalyptic YA title out this fall).

In a small town like Winter, Wisconsin, being different is not a good thing. And Christian Cage, a dreamer, artist, and perpetual outsider since he was a small boy, is very different. Singled out by his elementary school teacher in her suicide note, whispered to be the cause of his parents’ disappearance and his aunt’s death, Christian tries to keep his head down and his nightmares to himself. He has a singular talent, you see – because the things that he draws are powerful. Try as he might to stop himself and contain his art, the things Christian draws tend to die. When he wakes up one morning with no recollection of vandalizing a neighbor’s barn with swastikas and a menacing portrait, Christian’s status as local anathema is cemented even further, and he is sentenced to community service and therapy sessions. But what terrifies Christian most of all is how his paintings are now leading him into memories of an impossible past, filled with lust, hate, and murder. You see, something bad happened in the town of Winter fifty years ago. And Christian, with his art, is the only person who can discover the truth before it is too late, because history in Winter has a tendency to repeat itself.

The first novel I’ve had the pleasure of reading by Ilsa J. Bick, Draw the Dark is a wonderful dark fable in a small rural town with a dark past. When I picked up this book, I was expecting a straight supernatural horror novel – something along the lines of that 1980s horror movie Cellar Dweller – but instead got a creepy, resonating mystery novel, more along the lines of The Lady in White or even The Watcher in the Woods (sans aliens). Tinged with the supernatural and steeped in the little known history of German Prisoners of War (referred to in the United States as “PWs” as opposed to the more glaring “POWs”) on American soil during World War II, Draw the Dark blends elements of historical mystery, dark fantasy, and – yes – some good old fashioned cheesy horror. Despite the fact that Draw the Dark stretches plausibility to crazy extremes (and I can easily see why this isn’t going to be a book that works for everyone), I found myself loving this story and on my toes with the core mystery at the heart of the novel. Replete with sex, anger, and revenge, walled-in corpses, blood, and violence, the truths that Christian discovers through his drawings and ESP-like experiences are enough to sate the hungriest imaginations. There’s also a tradition of anti-Semitism, the mysterious disappearance of Jews from Winter, and the sinister, deeply unsettling feeling that comes from “belonging” in a small, homogeneous town.

While the elements in the past are fantastically illustrated, Draw the Dark is truly Christian’s story, as he struggles with his abilities, sanity, and status as the resident freak of Winter. It is through Christian’s observations and narration that he discovers the truth of the past and comes to terms with his own abilities, and I loved the voice of the novel. Ms. Bick does a wonderful job of tying these elements together, alternating the past with the present and leading to a dramatic finale – I can honestly say that there were certain things that completely took me by surprise, and that is awesome (because it really sucks when you can easily predict the course of a mystery).

Praises said, there were also a few significant things that didn’t really work. Draw the Dark is an ambitious book, as it deals not only with a historical mystery, a contemporary misfit/coming of age story, and supernatural artistic and extra-sensory abilities. It also attempts to tell the story of a “sideways place” – some netherrealm – that Christian can access and use as power, as well as the location of his missing mother. Draw the Dark is bookended with mentions of this strange sideways place, and Christian’s fear of passing through the door that will help him find his mother. While I loved the extent of Christian’s abilities and was intrigued by the disappearance of his mother, it didn’t work in the context of the story. As I’ve said before, the heart of Draw the Dark is with Christian and his exploration of the past and his present, trying to keep the same story from repeating itself – and as cool as the sideways place sounds, these chapters were disjointed and sit strangely with the overall story. As fodder for separate books, I can see the sideways place and Christian’s search for his family being truly awesome. But all jumbled together in this single volume, it didn’t work. Also, there is an undeniable level of hokiness with Christian’s relationship to his psychiatrist, as the doctor almost immediately trusts Christian and conveniently buys into his…abilities. That said, horror films and books tend to share this degree of silliness when science is used to explain the unscientific – that’s all part of the genre appeal, right? (For instance, I recently watched Insidious, and the whole astral projection discussion was fantastically cheesy, but so much fun.) While this convenience is bound to bother some and is worth mentioning, I was fine with the genre cheese.

Overall, I found Draw the Dark to be a solid, entertaining book, and I am extremely excited to read more from Ilsa Bick.

“What?” Confused, Sarah shot a look at me and then turned to stare in the direction of the bike rack. “Oh,” she said, only it came out more like a moan.

Dekker was there, standing next to a red motorcycle – probably his dad’s. When he saw that we’d spotted them, he elbowed his two guys – Curly? Larry? I didn’t think they were the same two sandrats, so probably Athos and Porthos, but who knew. Their heads turned our way at the same time, and it was weird, like a pack of animals watching prey.

Without realizing what I was doing, I stepped in front of Sarah. “What do you want?”

“Now, is that any way to talk to someone who could press charges and get your ass off probation and into jail?” Dekker gave a silent dog’s laugh, and then his eyes shifted. “Hey there, Sarah.”

Sarah was silent. I felt her sidle up to my right elbow.

Dekker pulled a face. “What, you don’t want to talk to me?”

Reading Next: The Lost Heiress by Catherine Fisher