This month’s OSW Readalong pick is Hangsaman by Shirley Jackson

We’re treating this review as a straight-up, simple review with Ana’s and Thea’s takes (instead of the usual discussion questions). We’ll give our opinions regarding the book, then we’ll ask YOU to join in. 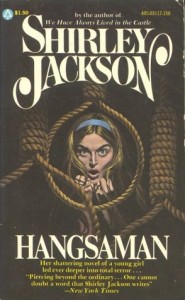 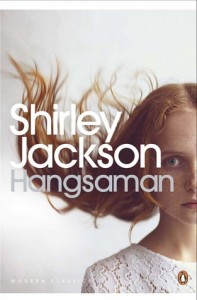 Natalie Waite, daughter of a mediocre writer and a neurotic housewife, is increasingly unsure of her place in the world. In the midst of adolescence she senses a creeping darkness in her life, which will spread among nightmarish parties, poisonous college cliques and the manipulations of the intellectual men who surround her, as her identity gradually crumbles.

Inspired by the unsolved disappearance of a female college student near Shirley Jackson’s home, Hangsaman is a story of lurking disquiet and haunting disorientation.

My immediate reaction to Hangsaman was: it’s a good thing we are having this as a readalong so I can toss around my ideas concerning what the hell this was all about. The second thought I had was: I feel like a need a degree (and 10 years of experience, minimum) in psychology to be able to even start unpacking this novel.
My jumbled thoughts collected below:

-This is a very dark, discomfiting book. In many ways it’s in-keeping with Shirley Jackson’s oeuvre in the way that it questions and challenges societal norms. It reads to me as a very… 50s novel (obviously because it is a book published in the 50s), portraying the neurosis of the middle class American family, the douchebagery of certain types of self-centred men and the limitations imposed on women’s lives.

-It’s interesting to me that even though a lot of Shirley Jackson’s books have a straightforward element of horror (murder, ghosts, lottery assassinations), in this novel, that element is much more psychological. It’s no less real though. I’d in fact argue that – out of the novels I read by the author – it is the realest one yet. It deals with friendships, with growing up, with the sense of identity one can forge.

-The story itself revolves around a young teenage girl named Natalie Waite who is in the throes of adulthood, about to shed her childhood and to grow up to become herself. The question of identity is one that runs through the novel – from the start as the character asks herself who is she, what is her name, what does it mean to be Natalie Waite. It’s a very pointed if not exactly straightforward arc that deals with acute loneliness, the sense of not-belonging and post-traumatic stress disorder.

-The latter point for me is essential. Even though the novel never directly tells us that and the character doggedly refuses to talk about it, it is very clear to me that Natalie is sexually assaulted (perhaps even raped) in the first part of the novel during one of her family’s Sunday parties, by a friend of the family. It is a scary, horrifying moment that is followed-up by her family’s refusal to acknowledge what happened to her (she goes down to breakfast the day after with a bruised face and no one says anything about it). Here is where things become fuzzy to me: are the second and third parts of the novel and Natalie increasing psychological dissociation a direct result of what happened to her?

-I think so: and I think Tony is that dark stain, the thing that was created in order for Natalie to cope and the thing that had to be beaten and left behind so that she could become Natalie-the-adult. I don’t know how I feel about the implications of that.

-It has crossed my mind that Natalie’s relationship with her father is abusive. It’s emotionally and mentally abusive – and I often wondered if there wasn’t a sexually charged underline there (that letter exchange in which he calls her a princess and she asks him if he wasn’t the Knight who lustily had visited her the night before? CREEPY). I also thought that her father could be complicit with what happened to Natalie at that party. Her fascination with the Langdons is very telling too as in many ways I can see Arthur and Elizabeth as a younger version of Natalie’s parents.

-The last paragraph was very powerful.

Like Ana, I’m not sure I’m particularly qualified to make sense of this novel.

Hangsaman is, for lack of a better word, weird.

It’s a dark, psychological thriller about a girl who, at the most basic level, grows up. For seventeen years of her life, Natalie has been the obedient, formless daughter under the careful tutelage of her literary and learned father and torn by the melodrama of her flighty, trapped mother. Only recently has Natalie realized that she actually doesn’t know who she is. Or what she wants. Or how to go about becoming a fully formed person, outside of the constructs already established for her.

At college, Natalie’s sense of self changes; her narrative becomes more fraught as she becomes enmeshed in her new life. And then there are other developments. Murder. Characters who may or may not exist. It’s hard to separate what is truth from what is projected or internalized fiction – but it is an intensely disturbing, quietly isolated explication of a girl who is alone with her thoughts.

I don’t know if I agree with Ana, that parts 2 and 3 are a defense mechanism created by Natalie in response to the act in part 1. (Although I do think that is a fascinating and insightful reading of the novel!) I am not entirely sure what it is that I have actually read in Hangsaman, except that it reminds me intensely of Sylvia Plath’s The Bell Jar in its malaise and shock and coming of age and female characterization in juxtaposition to the men within. It reminds me of Shirley Jackson’s other work, as Ana quite rightly says it fits in beautifully with her oeuvre of psychological thriller. It questions relationships and friendships and the familial unit.

All I know for certain is that I’m left thinking about Hangsaman, provoking, questioning, reflecting on its characters and its peculiar ways of framing questions and narratives – there are letters and diary entries and even timelines that don’t quite make sense, but fit beautifully together.

I’m not sure I understand the book. But I enjoyed reading it.

Thea: 7 – Very Good; although I really have no idea how to rate this novel.