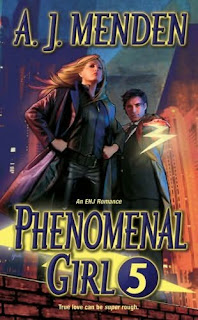 Genre: Part of the Shomi line by Dorchester Publishing – it is basically, paranormal romance.

Summary:Lainey Livingston has just been made a member of the Elite Hands of Justice, the world’s premiere cadre of superheroes. Her work with the Red Knights and the Power Squad was impressive; her apprehension stats are above normal, and her great strength and ability to fly are equally remarkable. But no one gets a free pass to active duty, and Lainey’s next test is going to be her hardest. She’s to train with the Reincarnist.

Robert Elliot, the Reincarnist. A magician who has lived multiple lifetimes, he’s the smartest man in the world—and Lainey’s last obstacle. He was personally responsible for seeing Pushstar wash out. But his eyes are the softest, kindest that Lainey has ever seen, and he’s just the sort to knock her for a loop. Lesson #1: Romantic entanglements among crime fighters are super exploitable, and falling in love with a man who “can’t die” is like waving a red flag at a bull. Especially not when the most fiendish plot ever is about to break over Megalopolis like a wave of fire.

Why Did I Read the Book: I saw the shout out for the book over at The Book Binge when they were doing their Shomi Spotlight. I checked the author’s website and thought her “voice” was quite cool and I got even more psyched to read it. I mean, it’s Superheroes! with Romance! It sounded like a book Made For Ana. I then got an ARC and proceeded to read it.

* Torn between being snarky or not, Ana seeks a way of writing this review without being mean and settles for…*

Phenomenal Girl 5 in a nutshell:

In Megolopolis, Lainey Livingston … AKA Phenomenal Girl 5, is a superheroine that has been trying to join the Elite Hands of Justice AKA EHJ, forever. The EHJ is the main superhero squad that fights the universe’s (yes the universe) most powerful super-villains. They even have a Saturday morning cartoon show. Lainey’s superpowers are: she can fly and she is super strong. She is accepted in and is to be trained by Robert Elliot, AKA The Reincarnist, a superhero who poses as a playboy and lives in a mansion with a training facility. His power is that when he dies, he immediately reincarnates as a 20 year old man in a different body and with different traits but capable of keeping his memories except that is, for the memory of the people he loves. On top of being able to reincarnate when he dies, (aka lamest superpower EVER) he is also one of the most intelligent men on the planet and most rookies are to be trained by him. Also he is a level 10 (highest level) magician. (In Italian because that’s how he learnt it. And everyone has a little bit of magic in them.) Lainey becomes Robert’s new partner but he is very cynical and jaded and thinks superheroes have become celebrities so he is like a loner. He has a keen sense of justice and is adamant that all villains must be brought to justice. They fall in love, they both die. They both are brought back. Robert becomes Wesley and forgets about Lainey. They fall in love again. The super-villain of the jour is about to start the apocalypse and they must stop it. They do it. The end.

Now, if you read the above and thought – “oh, wow, cool, this book sounds good and original” – by all means, stop reading this review right now and pick it up. But if like me, you are a geek that has read more that your fair share of comic books and graphic novels, watched more than a few superheroes movies then you will probably be thinking to yourself: boy, does that sound familiar.

It is like a mish mash of everything I hold dear: Lainey’s superpowers sound like Rogue’s from the X-men, The Reincarnist lifestyle sounds eerily like Bruce Wayne’s and the EHJ is like a spin off of the JLA. There is even a vigilante hero that sounds so much like Rorschach from the Watchmen it was not even funny. So, it is not the most original premise in the world but all things considered, this could have easily been seen as a cool homage. That wouldn’t be a problem if it weren’t for the other issues I had with the book. Like for example the Predictability factor.

The moment I read that Robert was able to die and reincarnate and every time it happened he would come back without the memory of the people he loved, I just knew this was exactly what would happen. And Bingo! I was spot on. Again, if this had been well done, it could have added a lot of angst but because it all happened so fast , it was like a roller coaster to catastrophe right in front of my eyes. It was not two seconds after their first kiss, that they had to fight a villain that ends up killing Lainey and Robert uses all his magic to bring her back, and therefore dying himself because he loved her too much even though there was not a single clue of this undying love before that moment. Some last minute love declarations, a sex scene before he dies, then he leaves the room and comes back as a 20 year old man called Wesley. Now, Lainey who at this point has found out that she loves Robert more than anything in the world and should be desperate and lonely and scared that the man she loved disappeared forever to be replaced by some dude, has the following reaction when he walks into the room: “wow, he’s hot” . Then, she gets depressed and it’s so sad but less than one month later she finds that she is in love with this Wesley and Wesley is in love with her and he says that he has never loved anyone like this before but HOW DOES HE KNOW THAT, I ask, since he supposedly has no memory of his former lovers? (and they were plenty, since he has been around since Roman times, apparently).

But this is not all. When Lainey dies, she sees her mother and her mother has a message for her…from God. Also, the Bermuda Triangle? A Gateway to Hell. And one of the superheroes of the EHJ is a reincarnation of Aphrodite the Greek goddess of Love. And the apocalypse is to be brought about by the villain who according to a prophecy says that an innocent (one chance to guess who the innocent is) will be joined by a dark soul and their baby could be either an evil envoy or the world savior. So yes, there is also a baby. It all of this happens in less than two months. Add to the concoction the EHJ’s inner politics and search for celebrity status (best part of the book in my opinion – very innovative). It is like, PG5 was written by a very green author who tried to do too much in too little time and in less than 300 pages.

On top of that there is also the fact that all of The Reincarnist’s magic spells are said in Italian. It just so happens I not only speak a little Italian, my best friend is Italian and my day time job, coincidentally, involve translations (no, I do not smuggle books for a living, unfortunately) and I can safely say that most of the Italian used in the book is wrong. One spell for example says “libro di aumento” which means NOTHING. To be fair, I read an ARC and it may just be that the final copies have been edited to correct these but it did contribute to mar my enjoyment of the book.

And the worst thing is, I can’t even say, “at least the sex was hot” because all the sex was behind closed doors.

So here I stand dear readers, *hands on waist, puffed chest and staring into horizon* dully doing my duty and reporting my findings on PG5. I wish I had loved this book – the concept of superheroes and romance brought together is one that ticks all the right boxes with this reader. Lainey as a heroine had a lot of potential and some of her inner thoughts were very funny. Plus, I read A. J. Menden’s cool livejournal and I really like her online “voice” so it is with a heavy heart and a very sad feeling that I say, alas, Phenomenal Girl 5 was a complete waste of my time.

Verdict: The premise had potential but sadly it did not live up to my expectations.

Rating: 2 – complete waste of my time.

Reading next: Crocodile on the Sandbank by Elizabeth Peters