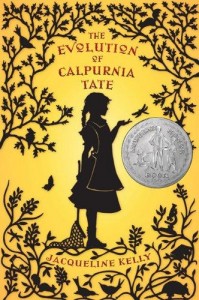 Title: The Evolution of Calpurnia Tate

The summer of 1899 is hot in Calpurnia Virginia Tate’s sleepy Texas town, and there aren’t a lot of good ways to stay cool. Her mother has a new wind machine from town, but Callie might just have to resort to stealthily cutting off her hair, one sneaky inch at a time. She also spends a lot time at the river with her notoriously cantankerous grandfather, an avid naturalist. It turns out that every drop of river water is teeming with life – all you have to do is look through a microscope!

As Callie explores the natural world around her, she develops a close relationship with her grandfather, navigates the dangers of living with six brothers, and comes up against just what it means to be a girl at the turn of the century. [1. One minor quibble with the blurb and the book: 1899 is not the turn of the century because a new century does not start on “00”, it starts on “01”. Just saying]

Why did I read this book: I have been working my way through Newbery medal winners and honors.

It’s the Summer of 1899 in a small town in Texas and the heat is almost unbearable. Instead of napping in the afternoon like her 6 brothers and mother, almost-twelve-year-old Calpurnia Virginia Tate (or Callie Vee to friends and family) prefers to refresh herself by swimming in the local river. There she likes to spend her time observing nature and making notes in her trusty Notebook for Callie is a keen naturalist. One day she notices these huge yellow grasshoppers that seem to have appeared all of a sudden and her inquiring mind wants to know how and why. It sounds like a simple thing: Callie looks at the world around her and has a question that has a very definite answer; but the process of acquiring the answer to this (and other questions) is a difficult yet ultimately rewarding one for Callie Vee.

Difficult because Callie is a young girl at the end of the 19th century and the obstacles to her ambition are almost insurmountable: the librarian of her local library refuses to let her borrow Darwin’s Origin of Species because it is not a book for a good Christian Girl; at school she has lessons on Reading, Spelling, Arithmetic, Penmanship, Deportment (in which she gets an “acceptable” for Posture but an “unsatisfactory” for Use of Hankie and Thimble, which makes her mother really unhappy) but no Science; her mother wants her to spend her free time learning to play the piano, sewing and learning how to cook in order to be a proper lady so that she can take her of a house, husband and children.

Thank God for Callie’s Granddaddy then. A war veteran and a retired business man he is also a keen naturalist. Up until this summer Callie has always avoided the aloof, weird granddaddy who spent most of his time in his lab or by the river, but when they learn about their shared interest, the duo start to spend more and more time together. Granddaddy nurtures Callie’s interest in nature and the Scientific Method as much as he can and Callie gobbles it all up with enthusiasm and passion until the reality of her situation comes knocking at her door – what will happen to Callie Vee’s ambitions then?

The Evolution of Calpurnia Tate is such a lovely book and I am not surprised that it is a Newbery Honor book.

Plot-wise it moves slowly (almost in accordance with the lazy summer afternoons that the characters are experiencing) and with several different episodes in Callie’s life that year: from her budding relationship with her grandfather, to her piano lessons; from her relationship with her 6 brothers, her mother and best friend to observing how they differ depending on the circumstances; to her sewing and cooking lessons and what she gets from it to her several scientific experiments and what she gets from that. There are also several funny sequences especially those with her younger brothers all falling in love with her best friend Sarah or the first time they drink the new bubbly drink Coca-Cola and sequences about new technological wonders that are just appearing like cars.

With regards to the characters, there is of course, a certain familiarity when it comes to Callie and how spirited, precocious and spunky she is. But the author succeeds in making her unique, believable and relatable. Starting with her voice which is funny and smart without being obnoxious, for example in this passage in which she is having a hard time sewing:

She is also incredibly flawed and makes horrible mistakes. How for example, she is aware of being her oldest brother’s favourite sibling and how possessive she is about him to the point that when he falls in love she tries to come between him and his potential fiancée. Learning from that and trying to atone is something that comes into play throughout the novel.

The relationships are also incredibly well done and I really loved to read not only about her growing attachment to her Grandfather (I teared up quite a few times there as on a personal level, it reminded me of my relationship with my own grandfather) but about her brothers (especially younger Travis and older Harry) and the difficult one with her mother.

But I think what I loved the most about Callie is how unapologetic ambitious she is, how she thinks about her future and how she realises that her ambition might even be hurting others (like her mother) but that doesn’t stop her from wanting what she wants. One of the most poignant moments in the novel is when Callie realises that her mother might look at her as an ally in the middle of so many brothers and that she probably hoped that she would be able to share things with Callie and how disappointed her mother must be in her. This realisation, even as hurtful as it is, does not prevent Callie from carrying on and even though the book has an open ending I am left with the certainty that Callie will not martyr herself up and will succeed in whichever path she sets her mind to.

“Where did the yellow grasshoppers come from” is basically the start of a long journey that goes beyond the pages of this book and its ending.

And I will leave with this last favourite quote:

How come I have to learn how to sew and cook? Why? Can you tell me that? Can you?”
“What kind of question is that?”
My lord, what a dismal response. Was the answer such an ingrained, obvious part of the way we lived that no one stopped to ponder the question itself? If no one around me even understood the question, then it couldn’t be answered. And if it couldn’t be answered, I was doomed to the distaff life of only womanly things. I was depressed right in the ground.

I so loved Callie Vee.

Chapter 1 – The Origin of Species

When a young naturalist commences the study of a group of organisms quite unknown to him, he is at first much perplexed to determine what differences to consider . . . for he knows nothing of the amount and kind of variation to which the group is subject. . . .

By 1899, we had learned to tame the darkness but not the Texas heat. We arose in the dark, hours before sunrise, when there was barely a smudge of indigo along the eastern sky and the rest of the horizon was still pure pitch. We lit our kerosene lamps and carried them before us in the dark like our own tiny wavering suns. There was a full day’s work to be done before noon, when the deadly heat drove everyone back into our big shuttered house and we lay down in the dim high-ceilinged rooms like sweating victims. Mother’s usual summer remedy of sprinkling the sheets with refreshing cologne lasted only a minute. At three o’clock in the afternoon, when it was time to get up again, the temperature was still killing.

The heat was a misery for all of us in Fentress, but it was the women who suffered the most in their corsets and petticoats. (I was still a few years too young for this uniquely feminine form of torture.) They loosened their stays and sighed the hours away and cursed the heat and their husbands, too, for dragging them to Caldwell County to plant cotton and acres of pecan trees. Mother temporarily gave up her hairpieces, a crimped false fringe and a rolled horsehair rat, platforms on which she daily constructed an elaborate mountain of her own hair. On those days when we had no company, she even took to sticking her head under the kitchen pump and letting Viola, our quadroon cook, pump away until she was soaked through. We were forbidden by sharp orders to laugh at this astounding entertainment. As Mother gradually surrendered her dignity to the heat, we discovered (as did Father) that it was best to keep out of her way.

My name is Calpurnia Virginia Tate, but back then everybody called me Callie Vee. That summer, I was eleven years old and the only girl out of seven children. Can you imagine a worse situation? I was spliced midway between three older brothers—Harry, Sam Houston, and Lamar—and three younger brothers—Travis, Sul Ross, and the baby, Jim Bowie, whom we called J.B. The little boys actually managed to sleep at midday, sometimes even piled atop one another like damp, steaming puppies. The men who came in from the fields and my father, back from his office at the cotton gin, slept too, first dousing themselves with tin buckets of tepid well water on the sleeping porch before falling down on their rope beds as if poleaxed.

Yes, the heat was a misery, but it also brought me my freedom. While the rest of the family tossed and dozed, I secretly made my way to the San Marcos River bank and enjoyed a daily interlude of no school, no pestiferous brothers, and no Mother. I didn’t have permission to do this, exactly, but no one said I couldn’t. I got away with it because I had my own room at the far end of the hall, whereas my brothers all had to share, and they would have tattled in a red-hot second. As far as I could tell, this was the sole decent thing about being the only girl.

Rating: 8 – Excellent and leaning towards 9

Reading Next: The City in the Lake by Rachel Neumeier