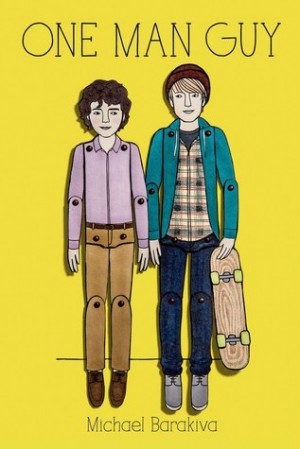 Funny and heartfelt, One Man Guy serves up the raucous family humor and gentle romance of My Big Fat Greek Wedding, as told with David Sedaris–style wit

Alek Khederian should have guessed something was wrong when his parents took him to a restaurant. Everyone knows that Armenians never eat out. Between bouts of interrogating the waitress and criticizing the menu, Alek’s parents announce that he’ll be attending summer school in order to bring up his grades. Alek is sure this experience will be the perfect hellish end to his hellish freshman year of high school. He never could’ve predicted that he’d meet someone like Ethan.

Ethan is everything Alek wishes he were: confident, free-spirited, and irreverent. He can’t believe a guy this cool wants to be his friend. And before long, it seems like Ethan wants to be more than friends. Alek has never thought about having a boyfriend—he’s barely ever had a girlfriend—but maybe it’s time to think again.

How did I get this book: Review copy from publisher via Netgalley

Why did I read this book: I am always looking for LGBTQIA YA novels to read. This one had good buzz.

One Man Guy is one of those books I wish I had loved more than I did. It’s a LGBTQIA YA novel, featuring a teenage boy who comes out without much drama, a sweet romance that progresses without major setbacks and a funny and moving portrayal of an overbearing Armenian-American family with all its glorious idiosyncrasies.

Alek Khederian comes from an Armenian family where tradition wars with modernity, where family values must be upheld and grades are of utmost importance. That’s how, instead of going on holidays with his parents or attending Tennis camp like he wants, Alek finds himself having to attend summer school in order to bring his grades up. It’s not all bad though as he develops a friendship – and eventually falls in love with – Cool Guy Ethan.

There is a lot that is praise-worthy about One Man Guy. It’s very funny in parts but it movingly tells stories of Armenian history. I loved Alek’s family and their dynamics especially that between mother and sons, between Alek and his older brother Nick and how cooking traditional dishes is a way of developing a bond between father and sons. There is a strong sense of rooted tradition, of keeping memories alive and of difficulties in trying to fit in against a lifestyle that is so different from that of their ancestors. I like how Alek’s perspective is one torn between his two nationalities and how he is able to see the good in both sides whilst being critical of extremist positions.

Another strong aspect of the novel is the relationship between Alek and Ethan. It’s a lovely romance that develops almost effortlessly. Before moving any further, I want to reinforce the importance of LGBTQIA YA stories such as these, in which coming out and falling in love run smoothly without bullying or Dire Consequences. It’s very nice and it’s beautiful and it is essential that stories like these exist in the world.

With that said, there are…flaws. Hiccups in the story, in the writing, in certain aspects of the novel that are just disappointing considering its thematic core.

The teen dialogue is, for lack of a better descriptor, cringe-worthy. Ethan and his “cool, bad boy” slang sounds like a 40 year-old trying to sound like a 15 year-old. The writing is a little clumsy with a lot of telling, of exposition concerning Alek’s life. But those are not what concerns me the most about One Man Guy.

One of the recurring themes of the novel is the idea of what it means to be a man, what it means to be a good man. Alek is constantly reminded by his parents of the importance of sticking to one’s values. Of calling out bigotry, of speaking up and standing up for oneself. Alek calls out Ethan on homophobic language, there is an awareness within the narrative about the problem with racist slurs or using words like “nazi” to define “strong-willed.”

And yet. And yet the book is peppered throughout with sexist language. It seems like being a good man does not mean having the same careful approach when it comes to women. So for example Alek avoids speaking to girls, Ethan runs with a group of boys where “girls are not allowed.” Although Alek’s best friend is a girl named Becky, he is only friends with her because she is different:

Alek really admired Becky, who, unlike most girls her age, was happy to do her own thing.

Beyond that, the book is full of gendered slurs used against boys: “Don’t be such a pussy”. “What a bitch.” Unlike all the other problematic language in the book, no one gets called out for using those.

Here’s another bit that was really jarring when Ethan and Alek are out shopping:

“I think it’s a little early for us to be picking out curtains. We’re not lesbians, after all.”

There is also a really strange attitude toward bisexuality in the book. When Alek comes out to Becky and he says he might like boys and girls she is very adamant that no, he is not. That he is gay. Later on, when talking about her own sexuality, she does entertain the possibility of being bi but only because “women’s sexuality is much more fluid than men’s.” What in the world does that even mean.

This is all the more strange because it’s not like the portrayal of female characters within the book is that bad. All I know is that reading those passages felt like being punched in the face. One minute, I am laughing along with the guys, the next someone is being called a pussy for behaving like a girl, like that’s a bad thing. And it truly pains me that the sexist, gendered language is not ever addressed/questioned in a novel where there is a serious, dedicated approach to call out problematic language when it comes to homophobia and racism (which is obviously highly appreciated).

So in the end, I am torn in half. I liked several things about the novel very much but can only recommend it with caution.

Alek stared at the menu suspiciously. He smelled marinara sauce and a trap.

“Welcome to Trattoria dell’Arte. My name is Lizzy. Can I start you off with something to drink?” The waitress was young, maybe a college student already home for the summer, with a kind, round face framed by bangs that curled up at the bottom. Alek pitied her. She had no idea what she was in for.

“What bottled water do you have?” Alek’s mother asked, while his father and brother inspected the menu like enemy drones searching for their opponents’ weak spots. Even though both of his parents were born in this country, Alek’s mom spoke with the slight accent she inherited from the Little Armenia neighborhood in Los Angeles where she grew up. Most of the time the accent just hovered in the background of her speech, elongating her vowels and giving her an untraceable European mystique. But when she needed to, like now, she turned it on the way a spider might weave an especially enticing web to lull its prey in for the kill.

“No, we’d like to know the brand of the bottled water,” Alek’s father specified.

“Oh,” Lizzy said, as if he might be kidding.

“You see, many bottled waters actually have levels of contaminants equal to or even higher than tap.” Alek’s mom informed poor Lizzy of this information as if doing her a favor.
Alek looked at his older brother, Nik, but he continued ignoring Alek. Alek turned back to Lizzy pityingly, futilely trying to telepathically prepare her for the ordeal about to transpire.

“We have Evian,” Lizzy offered.

Lizzy relaxed. “So, Evian to start?”

“Do you keep any at room temperature?” Alek’s mother asked.

“Excuse me?” Lizzy asked nervously. Alek suspected the full horror of the situation was slowly dawning on her.

Alek’s mom seized the opportunity to educate. “Digesting chilled water actually taxes the body,” she lectured, “because the body has to bring anything it ingests up to its own temperature before it reaches the stomach. That’s why we prefer room temperature water.”

“It’s easier on the system,” Nik added, as if this was something everyone should know.

“I can ask,” Lizzy offered weakly, succumbing to the three-person tag team.

“That would be great,” Alek’s mother continued. “And if not, would you ask someone in the kitchen to warm it to room temperature?”

Lizzy laughed, as if Alek’s mother was making a joke. But Alek knew she wasn’t.

Reading Next: The True Meaning of Smekday by Adam Rex