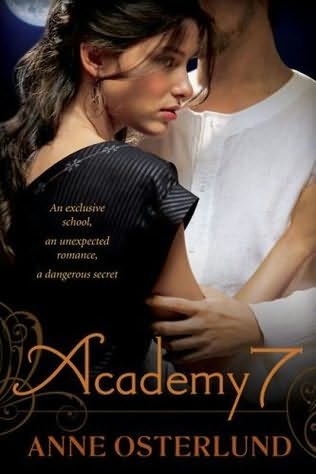 With a past too terrible to speak of, and a bleak, lonely future ahead of her, Aerin Renning is shocked to find she has earned a place at the most exclusive school in the universe. Aerin excels at Academy 7 in all but debate, where Dane Madousin, son of one of the most powerful men in the Alliance, consistently outtalks her. Fortunately Aerin consistently outwits him at sparring. They are at the top of their class until Dane jeopardizes everything and Aerin is unintentionally dragged down with him. When the pair is given a joint punishment, an unexpected friendship, and romance, begins to form. But Dane and Aerin both harbor dangerous secrets, and the two are linked in ways neither of them could ever have imagined. . . .

Stand alone or series: Stand alone (but there is room for a series and I would TOTALLY read more books in this universe)

Why did I read this book: When Academy 7 came out a few years ago (and Ana and I were book smuggling), I confess that I completely overlooked this book, thinking it was a paranormal romance based solely on the cover. Imagine my surprise, then, when I came across the same book years later in my recommended ebooks feed – which classified the book as YA science fiction! After more investigating, I found Academy 7 not only was science fiction, but that it also had some glowing reviews from fellow trusted bloggers. Naturally, I instantly purchased the book and finally got around to reading it.

Since the age of eleven, all Aerin has known is pain and brutality. After their ship crashes on the x-factor planet of Vizhan, Aerin’s father – the only family and other person she knows in the entire universe – dies, and Aerin is sold into slavery. Six years have passed since that terrible day, and Aerin has learned to fight, to fend for herself, and, most importantly, how to break free. Making a desperate last gambit for her freedom, Aerin is able to salvage her father’s crashed spaceship and escape Vizhan. But escape is only the beginning – and Academy 7 is not about Aerin’s daring escape. It is the story of what happens after she is intercepted by an Alliance ship, and she tests into the most prestigious school in the civilized universe.

Like Aerin, Dane Madousin is brilliant and resourceful; unlike Aerin, Dane has grown up with privilege and power (albeit with a controlling, hateful, and abusive family). The son of a powerful Alliance General and Council Member, the roguish Dane has also made the tough academic cut to get into Academy 7 – and it is here Dane and Aerin will meet, where the unlikely pair will become friends, and where they will learn that their pasts intersect in unexpected and tangled ways.

Academy 7 is the first book I’ve had the pleasure of reading from Anne Osterlund, and holy freaking crap, Han Solo, I loved it. The first thing that needs to be said – and I know every review has pointed this out, but it NEEDS to be emphasized – Academy 7 is a science fiction book. I know, the cover makes it look like a YA boarding school paranormal romance, possibly set in the past (not that there’s anything wrong with historical or PNR!), and I get that the publisher wanted to capitalize on Osterlund’s brand and made this book look very much like Aurelia and Exile. However, this packaging is incredibly misleading, because (I repeat): this is a science fiction novel. It’s not a half-hearted science fiction novel, it’s not a fantasy novel with loose SF elements, it is an honest to goodness science fiction novel. With spaceships. And different planets. And souped up technology (ok, mostly science fantasy technology, but don’t let that put you off).

Now that we’ve got genre classification out of the way, on to the good stuff – the story proper, and the wonderful dual protagonists. I love the actual writing style and plot of Academy 7 – yes, this is a book set in a boarding school (think more Hogwarts than Vampire Academy), but it is an incredibly competitive and selective academy that has nothing to do with one’s birthright or money and everything to do with one’s scholastic aptitude. And, as luck would have it, the two top students in the school are our main characters, Aerin and Dane, who vie for the top marks in all of their classes. I love that the two are not thrown into insta-love/super-magnetic-attraction mode when they first lay eyes on each other, and they become gradual confidants and friends – with romance only coming much, much later as a slow-simmering build up. Even better than that, Aerin and Dane are separate people, that exist and breathe and come to life outside of a relationship with each other – I love the fire of Aerin’s convictions and her opinions about intergalactic politics and her need to make the most of the chance she’s fought so hard for, just as I love Dane’s warring desires to do well and defy his family, tempered with timidity of actually breaking away from his family once and for all. We sympathize with Aerin as she grapples with the trauma of her past, the lessons she has taken to heart to survive and finally live as a free woman; we ache with Dane as we learn the truth of his family, and the cruelty of his father and brother. And we are so, so happy when Aerin and Dane find and confide in each other, two lonely souls that are able to find some peace together.

And then there’s the actual story and world, too. The plot is surprisingly insular, more about two students trying to find their place in the world than about big action or explosions or conflict (which suits me just fine). The underlying mystery and driving force of the book is Aerin and Dane’s relationship, and the secrets that lie in their pasts (and their uniquely intertwined family heritages). From a worldbuilding perspective, there is plenty going on to satiate the keen SFF fan. The universe of the Alliance is one fraught with internal tensions and political complications. The Alliance relies on an idyllic Manifesto that is great in spirit but often conveniently ignored when it comes to tricky situations or economic motivations – turning a blind eye to x-planets like Vizhan and its validation of slavery. There’s a cutthroat Trade Union that is amassing power and opposing the Alliance at every turn, and much at stake for the future of intergalactic peace and travel. In the middle of all this turmoil, Aerin, Dane and their fellow cohorts at Academy 7 are being challenged and educated to grapple with these incredible challenges, which is really, really cool.

In terms of shortcomings, I only have a few, very small nitpicks when it comes to Academy 7. Aerin’s father’s story and the reason for his exile from the Alliance feels a little underdeveloped, and the answers all come very conveniently (via magical hologram/simulator technology, no less). The writing leans a little towards the overwrought end of the spectrum. Finally, so much of the action happens off screen, related in class lessons or simulations – and that’s all fine and good, I do wish that there was more going on in realtime with Aerin and Dane.

All things said, I truly loved this book. Academy 7 is a great choice for readers who might be a little tentative to dip their toes into the science fiction genre – but it’s also a great book for longstanding fans of SF, too. All in all, I loved this book and absolutely recommend it as a notable read of 2013.

(So…I’m guessing Aurelia is worth the time and money? I’m excited to read more of Anne Osterlund’s work – if you’ve read her books, please let me know!)

Aerin tried to ignore the bloodstain on the control panel of the Fugitive. Her father’s ship. And his blood. She thrust the image away, cramming it into the small chest at the back of her mind, then slamming shut the lid. Enough memories.

The aged ship rattled as though its exterior had hit turbulence, but the cockpit window showed only the clear black emptiness of space sprinkled with distant stars. Aerin checked the fuel. The dial remained in the same slot it had been in when she had taken off hours before. As did the arrow on the pressure monitor.

The rattle grew more intense, every piece of the former trade ship seeming to move. Metal sheeting wobbled back and forth on rounded screws. Exposed wires trembled from open patches in the wall. Cords swung from the ceiling.

The message was clear. She was not going to make it. Not to the next planet. Not even to the next space station. If only the ship’s computer would tell her what was wrong. Then she might be able to fix it. But though the autopilot functioned well enough to complete take-off and follow a course, the screen remained a sullen blank.

The hasty repairs she had completed in her final moments on Vizhan had been enough to get the rickety ship off the ground, through the atmosphere, and into space. They were not going to be enough to save her life. Not without help.

Mouthing a silent plea, she switched on the radio. A green light glowed. Thank you, she whispered in her mind, then turned the volume dial with shaking fingers. A soft hum grew louder. Working! At least it sounded like it was working.

She tucked her bare feet beneath her and slumped back in her chair. Nothing she could do now. Just keep the ship aimed for the coordinates marked in the logbook as those of the nearest space station and hope someone came out of the vast void.

Her eyelids grew heavy with the weight of exhaustion. Perhaps it would be better just to crawl into one of the ship berths, her father’s since her own cot would now be too small for even the skinny limbs of her seventeen-year-old body.

Maybe she should just go to sleep. Let herself drift, thankful she would die free, here in her father’s ship as he had. Free from the hunger and violence of Vizhan. From the terror.

Fear is not the enemy. Love is—she recited the mantra that had kept her alive these past six years. Neither her conscience nor the ship’s vibrating hull would let her rest. She would sit here, she knew, staring out the window, adjusting knobs and dials, fighting this cranky piece of machinery as long as she could.

Until help arrived or all breath left her body.

Reading Next: The Broken Lands by Kate Milford