Blossom and Bubbles reviewed Just the Sexiest Man Alive, the first book by Julie James and they both loved it. When Practice Makes Perfect came out it was a given that they would read and join forces to review it. You know how it goes right? Bubbles reviews it here and Blossom (AKA KatieBabs) at her place. But what of Buttercup? Well she is still AWOL. Last we heard she decided to ditch her “training” with Batman, Wolverine and Gambit because according to her they are “wimpy do –gooders” (her words, not ours) and decided to join forces with Rorschach. We dread the day she will come back. The word “intervention” has been flowing around the Powerpuff Girls’ HQ. 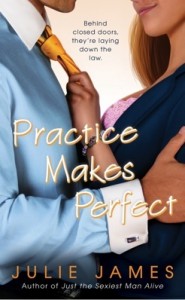 Why did I read the book: I loved Just the Sexiest Man Alive and was really looking forward to reading Practice Makes Perfect. When it came along in the post from Berkley, I was super happy!

Summary: When it comes to the laws of attraction, there are no rules The battle between the sexes is about to make these two lawyers hot under the collar. Opposites collide when two lawyers try to make partner at the same firm. Payton Kendall is a feminist to the bone. Cocky J.D. Jameson was born privileged. But when they’re asked to join forces on a major case, they gain a newfound awareness of each other’s personal assets. The partnership spot will be offered to only one of them, though. The competition heats up. Sparks fly. Let the games begin.

I will start by being blunt and saying: I wish more books were like this one. Deliciously funny, easy to read, enjoyable and gripping. You know the type: when you have to stop reading because real life interferes, all you think about is how much you want to go back to the book and know what.happens.next.

Here are the basics: two hot shot lawyers working for the same prestigious law firm in Chicago. Enemies for the past 8 years although no one in the office has any clue of their hostility towards each other as they are masters in playing cool in public. Now, they are both running to make partner in the firm when they learn they must work together to bring in a big new client.

She: Payton Kendall, ambitious, smart and gorgeous; vegetarian, daughter of a hippie, activist mother, went to public school. Feminist, strong and proud of her own achievements.

He: J.D. Jameson, ambitious, smart and hot; Harvard educated, from a well-respected and moneyed family. Traditional, hard-working and proud of his own achievements.

These two now need to deal with the mental and physical strain of their career while at the same time coming to a point of realisation that hey, maybe they are perfect for each other. But before getting to that point, there are antics, pranks, arguments and sexual tension by the bucket loads (without any actual, graphic sex scene) that has the reader (at least this one) glued to the pages. For example:

J.D. apologises for an assumption he made.

“Is that it?” Payton asked, not entirely mollified by this apology.
“Oh I was just waiting for you to say something sarcastic about assholes and assumptions.”
Payton gave him a level stare. “As if I would be that cliché”.
She noticed he was watching her. Again. “What?”.
J.D. grinned.”Now I’m waiting for you to do that thing with your hair. The little flip.
Payton glared. Note to self: invest in hair clips.
“You know, as apologies go, this one could use a ton of improvement”.

The farcical situations the characters find themselves involved into (dear lord, the courtroom scene? I nearly choked with laughter) the sharp dialogue, the repartee, the strong female characters who stand on equal grounds against their male counterparts and the obvious attraction despite the hostility they may feel for each other are characteristics of one of my favourite types of romantic comedies: the Screwball Comedy. I am a huge fan of the genre (I collect movies by Howard Hawks, George Cukor and Frank Capra) and Practice Makes Perfect is so much like a Screwball Comedy, I can only but rejoice in reading this book.

Another aspect that distinguishes Practice Makes Perfect (and Just the Sexiest Man Alive) and makes them extraordinary in the midst of the romance genre is the fact that there is hardly any mushiness ( which is also another characteristic of the Screwball Comedy by the way) if at all. Pretty much every scene has some sort of funny innuendo and the characters start fighting and they go down fighting – yeah they may come to realise that they love each other but they also LOVE the parks that fly when they fight. For those who never watched a classic Screwball comedy and would feel more at home with a recent comparison: reading Practice Makes Perfect is akin to watching one of the best Ally McBeal’s episodes but with Joss Whedon’s dialogue.

Practice Makes Perfect is brilliantly written not only for the two protagonists but it has some fairly interesting secondary characters (like The Perfect Chase) and it touches relevant and important points such as genre and class in romance (For a more in-depth analysis of these points please read Jessica’s review of Practice Makes Perfect here). J.D. and Payton’s legal discussions held my complete interest as did their relationship with their parents and friends.

My one grippe with the book is the one added conflict close to the end because of something that J.D. did a few years ago. It doesn’t come out of nowhere because there were a couple of red herrings pointing that it would happen at some point BUT I did think it was completely unnecessary. Not only because there was enough conflict in their lives to make their relationship interesting but also because that particular J.D.’s action was, I felt, out of character. Look at me, defending the hero! J.D. acted like a jerk but a jerk he was not. Furthermore, the outcome of that was to have the hero getting advice from his best friend in an almost play –by – play of what happens in Just the Sexiest Man Alive which almost pulled me away from the book gravitas to wonder about formulas and the such but thankfully this happens only for a few pages and look! There comes The Grovel. And the banter again, so all is well in the world after all.

In the end it all boils down to this: if practice makes perfect, then I cannot wait for what Julie James comes up with next.

Notable Quotes/ Parts: It has got to be the courtroom scene when JD does the shoe prank. I will not spoil it but I was crying I was laughing so much. But the scene is also brilliant because it has several layers: there is not only the hilarous situation of the prank itself, but it is also a fantastic moment to show how strong Payton is and it has a very interesting outcome for JD – who compares his own reaction to a prank she played on him to her reaction to this one and…..something happens right then inside of him.

Additional Thoughts: If you liked Just the Sexiest Man Alive and Practice Makes Perfect, go back and watch some of the movies from the golden era of Screwball Comedies. Usually they have “enemies” turned lovers or divorced couples getting back together stories. Really, they are good fun and awesome.

It all started in 1934 with It Happened One Night by Frank Capra (one of my favorite directors). A road movie with Clark Gable (pre-Gone With the Wind) and Claudette Colbert. 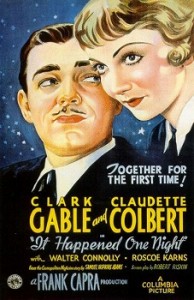 Ellie: I just had the unpleasant sensation of hearing you referred to as my husband.
Peter: Oh yeah, I forgot to tell ya about that. I registered as Mr. and Mrs.
Ellie: Oh, you did…Well, what am I expected to do? Leap for joy?
Peter: I kinda half expected you to thank me.
Ellie: Your ego is absolutely colossal.
Peter: Yeah, yep. Not bad. How’s yours?
Ellie: You know, compared to you, my friend Shapeley is an amateur. Just whatever gave you any idea I’d stand for this?
Peter: Hey now, wait a minute. Let’s get this straightened out right now. If you’re nursing any silly notion that I’m interested in you, forget it. You’re just a headline to me.
Ellie: A headline? You’re not a newspaper man are you?
Peter: Chalk up one for your side.

Then you have another good example with His Girl Friday directed by Howard Hawks (another fantastic director) and starring Cray Grant and Rosalind Russell – this one is of the divorced-get-back-together variety. 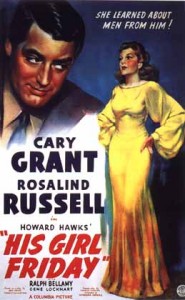 Hildy: A big fat lummox like you – hiring an airplane to write: ‘Hildy, don’t be hasty, remember my dimple.’
Walter. It delayed our divorce twenty minutes while the judge went out to watch it.
Walter: I’ve still got the dimple and in the same place.

The Philadelphia Story directed by yet another favorite of mine, George Cukor with Cary Grant, Kate Hepburn and James Stewart. Another one that has a couple that start out divorced then remarry by the end. 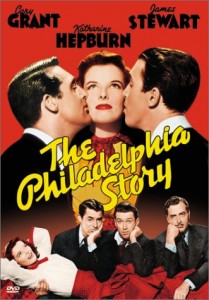 C. K. Dexter Haven: Sometimes, for your own sake, Red, I think you should’ve stuck to me longer.
Tracy Lord: I thought it was for life, but the nice judge gave me a full pardon.
C. K. Dexter Haven: Aaah, that’s the old redhead. No bitterness, no recrimination, just a good swift left to the jaw.

More recently though there was a pretty good movie that I watched many times. I Love Trouble with Julia Roberts and Nick Nolte, it has all the elements of screwball comedy and I thought it was good fun, even though critics seem to disagree with me. I know, shocking. 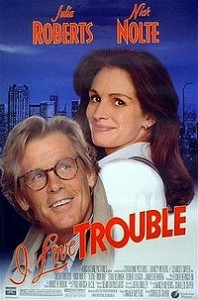