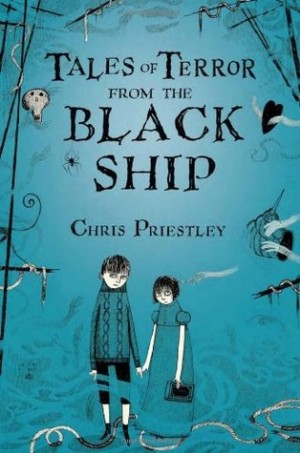 Title: Tales of Terror from the Black Ship

When Ethan and Cathy fall ill during a storm, their father must leave them to fetch the doctor. . .but they are not alone for long. A sailor comes begging for shelter. So, the children agree to let him sit out the throes of the storm as they listen to his grisly tales. But something about the man puts Ethan on edge, and he is anxious for the storm to blow over, their father to return and the long night to come to an end.

Storms whistling through the sails, evil pirates pacing the floorboards, and of course, a haunted ship of ghostly beings… All this and more is waiting to give you goose bumps in an atmospheric and thrilling collection of spooky seafaring tales.

In a creaky inn set atop a windswept cliff overlooking a churning sea, there lives a sad family. A father, driven to madness by the death of his wife and by his fondness for drink, watches over his two children – an older boy named Ethan, and a younger girl named Cathy. One evening, a great storm seizes The Old Inn, and both Ethan and Cathy are struck down with a terrible illness. Their father, shaken out of his drunken stupor, braves the gale to fetch help for his children, but tells them both that they must stay put and not open the door to any strangers.

As soon as their father leaves, however, a young sailor named Jonah Thackeray comes knocking – seeking refuge from the storm outside.

The children, feeling better from their mysterious illnesses, let the wary traveler in.

All that stormy night, while the squall blows itself out, Thackeray repays the children for their kindness by telling them stories – chilling, macabre stories of monsters, ghouls and death on the high seas.

There’s something wondrous about the tradition of horror stories told in anthology format, tied together by a single larger arc. From EC comics and television/movie traditions like Tales from the Crypt to Cryptshow, I’m a huge fan of this narrative technique. Then, add to this the extra-creepy factor of gearing such macabre tales towards a middle grade audience! It’s somehow scarier, more effective, to read these stories intended for young children – less blood, perhaps, but more offhanded cruelty and true terror. At least, that’s how I’ve always felt about scary stories for the middle grade audience (see Scary Stories to Tell in the Dark, The House with a Clock in Its Walls, Coraline, anything written by Roald Dahl, etc).

Tales of Terror from the Black Ship is no exception; suffice it to say, I enjoyed this collection from Chris Priestley very much indeed.

Each of the tales is on-theme with the overarching sea-faring setting, which is both a good and bad thing. Good, because it does tie the collection together in a uniform and satisfying way (perhaps better so than its predecessor, Uncle Montague, did); bad, because the stories are limited by the time period (nebulous 1800s-ish) and a markedly male-centric focus and tone. There’s less flexibility for stories about djinn or enchanted picture frames or cliques gone wrong in this volume of terror – there’s also a level of repetition to the stories, as they all feature similar characters and take place aboard similar ships. (There’s a reason for this, but it’s still a limiting setup.)

Still, at the end of the storm, Tales of Terror from the Black Ship is an effective, chilling collection of stories – perfect for horror fans of all ages. If you haven’t tried Chris Priestley’s horror collections yet, I highly recommend giving them a shot.

Notable Quotes/Parts: As with last year, I highly recommend you check out the UK Website for the book to get a taste for the deliciously creepy illustrations from Dave Roberts, as well as for more information about the book.

You can also download The Boy in the Boat, one of my favorite stories from the collection HERE.

Reading Next: Hangsaman by Shirley Jackson