Book Review: Child of a Hidden Sea by A.M. Dellamonica 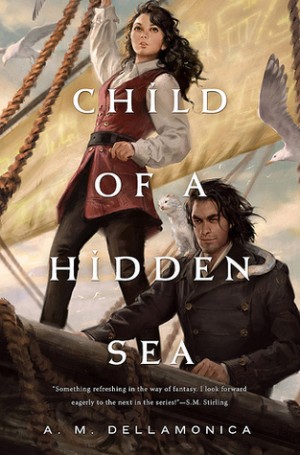 Title: Child of a Hidden Sea

One minute, twenty-four-year-old Sophie Hansa is in a San Francisco alley trying to save the life of the aunt she has never known. The next, she finds herself flung into the warm and salty waters of an unfamiliar world. Glowing moths fall to the waves around her, and the sleek bodies of unseen fish glide against her submerged ankles.

The world is Stormwrack, a series of island nations with a variety of cultures and economies—and a language different from any Sophie has heard.

Sophie doesn’t know it yet, but she has just stepped into the middle of a political firestorm, and a conspiracy that could destroy a world she has just discovered… her world, where everyone seems to know who she is, and where she is forbidden to stay.

But Sophie is stubborn, and smart, and refuses to be cast adrift by people who don’t know her and yet wish her gone. With the help of a sister she has never known, and a ship captain who would rather she had never arrived, she must navigate the shoals of the highly charged politics of Stormwrack, and win the right to decide for herself whether she stays in this wondrous world . . . or is doomed to exile.

Stand alone or series: Can be read as a standalone novel (which may turn into a series?)

Why did I read this book: I was sucked in, superficially, by the awesome cover art, and the hidden world aspect of the book. Plus, pirates! Sea-faring fantasy nations! And I’ve been meaning to try A.M. Dellamonica’s work for a while – what better place than to start with this new book?

Experienced diver, marine biologist, and adopted daughter Sophie Hansa has always felt something missing from her life. At twenty-four-years old, Sophie has managed to finally track down her biological birth mother – unfortunately, it’s not the joyous, or even civil, reunion she’d envisioned. Rejected but not ready to give up, Sophie follows her mother and stumbles across a woman who she believes to be her biological aunt getting beat up by some thugs. When Sophie steps into the fray, she finds herself whisked away, afloat in the middle of a strange sea, with native bioluminescent wildlife the likes of she’s never seen on Earth. Soon, Sophie discovers that this strange land of impoverished villagers and weather-worn sailors is not of her own world. This is a land called Stormwrack, a world of island nations of varied cultures, beliefs, and, yes, impossible magic.

More importantly, Sophie discovers that she is born of this world – that her biological mother exiled her when she was born, for reasons unbeknownst to Sophie. Now, with the help of a newfound younger sister Verena (also of Stormwrack), her aunt’s vessel, ship captain and crew, as well as her own adopted brother Bram (from San Francisco), Sophie must unravel the mystery of her lineage and the political machinations that threaten to destroy her world.

The first book in what might possibly become a series, Child of a Hidden Sea is the delightful, engaging new fantasy novel from A.M. Dellamonica. The book makes unabashed use of familiar fantasy standbys – the hidden world access by a portal trope (see: Narnia, Harry Potter, and many other examples), a favorite of mine – and it does by these tropes very, very well. I loved the juxtaposition of San Francisco and Stormwrack, particularly the technological quirks that meant some items would work in the fantasy world (Sophie’s camera could take and retain pictures, for example, but her phone could not find any signal when there). While I wish there was a little more detail given to the actual mechanics of the portal that would transport one from one world to the other, the rest of the worldbuilding elements were so strong as to make up for that one tiny nitpick. I loved the seafaring nations of Stormwrack, from the many ships and federated fleets patrolling its waters, to the different cultures, beliefs, and socio-economic divides that separate the different island nations of this fantastical world. This, plus the political machinations that are unveiled as Sophie unwittingly inherits her role as heir and courier, make Child of A Hidden Sea a memorable, fast-paced adventure on strange high seas.

OH, and that’s to say nothing of the magical systems in this book! The concept of inscribing magic by using focused intent on objects and people is a fantastic touch – I also very much appreciate the rules that Dellamonica imposes on magic use in this world. (For example, while Sophie can be inscribed upon to learn Fleetspeak, she cannot easily read the language, too.) The idea that magic use extolls a price on the person being magicked also is a fantastic touch that I appreciated very much.

On the character front, Child of A Hidden Sea also excels. Protagonist Sophie is sympathetic and genuine, and her motivation to learn more about her origins and her family comes across as wholly believable. Her insecurities when compared to her siblings – her fierce half-sister Verena, and her genius adopted brother Bram – only enhance Sophie’s sympathetic nature, as she struggles with her own feelings of inadequacy and confidence. Too, I loved the trhread of family throughout the book – for all her insecurity, the bond between Sophie and her siblings is strong and grows more powerful throughout the book, just as she discovers who she really is and why she has been sent away by her birth parents.

Sophie Hansa had barely worked out that she was falling before she struck the surface of an unknown body of water.

First, there’d been a blast of wind. A tornado? Rushing air, pounding at her eardrums, had plucked her right off the ground. Howling, it had driven her upward, pinwheeling and helpless, over the rooftops of the houses and shops, carrying her up above the fog, in a cloud of grit and litter, trashcan lids, uprooted weeds, discarded heroin needles, and a couple very surprised rats.

She remembered pain as something tangled and wrenched her arm. Then the upward thrust of wind blew itself out, taking with it the sunlight above. One second she was flying and sunblind. The next, she was plummeting, dead weight in the dark.

Terror jolted through her. She drew breath to scream, only to feel the spank of the sea, a wet fist of concrete between her shoulder blades, stinging even as it slowed her fall. She plunged beneath the waves, head first.

This, at least, was her element. Despite the fear and disbelief—the ocean? I made it to the water?—she instinctively held her breath as she went under.

Reaching out with the grace of long practice, arms extended, her body twisted to break her downward momentum.

A jerk—the arm—brought the motion short. Weight pulled her downward. The nylon strap of her camera case, looped around her wrist, had snagged something heavy.

She tried to slide it off, but there was no slack. Instead, she yanked up her skirt with her free hand, clearing her legs and scissor-kicking for the surface. One, two. For a frightening moment, she made no headway. Then she, the camera case, and whatever it had hooked all started moving upward. Sophie broke water, blowing to clear her nose and mouth, inhaling deeply.

Taste of salt, definitely not some lake …

Reading Next: Winterkill by Kate A. Boorman

Over at Kirkus: Six-Gun Snow White by Catherynne M Valente