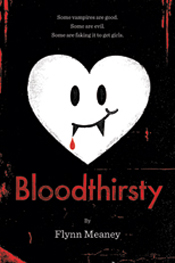 Stand alone or series: it can be read as a standalone but I think there will be a sequel.

Some vampires are good. Some are evil. Some are faking it to get girls.

Awkward and allergic to the sun, sixteen-year-old Finbar Frame never gets the girl. But when he notices that all the female students at his school are obsessed with a vampire romance novel called Bloodthirsty, Finbar decides to boldly go where no sane guy has gone before-he becomes a vampire, minus the whole blood sucking part.

With his brooding nature and weirdly pale skin, it’s surprisingly easy for Finbar to pretend to be paranormal. But, when he meets the one girl who just might like him for who he really is, he discovers that his life as a pseudo-vampire is more complicated than he expected.

This hilarious debut novel is for anyone who believes that sometimes even nice guys-without sharp teeth or sparkly skin– can get the girl.

Why did I read the book: I saw the cover and tagline, thought it would be a fun book.

How did I get this book: I picked up an advance reading copy at Book Expo America in May.

Finbar Frame got what he perceives to be a sorry lot in the family’s genetic pool: he is plain, awkward, emotional, geeky, allergic to the sun, all of which combine to make him unpopular and teased at school. His twin brother Luke on the other hand, got the cool name, the good looks, the sportive gene and is popular with everybody, above all with girls. So, Finbar sick and tired of being teased, sick and tired of being lonely and observing how teenage girls seem to be so into vampires lately, decides he must pretend to be one: he will act mysterious, he will pull what he thinks is a “Vampire Attitude” and then he will be popular and he will get a girlfriend.

I will just cut to the chase and say that I suffered a severe case of irritation reading Bloodthirsty.

I picked it up because it sounded good, like it would provide me with a few hours of fun. Just look at the premise: a boy called Finbar, who is geeky, not popular, or handsome and who decides enough is enough and makes the decision to ride the crazy Vampire wave and pretend to be one to get girls. It sounds ludicrous, right? But the sort of ludicrous with a lot of potential if handled well. Unfortunately I don’t think Bloodthirsty did.

It started well enough, the writing is competent and the main character’s voice, at least to start with, was inviting. There are some truly funny sequences like the one where he is kissed by a girl and at first he thinks she is giving him CPR; or when he tried to pull the Edward Cullen smouldering eye stare and was offered a Pepto.

This premise is an interesting one because it makes fun of a current trend while at the same time serving as a metaphor: the main character believes he needs to go through a transformation, he thinks he needs to be someone else in order to be accepted. It is of course, a story about loving oneself and accepting you for who you are.

But that is not all that this is. The premise is also a problematic one because it implies that girls are gullible and cannot tell reality from fiction. That would be ok, if it was something that the character believed or simply did not think through and as the douchebag (because a guy who thinks that he needs to lie to get girls, is a douchebag) that he is it, which would make sense. HOWEVER, Finbar is not presented as a douchebag, he is not even presented as a flawed character (except for a couple of things he realises in the end) , he is presented as the hero. The fact that some of the girls DO believe that he IS vampire, even though he puts little to no effort into pretending to be one (which is strange in itself since this is the premise of the book, but the story keeps wavering), is quite frankly, insulting.

But that is not all that irritated me. Oh, no. What irritated me the most was the nature of the bullying in the book, how Finbar reacted to it and how the story does not address it at all. Basically Finbar is bullied by some of the guys at his former school and at his new school by being called a “fag”. People tease his name (“Fagbar”; “what kind of gay name is that”) , tease him for the things he does or does not do. His response is to want people to stop calling him gay. He won’t tell his parents for example that he hang out with another boy because it would give “the wrong impression”. He needs a girlfriend because if he has a girlfriend no one can call him gay.

Finbar doesn’t seem to have a problem with the bullying itself which is of course, a bad thing, he has more of a problem with what he is been bullied for because in this book, “gay” is clearly an insult. It is used as an insult, it is taken as an insult and no one says anything to the contrary, or thinks anything to the contrary. There are no consequences, no resolution, no evaluation, no nothing. This is just a part of the story that is simply there and goes away when Finbar gets a girl.

Newsflash: “Gay” is not an insult. And it bothered me that it is treated as such without any further consideration by any of the characters or addressed at all in the story.

I am pretty sure someone will say, as usual that I am a humourless reviewer that takes things too seriously. But I am a firm proponent of the * idea that words matter. That words in a book matter a lot. That words in a book for teenagers matter exponentially more. Given the current situation of the world, where kids are killing themselves for being bullied like this, I think this is even more crucial and I wish that the book had addressed it somehow.

All that and I have yet to mention how everybody who is not like Finbar (bookish, sensitive, emotional) is sort of vilified in this book. I think it is super awesome to want to show that kids that like books and geeky stuff and are not popular are cool too but why vilify the other side, the popular kids, the kids who like to party (especially girls?). Finbar behaves like an asshole when he finds out the girl he likes used to party a lot and hook up with guys, but everything is forgiven when she explains she was not “really” like that, she was just pretending, she really is just like Finbar: geeky. Boy, the more I think about all this, the more irritated I get, so I will just stop here.

I hoped the book would be fun and clever but it turned out to be a disappointing, empty gimmicky book. And would you like to know how much of a gimmick the idea really is? At the end of the book, the author sequel baits us by making the twin brother start pretending to be a werewolf to get a girl.

Notable quotes/Parts: I will just skip this one.

Reading next: Four and Twenty Blackbirds by Cherie Priest

*ETA: I deleted the word “crazy” after the comment left below.