And now for something completely different: Ana reads The Likeness, a psychological thriller by Tana French 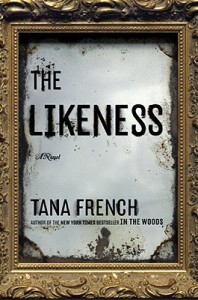 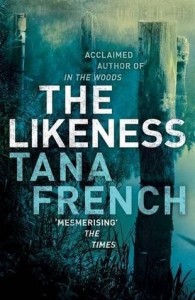 Six months after the events of In the Woods, Detective Cassie Maddox is still trying to recover. She’s transferred out of the murder squad and started a relationship with Detective Sam O’Neill, but she’s too badly shaken to make a commitment to him or to her career. Then Sam calls her to the scene of his new case: a young woman found stabbed to death in a small town outside Dublin. The dead girl’s ID says her name is Lexie Madison (the identity Cassie used years ago as an undercover detective, and she looks exactly like Cassie.

With no leads, no suspects, and no clue to Lexie’s real identity, Cassie’s old undercover boss, Frank Mackey, spots the opportunity of a lifetime. They can say that the stab wound wasn’t fatal and send Cassie undercover in her place to find out information that the police never would and to tempt the killer out of hiding. At first Cassie thinks the idea is crazy, but she is seduced by the prospect of working on a murder investigation again and by the idea of assuming the victim’s identity as a graduate student with a cozy group of friends.

As she is drawn into Lexie’s world, Cassie realizes that the girl’s secrets run deeper than anyone imagined. Her friends are becoming suspicious, Sam has discovered a generations-old feud involving the old house the students live in, and Frank is starting to suspect that Cassie’s growing emotional involvement could put the whole investigation at risk. Another gripping psychological thriller featuring the headstrong protagonist we’ve come to love, from an author who has proven that she can deliver.

Standalone or series: Standalone novel (but part of a series of related novels in the Murder Squad)

This will be less of a review and more of a recommendation kind of post. Actually, even maybe something like OMG TANA FRENCH WHERE HAVE YOU BEEN ALL MY LIFE THIS BOOK IS AMAZING GIVE ME MOARS LIKE THIS.

So. As it just so happens, the other day I received an ARC of Tana French’s upcoming new novel The Secret Place. Knowing nothing at all about it or its author (I know, right?) and being in the mood for a crime novel, I started reading it. And couldn’t stop because it was.So.Good.

I then promptly read The Likeness, after Twitter told me to read that next (Ask Twitter: the scientific approach to What To Read Next). I soon realised that I am reading this series out of order as The Likeness is book 2 in the Murder Squad series but since each book has its own protagonist, it doesn’t really matter, except now I will go back to the beginning and read everything in order, starting with In The Woods. Anywhoodles.

Detective Cassie Maddox (one of the detectives in In The Woods) is out of the Murder Squad and working Domestic Violence, trying to get her life back into shape after that last case but not really succeeding because she is still kind of recovering, her partnership with her best friend Rob now in shambles, her romantic relationship with good guy Sam still very new.

Then one evening she gets a phone call from Sam sounding out of breath and immensely relieved when she answers. He asks her to join him at a crime scene where a young woman stabbed to death was found in the ruins of a small cottage within the grounds of a Stately House just outside Dublin. When she gets there she finds out why Sam was so shaken up: the dead girl looks exactly like Cassie. Not only that, her ID says her name is Lexie Madison, the fake identity Cassie made up years ago when she was working undercover.

With no leads or suspects, Cassie’s former undercover boss comes up with an outrageously dangerous plan. To pretend the girl never died, to send Cassie undercover as Lexie Madison back into the viper’s nest, “recovering from her stab wounds” so that she can try to find out who killed Lexie and why. At first, Cassie is adamant that she does not want back into the Murder Squad but she can’t deny that she is intrigued. Who is Lexie? How does she look so much like Cassie? In time, she learns about the life this Lexie was living – a university student who shared the old stately house with four extremely close friends in a relationship that is both maybe a little weird but also profoundly seductive to Cassie.

When the investigation hits a wall, Cassie says yes. She says yes because deep down she misses the thrill of undercover work, the excitement of a murder case. Plus, the idea of living outside her own life for a bit is too good. So she goes back undercover. She is going to pretend to be Lexie, who was also pretending to be Lexie, who was Cassie in the first place.

Doppelgangers. My first immediate reaction to this would be like: are you for reals? Because this sounds like a completely over the top, implausible premise, doesn’t it? But here is the magic of Tana French: somehow this works. There is thankfully, an in-narrative acknowledgement of how this is so improbable but beyond that, the suspension of disbelief is made possible by the way the detectives approach their work and the careful construction of Cassie’s undercover work. I was convinced not only of the probability of all of this happening but also that the police’s chosen course of action was the only possible way to solve this crime. So we are already off to a good start right there.

But really, the most amazing thing about this book is the way the characters are constructed. This book is much more than a cold, straightforward investigation of the crime itself (although as this side of the story progresses and the tension mounts, the more you want to know). We have intense, in-depth characterisations of just about anybody here: the suspects, the victim and the detectives on their own and their web of relationships. It even gives life to the house and its former inhabitants. In addition, there is also an affecting look at issues of class and gender in Ireland through the years.

It’s Cassie’s emotional background that carries the book through. From her portrayal as a competent, dedicated detective who enjoys her work and unabashedly feels thrilled about working undercover to her more recent psychological background that might mean she is going to be compromised as she investigates this one crime. One of the best things about her narrative is the way she looks at Lexie’s friends: perhaps to start with there is a lot of projected observations stemming from her own childhood, her recent trauma and the fact that she misses her best friend so dearly. Even as they all sound cagey and possibly murderous, it is easy to understand and sympathise with Cassie’s – difficult and sometimes dodgy – decisions as she gets closer and closer to them. It’s all just so engaging, and intense, and suspenseful, and complex and not black and white and difficult and ultimately, about the price you pay for the choices you make.

Do you know how I feel after reading these books? Energised. I feel energised, like: what else is there that I don’t know about? What other bookish treasures are waiting for me?

This is Lexie Madison’s story, not mine. I’d love to tell you one without getting into the other, but it doesn’t work that way. I used to think I sewed us together at the edges with my own hands, pulled the stitches tight and I could unpick them any time I wanted. Now I think it always ran deeper than that and farther, underground; out of sight and way beyond my control.

This much is mine, though: everything I did. Frank puts it all down to the others, mainly to Daniel, while as far as I can tell Sam thinks that, in some obscure and slightly bizarro way, it was Lexie’s fault. When I say it wasn’t like that, they give me careful sideways looks and change the subject — I get the feeling Frank thinks I have some creepy variant of Stockholm syndrome. That does happen to undercovers sometimes, but not this time. I’m not trying to protect anyone; there’s no one left to protect. Lexie and the others will never know they’re taking the blame and wouldn’t care if they did. But give me more credit than that. Someone else may have dealt the hand, but I picked it up off the table, I played every card, and I had my reasons.

Reading Next: Half a King by Joe Abercrombie

Joint Review: When We Wake by Karen Healey