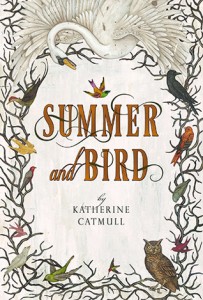 When their parents disappear in the middle of the night, young sisters Summer and Bird set off on a quest to find them. A cryptic picture message from their mother leads them to a familiar gate in the woods, but comfortable sights quickly give way to a new world entirely—Down—one inhabited by talking birds and the evil Puppeteer queen. Summer and Bird are quickly separated, and their divided hearts lead them each in a very different direction in the quest to find their parents, vanquish the Puppeteer, lead the birds back to their Green Home, and discover the identity of the true bird queen.

With breathtaking language and deliciously inventive details, Katherine Catmull has created a world unlike any other, skillfully blurring the lines between magic and reality and bringing to life a completely authentic cast of characters and creatures.

How did I get this book: I got a review copy at BEA

Why did I read this book: I was attracted by the cover (what a beautifully packaged book) and captivated by the blurb.

Once upon a time (and at around that same time) a dancer wished for nothing more than to be the Queen of the Birds. She found the hidden Swan Queen’s robe and took it away leaving the Swan Queen stranded as a human and her bird-courtiers bereft and lost. The dancer became the bird’s Regent and a Grand Master of Events.

Once upon a time (but only a few years after the aforementioned events) two young sisters – Summer and Bird – woke to find their parents gone. A cryptic message from their mother lead then to the forest and to Down, a fantastical world inhabited by talking birds and the string-pulling Puppeteer. There, they separated and each took a journey to find not only their parents but also their true souls.

Summer and Bird unfolds with the parallel stories of the two sisters, following their quest and coming of age arcs in a Fantasy setting with a fairytale atmosphere and patterns. Those elements are incorporated in the story mostly via its narrator – an omniscient, self-aware narrator who often foreshadows by using asides – in a way that makes Summer and Bird a book that is very much aware that it is a fairytale.

This proved to be a mixed bag for me. This self-awareness works beautifully when it comes to its themes. At its core, Summer and Bird is a raw and poignant tale of a family split apart by both external and internal events. Things are somewhat set in motion by its villain but there is a clear acknowledgement that what matters here are the actions and reactions of the main characters. The examination of Summer and Bird’s parents’ relationship for example and especially how it came to be, what brought the two together and what kept them together is incredibly thought-provoking. It is a relationship that follows a recurring motif in fairytales: the folkloric creature who is both human and animal and whose magical pelt is stolen by a lover. Two of the main emotional focal points of the novel are both this morally ambiguous relationship and the way it affects the lives of their children. Another one is the relationship between the two sisters and the way they feel about each other, about their parents and how they see the world. Theirs is a charged relationship, fraught with loyalty and devotion as well as rivalry and jealousy.

There is also a great exploration of themes like what happens to a kingdom when there is a complete reliance on a monarch to lead them – and what happens to the subjects when their Queen disappears. I loved to see the different possible ways that such an event can affect lives – there are those that despair and those who find a different way and so on and so forth.

That said, this self-awareness also kind of allows the writer a freedom to play with the characters and plot arbitrarily, in a way that didn’t quite feel natural. There is a very strong tendency to explain things via innate talent and hard-wired (rather than acquired) abilities that didn’t sit that well with me.

Granted that in a way, those actually play really well with the fairytale motif and how one can read stories and clues in different ways but unfortunately those types of conversations were repeated many, many times. The meandering, overlong and repetitions nature of the story detracts from any sense of urgency. I am not exaggerating: when under extreme emotion characters would simply sit down to cry abundant tears and given the number of times this happens, those tears would be enough to fill an entire Ocean of Angst.

Despite all that, there is a lot here that is actually really, really good – the themes, the characters, the beautifully imagined world. I especially loved how this is a story that acknowledges the potential for darkness in fairytales without making this fable an entirely bleak one and this route is followed all the way through to its bittersweet conclusion. I’d really recommend it to those who love fairytales and who wouldn’t mind a slightly flawed (and perhaps a little bit boring, if I am being honest) execution.

“A map is a song. It’s different when different people sing it. . .You will make this your own song, sing it your own way.”

Rating: 6 – Good, recommended with reservations (and leaning toward 7)

Reading Next: Drama by Raina Telgemeier

Over at Kirkus: Insignia by S.J. Kincaid