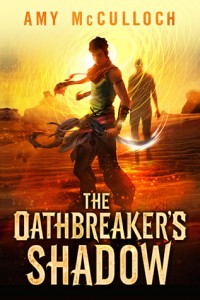 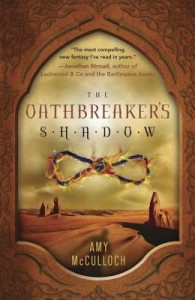 Fifteen-year-old Raim lives in a world where you tie a knot for every promise that you make. Break that promise and you are scarred for life, and cast out into the desert.

Raim has worn a simple knot around his wrist for as long as he can remember. No one knows where it came from or which promise of his it symbolizes, and he barely thinks about it at all–not since becoming the most promising young fighter ever to train for the elite Yun guard. But on the most important day of his life, when he binds his life to his best friend–and future king–Khareh, the string bursts into flames and sears a dark mark into his skin. Scarred now as an oathbreaker, Raim has two options: run or die.

Stand alone or series: First in a duology

How did we get this book: Review copy + bought

Why did we read this book: We’ve had this book on our radar since it came out last year but it wasn’t until Ana saw the author speak on a panel over at YA Lit Con a few weeks ago that it finally got pushed to the top of the TBR mountain.

Imagine if breaking a promise had real, painful, physical consequences. Imagine a culture in which a whole set of values is built around oath-keeping; where oath-breaking leaves a scar which will mark its carrier as a traitor and a liar. Where those oath-breakers are cast out into the desert, always followed by a haunting shadow, never able to return home. Imagine that, imagine the weight that an oath, a promise, a vow carry and what it takes to decide to make one.

This is the world where Raim, the protagonist of The Oathbreaker’s Shadow lives in. His is a nomadic world, partly inspired by Mongolian culture in which each clan has its specific roles. His own path will lead him to become a Yun, a group of elite warriors who protect the Khan. As the story opens Raim is preparing to cross into adulthood, ready to initiate his full training as a Yun. Above all, he is ready to swear alliance to his best friend Khareh, their future Khan. The two friends wish to become entangled forever when Raim becomes Khareh’s Protector.

But just as Raim binds his life to Khareh, the unthinkable happens. The knot – a symbol of an oath – he has worn around his wrist all his life, burst into flames, marking his skin and branding him an oath-breaker. And even though he has no shadow following him, even though he has no recollection about the oath he is supposed to have broken, Raim must run for his life.

His harrowing journey will take him through the desert all the way to the lost town of the oath-breakers where he hopes to find out a way to restore his rightful position as Khareh’s Protector and go back home.
The Oathbreaker’s Shadow is the first part in a duology that explores very interesting concepts and themes. The basic premise of the book is fabulous, the repercussions of oath-making and oath-breaking woven throughout in a way that convincingly marks all of its characters.

It is also a story that doesn’t shy away from asking the hard questions about its own premise: how fair is it to make those who make an oath bound to it, sometimes forever. How fair is it to cast out those who break a promise regardless of the reasons behind this oath-breaking?
With themes of loyalty and friendship at its core, Raim’s journey is also one that skilfully takes a look at youth and the way that naivety and dedication to one idea or sentiment can be exploited and eventually destroyed. Raim’s eagerness and innocence are put to task over and over again. In fact, the story’s focus could be summarised as: “Growing up: the dos and don’ts”. Promising your life and undying dedication at sixteen to an unworthy companion: better not.

The Oathbreaker’s Shadow also has a very rich, imagined setting. I do love the fact that all characters in this world are people of colour. Like I said before, part of it has been ostensibly inspired by Mongolian culture. Unfortunately, I don’t know enough about Mongolia to be able to tell how well developed the background is but I have heard the author speak in a panel recently about careful and respectful research and I believe this shows in the book. But your mileage may vary (I’d be interested to hear particular criticisms about this aspect of the book).

The downside of this rich setting is that a lot of the story is awkwardly bogged down by a copious amount of exposition and description about the world, its rules and cultures. That combined with how plot-driven the novel is, brought down my appreciation a notch.

Raim’s specialness also grated a bit. The love and admiration that just about everybody in this book had for him felt at odds with the character’s arc – he was not only the best warrior, the best friend, the best brother but also the Only One That Could Do Certain Things. In a similar vein, certain events that take place half-way through the novel came across as convoluted and confusing (what exactly happened that made Raim’s oath be marked on his skin. More to the point: why).

On a personal note of preference: boy, did I want a lot more from the female characters in the novel. From Raim’s super cool mentor to Wadi, the love interest. Wadi, I think got the short end of the stick as her story got folded into Raim’s in a questionable way. She obviously had importance in the great scheme of things with an independent arc that could potentially become as important as Raim’s but later events placed her in a damsel-in-distress position that feels wholly unnecessary considering that she was fully capable of kicking everybody’s ass (including Raim’s).

Ultimately The Oathbreaker’s Shadow is a mixed bag of delights for me. I will read the second book though as I must know what happens next (always a good sign).

I’ve been eagerly eyeing The Oathbreaker’s Shadow for over a year now, having heard very good things about the book (and most recently from Ana after she got to see Amy McCulloch at YA LitCon). That kind of expectation can be disastrous – luckily that was not the case with this book. Although there are certain issues, I thoroughly enjoyed The Oathbreaker’s Shadow and am hooked on the series for the next book.

I should disclose up front that this is precisely the kind of YA fantasy I’m naturally inclined to like: a non-western desert setting, fascinating magic system, and oaths and friendship and betrayal all rolled up into a delectably plot-driven story. The very concept of the book is a powerful hook in of itself – this is a world where broken promises have terrible consequences, in which oathbreakers are not only visibly identified by their scars, but by the ghostly apparitions of the oath-sworn who haunt their every move. The setup raises all kinds of interesting questions about the wisdom of promise-making, and most importantly, of consent (especially as main character Raim pays the price for a promise made at the time of his birth, which he cannot possibly remember). Plus, there’s a huge revelation about the nature of Chauk (the name given to oathbreakers) and their Haunts as the book progresses, stretching back to the history of the Darhan people and their legacy of magic. (Not to get spoilery, but it’s a very horcrux-y kind of implication, which I obviously am very much inclined to like.)

To Ana’s point, while the worldbuilding is engrossing, there is a lot of exposition, and some of it tends towards the clunky/info-dumpy, with a few more contrived reveals towards the latter portions of the book. That said, I love the world itself and the fact that it is rooted in Mongolian tradition and culture – and if I’m engrossed in the plot and world, I’m more apt to forgive copious amounts of exposition. Your mileage may vary, of course. (I would also say that I’m not as familiar with Mongolian culture and would love to hear someone else’s take on the representation here in The Oathbreaker’s Shadow – to me, the cultures in this novel are represented in a genuine and non-appropriative way.)

Finally, there are the characters. On this front, I do agree with Ana; The Oathbreaker’s Shadow is much more of a plot-driven novel and doesn’t spend as much time on developing nuance or depth for its characters. Protagonist Raim is both incredibly naive and incredibly talented – his trust and belief are endearing, but at the same time makes him seem less interesting because ultimately he’s kind of passive. Things happen to him, he reacts to them, and he naively defends his best friend even when clearly there is something else going on here (the obvious best friend/mortal enemy juxtaposition of Raim and Khareh is painfully self-evident from the opening scene between the boys). While bad things happen to Raim, sending him on this cursed mission across the desert and to a long lost city of exiles in the first place, a bunch of other things happen to Raim because he’s our special hero character. And that’s the way things go. It’s frustrating.

Also slightly disappointing is the treatment of Wadi (Raim’s love interest) and Khareh (Raim’s power hungry best friend/enemy). There’s so much potential in this novel for both characters – Wadi, because of her unique mixed background as a child of the Darhan and the Alashan, and her fierce, survival instincts; Khareh, because of his blend of power-hunger, desire for innovation, and conflicted love for his best friend. Instead of exploring these nuances, however, both Wadi and Khareh are given superficial arcs and with basic motivations. There’s room for so much more where these characters are concerned, and I’m hopeful that we’ll see them explored more thoroughly in the next book.

Because there is a next book, and I fully intend on reading it. Ultimately, The Oathbreaker’s Shadow was an entertaining YA fantasy novel, and I’m eager for more. Bring it on, The Shadow’s Curse. I’m ready.

Notable Quotes/Parts: Chapter one excerpt over at Tor.com

Book Review: The Girl Who Fell Beneath Fairyland and Led the Revels There by Catherynne M. Valente