Joint Review: The Castle Behind Thorns by Merrie Haskell 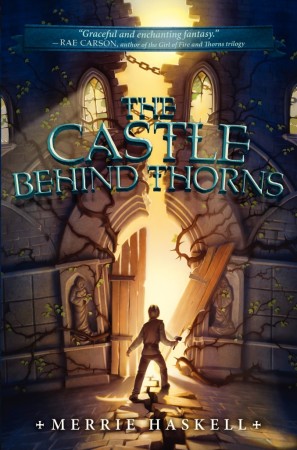 Title: The Castle Behind Thorns

When Sand wakes up alone in a long-abandoned castle, he has no idea how he got there. The stories all said the place was ruined by an earthquake, and Sand did not expect to find everything inside-from dishes to candles to apples-torn in half or slashed to bits. Nothing lives here and nothing grows, except the vicious, thorny bramble that prevents Sand from leaving. Why wasn’t this in the stories?

To survive, Sand does what he knows best-he fires up the castle’s forge to mend what he needs to live. But the things he fixes work somehow better than they ought to. Is there magic in the mending, granted by the saints who once guarded this place?

Unexpectedly, Sand finds the lost heir, Perrotte, a girl who shares the castle’s astonishing secrets and dark history. Putting together the pieces-of stone and iron, and of a broken life-is harder than Sand ever imagined, but it’s the only way to gain their freedom, even with the help of the guardian saints.

With gorgeous language and breathtaking magic, Merrie Haskell’s The Castle Behind Thorns tells of the power of memory and story, forgiveness and strength, and the true gifts of craft and imagination.

How did we get this book: Review copy via Edelweiss + bought

Why did we read this book: We have read and loved all of Merrie Haskell’s books to date. Seriously.

One day, a boy named Sand wakes up alone in a long-abandoned castle with no memory of how he got there. Living in the nearby village, he has always wondered about the mysterious place. Now, trapped inside by the vicious thorn bramble that won’t let him pass and leave, he has enough time to investigate and discover. He has to: he might be stuck there forever. First, he goes around the castle and sees that nothing lives there and nothing grows. Almost everything inside and out have been torn in half. He finds a well but he has no whole rope or bucket to get water to drink but in time, he manages to get enough water not to die of thirst. In the pantry, he finds old food just about suitable enough to eat so he won’t starve. In the crypt, he finds the preserved body of a young girl thrown out of her resting place and restores her to her rightful position. He talks to himself so he won’t feel alone. He finds a smithy and his blacksmith heart starts to sing: in time, he starts to mend and put together everything that has been torn in half.

One day, a girl named Perrote wakes up alone in a long-abandoned castle crypt. She was dead but dead she is no more. She has fuzzy memories about what happened to her, visions of refusing to drink something and burning anger. She remembers her father, the rightful owner of the castle and she knows she is his heir. She remembers a stepmother and a difficult relationship. She remembers being studious and a yearning to go to the university, an impossibility for a girl. She knows she was dead and doesn’t understand what has happened. But she wakes up to find a boy tending to her castle. They become friends and allies in an impossible situation and together, they work on mending what has been broken.

But there are things that can’t be mended.

A fantastic blend of fairytale retelling, history, magic, religion and politics, The Castle Behind Thorns is another strong novel from Merrie Haskell. I loved it for many, many reasons. First of all, the writing: very thoughtful, descriptive with that kind of quality that makes you want to turn the pages to find out what happens next.

Another thing I loved was the heady combination of history and fairytale: the story has roots in historical events and personalities from the 16th century in Brittany as well as being an interesting take on Sleeping Beauty. I also thought that the mix of religion and magic to be well done. Historical figures of Brittany (later turned Saints of the Catholic Church) make an appearance and the character’s devotion came across as genuine without being preachy. I thought really interesting to see how the idea of miracle and magic were intrinsically connected here as matter of day-to-day faith.

Finally, I appreciated very much how gender – gender roles, gender relations, gender equality – were present in the story and loved how in the end, it was all down to a parley of politics and diplomacy between several empowered female characters.

On the downside, events were perhaps too protracted especially in the first part; Perrote withholds an important plot development from Sand for no reason at all and finally, there are certain thematic aspects about the ending, especially those connected to forgiving, that came across a bit heavy-handed and preachy. That said, in the great scheme of things, those problems were minor to me and overall, I really connected with this story.

I think that I will love anything that Merrie Haskell writes.

The Castle Behind Thorns is Haskell’s third novel, and like The Princess Curse and The Handbook for Dragon Slayers, this middle grade novel blends elements of fantasy, fairy tale, and history. And, like her prior books, The Castle Behind Thorns is enchanting and deliciously readable. I wholeheartedly agree with everything that Ana has already said – I loved this book for many reasons, most of which have to do with the heartfelt characters and overall message of the book.

Sand and Perrote are wonderful protagonists at the heart of this tale of pain and forgiveness, if for different reasons. Sand is a young boy who years to follow in his father’s footsteps as a blacksmith, and who has a desire to mend sundered things. In the cursed castle behind thorns where everything has been killed and split in twain, Sand starts to understand the fierce desire of his heart as he works a kind of magic to repair all of that which has been broken. Sand’s arc is one of self-acceptance first, but it also focuses on his relationships with the people he loves – particularly his father and stepmother. I loved learning about Sand and his father, the importance of his role in the magic that befalls the castle behind thorns, and the gradual relationship of trust and care that unfolds between Sand and Perrote. Conversely, Perrote’s arc is almost entirely internalized – she awakens from death full of anguish, anger, and pain. I loved this particular twist on the Sleeping Beauty story and Perrote’s relationship with her stepmother (and how that relationship plays into the curse that befalls the castle); I also love that Perrote needs to look within in order to truly live again and be free.

On the slightly negative side, however, there isn’t actually much that really happens in this novel, and the story feels a little thin because of that (even more like a novella, as opposed to a full-length book). Along those same lines, as Ana mentions, there’s a critical part of the story in which Perrote decides to withhold some vital information from Sand for reasons that don’t entirely make sense, other than to drive some manufactured tension. The actual fairy tale retelling portion of this story, too, is very loose and liberal – and while that isn’t necessarily a bad thing (I quite like the way Haskell treats the thorn-enclosed, cursed palace), I suppose I was expecting something a little closer to the original fable. (Of course, this is a purely personal reflection on the novel and your mileage may vary.)

While The Princess Curse is my favorite Haskell novel, closely followed by The Handbook for Dragon Slayers, The Castle Behind Thorns is a beautiful, heartfelt book. Absolutely recommended.