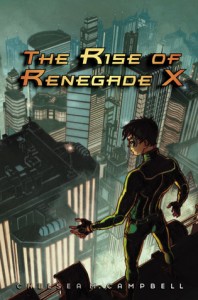 Title: The Rise of Renegade X

Stand alone or series: As far as I know, stand alone but please, please let it be the first in a series!

Sixteen-year-old Damien Locke has a plan: major in messing with people at the local supervillain university and become a professional evil genius, just like his supervillain mom. But when he discovers the shameful secret she’s been hiding all these years, that the one-night stand that spawned him was actually with a superhero, everything gets messed up. His father’s too moral for his own good, so when he finds out Damien exists, he actually wants him to come live with him and his goody-goody superhero family. Damien gets shipped off to stay with them in their suburban hellhole, and he has only six weeks to prove he’s not a hero in any way, or else he’s stuck living with them for the rest of his life, or until he turns eighteen, whichever comes first.

To get out of this mess, Damien has to survive his dad’s “flying lessons” that involve throwing him off the tallest building in the city–despite his nearly debilitating fear of heights–thwarting the eccentric teen scientist who insists she’s his sidekick, and keeping his supervillain girlfriend from finding out the truth. But when Damien uncovers a dastardly plot to turn all the superheroes into mindless zombie slaves, a plan hatched by his own mom, he discovers he cares about his new family more than he thought. Now he has to choose: go back to his life of villainy and let his family become zombies, or stand up to his mom and become a real hero.

Why did I read this book: Dudes, look at the cover and title and the blurb: it has “Ana” spelt all over it.

I have been dying to read The Rise of Renegade X ever since I first hear about it, months ago. I am a sucker for superheroes stories and “Renegade X” has a deliciously camp-sounding name that just appeals to me. On the other hand, the premise did have the potential to be problematic, depending on the execution. I braced myself and the result is: minor hiccups aside, I really enjoyed the book and I absolutely LOVED the protagonist.

Damien Locke is about to turn 16. This is a very important day for those who live in Golden City – where Supervillains and Superheroes coexist with each other and with regular folks – because on their 16th birthday, those who have the “Super” gene, get their thumbprints : a “v” for villain or a “h” for hero. Damien is the son of a Supervilainess and as such he expects to get his “v” and join Vilmore, the college for aspiring villains where he fully anticipates becoming a legend in the arts of villainy. But on the night of his birthday, as his friends and mother watch, his thumbprint forms….an “X”. Everybody talks about the infamous, rare “X” thumbprint but hardly anybody has actually seen one because the “X” signifies the unthinkable. For Damien, it means that his father can only be..GASP…a Superhero!

What could possibly bring his mother to stoop so slow and how and when? Determined to find out, Damien reads his mother’s diary (hey, he IS a villain wanna-be) and finds out that his parents had a one night-stand in a bathroom whilst fighting each other and that’s it. Using the date of the diary, Damien to identify three possible dads and to his utter disdain, his father turns out to be the Crimson Flash, one of the best, most wholesome superheroes out there, who even stars his own TV show for kids. Upon discovering that he has a son, the Crimson Flash convinces Damien’s mother to let him stay with him and his family (wife, three kids) for six weeks for a taste of the good side of the force and Damien is horrified at how easily his mother let him go (but you see, she is working on a evil plan right now). The point is, having an “X” means that Damien has a choice and his actions will determine whether he becomes a superhero or a supervilain in the end; and the funny thing is, no matter how much he wants to be a supervillain, his actions always end up being good, heroic actions, almost against his will.

Speaking of “will” or “actions”, this is ultimately the centre theme of the novel – how much do your actions count when it comes to being a supervilain or a superhero? I have to say, I am pretty happy with the way this was handled, not in a heavy way, not with a “in your face” message. Yes, good prevails in the end (despite me sort of wanting Damien to chose to be a villain but that is only because I am demented) but that does not mean that the world is black and white here. Because it isn’t. I like how for example, one of the reasons that Damien was determined to be a villain was due to his perception of fairness – from his point of view, villains are better at judging people on their own merits rather than making an assumption based on an “H” or a “V”. There is one particular sequence where this is very clear where he talks with his father about this hero who was arrested for beating up his own wife – said hero had the power of healing so he would heal his wife after each beating and so no one knew for a long time what was going on behind the scenes until he was finally arrested but even then, even with witnesses and proof, the public still had a hard time accepting and believing it because of the “H” in the guy’s thumb. Damien is very vocal about how having a “H” does not mean that you are inherently good and or having a “V” does not mean that you are evil. Unfortunately, I felt that this was somewhat downplayed by the author, I would have loved to see for example someone with a “V” who was a superhero or vice-versa because then it really meant that a person has a choice because if you REALLY think about, why only the people with an “X” have the choice? That does not make a lot of sense from where I stand. Maybe this can be further explored in the next book.

Since we are on the subject I am not too sure about the specifics of the genetic mark-ups and inheritance of power, etc. BUT, in all honestly, as fuzzy as the details of the world building are, and yes, some contrivance in the plotting did show its ugly face, in the end, I did not mind. Because I loved the main character, his voice and his arc SO very much.

The book is filled with humour and sarcasm all dished out by its protagonist and narrator. There are some really funny monologues here, like when Damien muses about which super power he will get. Like, what if he has the lame power to communicate with worms? What will he do with THAT?

(An aside: in this world, the kids’ powers start showing right before their 16th birthday. Damien is a little bit late – which reminded me quite a lot of the movie Sky High).

When he finds out that his father can fly he completely freaks out for two reasons. 1) he is afraid of heights and 2) flying is exclusively a super-hero power and if he inherits it, no way, no how, will he ever be respected amongst the villains.

But it is in dealing with his world, friends, family and being a typical teenager (with two potential love interests, getting hard-ons when in close contact with them) with atypical problems that Damien’s voice shine, baby shine. Damien is a very self-aware and attuned character who teases, pull at people’s strings and rile them up often by playing with their own preconceptions, prejudices and actions like in this quote when talking to his father:

“As I was saying before the interruption, I like villainy, and I like things how they were before you dragged me here. I want to be accepted by other supervillains. I want to go to Vilmore. I want a supervillain girlfriend. You know what they say: supervillains have more fun.” I lean in close and stage whisper, “It’s true, isn’t it? You’ve had both–you can tell me.”

As a villain wanna-be he pulls pranks and execute revenge on those who bully him but he is never cruel or entirely corrupted. Quite the contrary – his actions are very frequently less hurtful than those around him be them superheroes or supervillains. Like his father, who plays by the rules even when these rules mean being unfair. His narrative serves as a mirror to the world around him and sometimes it is an ugly world, even painful, and in this one scene when he collapses and cries, I cried too. I LOVED Damien, he is cunning, crass, sarcastic and yes, even if he doesn’t really want to, heroic (but never losing his edge).

I had loads of fun reading The Rise of Renegade X and Damien is now a favourite YA character. Here is hoping for a sequel (or two).

Notable Quotes/Parts: I love, LOVE the sequence when Sarah, Damien’s sidekick shows him his Renegade X costume. Awesome. OR when his dad takes him flying for the first time even though they don’t even KNOW if that is his power. Or the ending.

You can also read the first chapter here.

Additional Thoughts: check out the fun book trailer, made by the author:

Verdict: The Rise of Renegade X is a great superhero book. Fun, funny, full of action sequences, with a loveable protagonist with an edge. The details of the world building are slightly fuzzy but they never marred the overall enjoyment I had with this novel. More, please!

Rating: 7 Very Good, leaning towards a 8.

Reading Next: A Blue So Dark by Holly Schindler