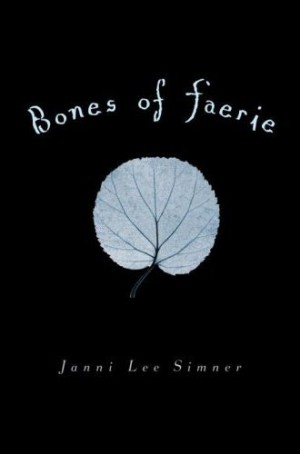 The war between humanity and Faerie devastated both sides. Or so 15-year-old Liza has been told. Nothing has been seen or heard from Faerie since, and Liza’s world bears the scars of its encounter with magic. Trees move with sinister intention, and the town Liza calls home is surrounded by a forest that threatens to harm all those who wander into it. Then Liza discovers she has the Faerie ability to see into the past, into the future, and she has no choice but to flee her town. Liza’s quest will take her into Faerie and back again, and what she finds along the way may be the key to healing both worlds.

Janni Lee Simner’s first novel for young adults is a dark fairy-tale twist on apocalyptic fiction as familiar as a nightmare, yet altogether unique.

Standalone or series: Book 1 in the Bones of Faerie trilogy

Why did I read this book: Author Janni Lee Simner contacted us about this title a few months back, and, being intrigued by the synopsis, of course I eagerly accepted a copy. (This worked out very nicely for me as the book is now over 5 years old, and thus qualified for Old School Wednesdays!)

I had a sister once.

The world has been destroyed, and civilization has fallen. Thanks to the great war between humankind and Faerie, magic has found its way into the world – transforming trees and hedges into carnivorous monsters, infecting the unborn with magical gifts that mean certain death. When her sister Rebecca is born with clear strands of faerie hair, silver eyes like moonlight and near-translucent skin, young Liza’s father leaves the babe out to die. Either the faerie folk will take her back, or animals will take care of her body, he reasons. Liza, ever curious, sneaks out to see Rebecca’s fate –

the memory of my sister’s bones, cracked and bloody in the moonlight, haunts me still

Ever since that night, even before that night, Liza’s family has been broken. Her mother is gone, her father more consumed with his anger and hate for magic – an anger he inflicts on Liza with his belt whenever she is too slow or lazy. And since that night, Liza has discovered the unthinkable; that she, too, has magic. Liza knows that whole towns have been killed because of a single person’s faerie gifts – unintentionally or by malicious intent – and she must leave.

Guided by her magic and visions of the past and present, Liza and her friend Matthew set out to find her erstwhile mother, and in the process will learn more about their world and the war that has torn both it and Faerie apart.

The first book in the trilogy of the same name, Bones of Faerie is an unexpectedly lyrical and beautifully written book – I am an immediate fan of Janni Lee Simner’s haunting prose, which captured me from the first eerie chapter. It’s a poignant, elegiac novel about a world ravaged by magic and the children who have grown up in its ruins. It is Liza’s world that is so captivating, that draws you in and defines Bones of Faerie; clearly, there aren’t enough fairy/magic apocalypses (why couldn’t this trend have taken off, one wonders?!). The few such post-magic-apocalypses that I have read – Steven R. Boyer’s Ariel & Elegy Beach, Ilona Andrews’ Kate Daniels series come immediately to mind – are wonderful in the worldbuilding department, and I’m quite fond of the juxtaposition of ruined modern civilization against faerie magic. In Bones of Faerie, cups from Disneyland and mundane items like quarters are mysterious artifacts from Before. It’s a land where corn cries and bites when humans harvest it from stalks, where ordinary trees can hunt human flesh. It’s also a world in which people are born with magic – some more obvious than others, gifted with talons, or the ability to heal, or shapeshift. Or, in Liza’s case, the ability to call and see both the future and the past.

She endangered us all – herself, me, Matthew, Mom – I realized I was shaking her only when she tried to twist free, and even then I couldn’t seem to stop.

Liza’s journey in this book is a kind of reluctant hero’s quest, with the same highs and trappings therein. She’s a compassionate heroine who years to do the right thing, who feels responsible for her sister’s death and her mother’s disappearance. Liza is also the product of a hard childhood in a changed world, the daughter of an abusive, angry father, who beats her and who hates Faerie magic in an all-consuming rage. Because of her father’s hate, Liza has a crushing fear of magic and so when she starts to have visions herself, she’s terrified and denies her abilities, even after she has run away.

One thing I love very much about this book is how Liza’s worldview shifts, not because of her own personal power and magical abilities (which she remains mistrustful of throughout), but because of the other people she meets and trusts and comes to care for in Bones of Faerie. Her neighbor and friend Matthew has been touched by magic since his family’s untimely death, and Liza discovers that he harbors his own secrets and abilities. Then there’s the precocious young Allie, a child who appoints herself as Liza’s healer – whose gift in particular is magical healing – and refuses to let her charge out of her sight, even if it means she has to leave her own family behind. (There’s also a loyal if curmudgeonly cat named Tallow (insert sniffles here) who has no magical abilities, but who I loved and have to mention.) While we, lamentably, don’t get to spend much time with this core group of characters in Bones of Faerie, they all come alive on the page and ring true – I’m excited to read more of them soon.

It flowed toward me, then stopped, as if an invisible wall rose out of the river. A sound started up: a low, frightened cry.

Finally, there are two relationships in this book that must be mentioned: the bond between Liza and her lost mother Tara, and Liza and her lost sister Rebecca. Liza has been left behind by her mother, who kept her nature and Liza’s gifts as a secret from her daughter; Liza, in turn, feels as though left her sister behind to be eaten by animals on the hillside for fear of her father’s wrath. These dynamics – the being left behind and the leaving behind – are a driving force in Bones of Faerie, and I love the pain and tenderness that defines Liza’s relationships with both Rebecca and Tara. There’s also her relationship with her father, which is a terrible thing that comes to a fitting end – though I fear for Liza and her family in future books.

The last thing I will say is perhaps disingenuous, considering this book came out first, but it’s something that kept springing to mind while reading: Bones of Faerie reminds me very much of last year’s exceptional fantasy-horror novel Sorrow’s Knot by Erin Bow, with its haunting prose and eerie, ethereal atmosphere. At the same time, this novel is also reminiscent of that book’s lack of answers and nebulous magic-working/inter-world conclusion. I’m not entirely sure why or what the significance of the ending of this particular novel is, but I cannot wait to read more in Faerie Winter.

I cannot believe I missed this book when it first came out, and urge everyone else to avoid my mistake and read

I had a sister once.

She was a beautiful baby, eyes silver as moonlight off the river at night. From the hour of her birth she was long-limbed and graceful, faerie-pale hair clear as glass from Before, so pale you could almost see through to the soft skin beneath.

My father was a sensible man. He set her out on the hillside that very night, though my mother wept and even old Jayce argued against it. “If the faerie folk want her, let them take her,” Father said. “If not the fault’s theirs for not claiming one of their own.” He left my sister, and he never looked back.

I did. I crept out before dawn to see whether the faeries had really come. They hadn’t, but some wild creature had. One glance was all I could take. I turned and ran for home, telling no one where I’d been.

We were lucky that time, I knew. I’d heard tales of a woman who bore a child with a voice high and sweet as a bird’s song—and with the sharp claws to match. No one questioned that baby’s father when he set the child out to die, far from our town, far from where his wife lay dying, her insides torn and bleeding.

Magic was never meant for our world, Father said, and of course I’d agreed, though the War had ended and the faerie folk returned to their own places before I was born. If only they’d never stirred from those places—but it was no use thinking that way.

Besides, I’d heard often enough that our town did better than most. We knew the rules. Don’t touch any stone that glows with faerie light, or that light will burn you fiercer than any fire. Don’t venture out alone into the dark, or the darkness will swallow you whole. And cast out the magic born among you, before it can turn on its parents.

Towns had died for not understanding that much. My father was a sensible man.

But the memory of my sister’s bones, cracked and bloody in the moonlight, haunts me still.