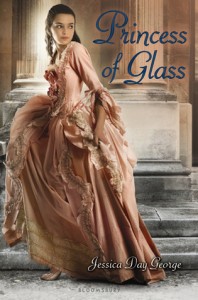 Hoping to escape the troubles in her kingdom, Princess Poppy reluctantly agrees to take part in a royal exchange program, whereby young princes and princesses travel to each other’s countries in the name of better political alliances–and potential marriages. It’s got the makings of a fairy tale–until a hapless servant named Eleanor is tricked by a vengeful fairy godmother into competing with Poppy for the eligible prince. Ballgowns, cinders, and enchanted glass slippers fly in this romantic and action-packed happily-ever-after quest from an author with a flair for embroidering tales in her own delightful way.

Stand alone or series: Book 2 in the Princess Trilogy

The twelve princesses of Westfalin have finally been freed of the curse that caused them to dance every night in the realm of the King-Under-Stone, but tensions in the neighboring kingdoms run high. Many eligible young princes fell prey trying to break the curse on the young princesses, and in order to make amends, the King sends his unmarried daughters accross the continent in a show of good will. Princess Poppy – impetuous, beautiful, and outspoken – draws Briton as her temporary new home. Here, she stays with her aunt, Lady Margaret, her uncle Lord Seadown, and becomes close friends with her cousin Marianne. The most frustrating thing Poppy has to deal with at the Briton court is the countless invitations to dances – after dancing every night for twelve years, Poppy is hardly in the mood to partake in any further such exertions.

But then, as it is wont to do, trouble rears its ugly head. Poppy finds herself embroiled in a magical scheme involving a magical godmother, a naive and vulnerable Earl’s daughter stripped of her title and possessions, and a dastardly scheme to ensnare the Dane Prince Christian. With her understanding of enchantments and her own dogged determination, Poppy decides to take on the frightening curse that threatens to destroy her friends’ and family’s happiness – but to break the enchantment, it will take every ounce of Poppy’s strength and ingenuity.

A very unique retelling of Cinderella, Princess of Glass is born of a killer premise: what would happen if Cinderella was just a pawn in the twisted machinations of an evil fairy godmother? I don’t think I’ve ever read a retelling as boldly different as this one – Cinderella (that is, Eleanora, or “Lady Ella”) is actually a bit of an unlikable brat, easily taken in by someone that very clearly does not have her best interests at heart. And why should she? What on earth does the fairy godmother in this particular fairy tale have to gain? I absolutely love this darker, more sinister twist, plus I love that our heroine is Princess Poppy, who is on the outside of the enchantment. This of course causes some strange complications, particularly in the likability scale of these different characters. For example, I loved Princess Poppy – she’s brash and confident, headstrong and no-nonsense (basically, everything I love in a heroine). She also is snappishly judgmental at times, lending an air of believability to an otherwise Beautiful Disney Princess type of character. In contrast, Eleanora/Lady Ellen is a bit of a brat – we see why she is so bitter and so easily taken in by the Corley, but that doesn’t change how distinctly unlikable she is for most of the book.

Other characters are similarly conflicted: in particular, the figure of Lord Seadown. It’s interesting that that Lord Seadown welcomes Eleanora with open arms, but only after the fact of her enchantment is known – this sits oddly as Eleanora has been working in his household for a while, and Lord Seadown knows about the circumstances that led to her family’s ruin (as he even played a hand in their demise). This, plus some of the strange comments that Poppy makes towards servants and the serving class don’t sit well in my mind – on the one hand, I appreciate the brilliant and realistic portrayal of snooty royals that seem to think servants exist for their every need and should be happy to dote on their every desire. On the other hand, the whole divide and attitude is unsettling and makes these characters hard to like or truly recommend.

From a storytelling perspective, Princess of Glass is a fairly straightforward tale, though written remarkably well. There is a handsome prince (whom of course falls in love with the tough-nosed but devastatingly beautiful Poppy) and there is a kindly older brother type character that has conveniently studied magic arts in his trips to the exotic east (yes, the words “exotic east” are used; yes, it is irritating). There’s the sweet, but less beautiful and talented cousin character in Marianne, who has her own nonthreatening love interest. On that note, the romances are strictly of the PG variety – which is fine and dandy, if it feels all a bit sanitized and shallow. Especially in contrast to the darker matters of Ella’s enchantment and the deliciously frightening figure of the Corley. I only wish that this darkness had been more fully realized to add some dimension to the novel.

My only other complaint regarding the book is that everyone seems so damned pretty and rich and…well…privileged. This is a proper, traditional Princess story, and if you’re looking for a story about beautiful people wearing beautiful clothes and living in beautiful palaces, Princess of Glass is a good bet. But for me? Well…let’s just say it’s not to my particular tastes.

Ultimately, I enjoyed Princess of Glass, but I’m still missing that perfect spellbinding moment of YES THIS IS WHAT I WANT from Jessica Day George. I’m curious and hopeful, however, to see if Princess of the Silver Woods is my silver bullet.

“Perfect,” the Corley said, lips stretched wide in a smile. She took a shallow pan of molten glass and set it in the air over her head. “Yes, everything will be perfect this time.”

She tilted the pan a little, and the syrupy stuff slithered out in a green sheet. It flowed, plae and smooth, into a basin, and showed the Corley a young girl with blue eyes and black hair under a little white cap. She was ironing a muslin gown, a grim expression on her face.

“She is beautiful,” pronounced the witch. “And clever. But almost…obsessed with her loss. Perfect. She will come to me with open arms, the lovely. And now for her prince.”

She tipped the pan a little, pouring out more liquid glass, and there he was. A tall youth with pal gold hair and deep blue eyes, riding a showy gray horse down a city street. All around him, women stopped to sigh but he rode on, oblivious.

“Handsome, yet blind to his own appeal and so much more,” the Corley purred. “And it was so easy to bring him here.”

The thick green liquid flickered and another face appeared. Black hair framed a face with porcelain skin and large violet eyes. The young girl’s beauty was only marred by the frown she wore.

Curious, the Corley watched as the frowning girl was kissed and hugged by a whole herd of other young ladies, clearly all sisters. Last of all two young men embraced her. One of the young men handed over a bag that appeared to be full of balls of yarn with a pair of sharp knitting needles sticking out of the top. The girl finally laughed, and the other young man helped her into a carriage.

“What’s this, what’s this?” The Corley clucked her tongue when the steam failed to show her any more. “Another one coming? Ah, me! Can nothing I seek come easily?

You can read more HERE.

Reading Next: Princess of the Silver Wood by Jessica Day George