Title: Half a King 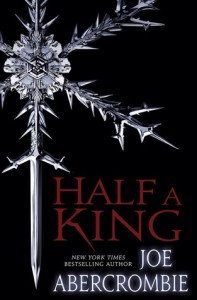 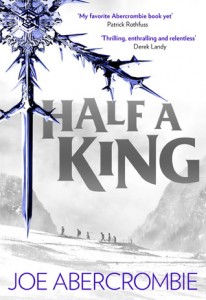 Prince Yarvi has vowed to regain a throne he never wanted. But first he must survive cruelty, chains and the bitter waters of the Shattered Sea itself. And he must do it all with only one good hand.

The deceived will become the deceiver

Born a weakling in the eyes of his father, Yarvi is alone in a world where a strong arm and a cold heart rule. He cannot grip a shield or swing an axe, so he must sharpen his mind to a deadly edge.

The betrayed will become the betrayer

Gathering a strange fellowship of the outcast and the lost, he finds they can do more to help him become the man he needs to be than any court of nobles could.

But even with loyal friends at his side, Yarvi’s path may end as it began – in twists, and traps and tragedy…

How did I get this book: Review copy from the UK publisher

Why did I read this book: Have you not heard? This is the first YA book from popular Fantasy author Joe Abercrombie, touted as the best thing since sliced bread.

“I swore an oath to avenge the death of my father. I may be half a man, but I swore a whole oath.”

The youngest son of a powerful King, Prince Yarvi was born with only one good hand into a world where being unable to hold a sword to fight as a warrior makes you a weakling. Spurned by his countrymen and his family, branded “half a man”, Yarvi spends most of his time sharpening his mind and preparing to become a Minister for a religious-like order of advisors to the King.

Before he can take up his vows, the unthinkable happens when his father and older brother are murdered leaving him the One True King. Advised to go to war against the ones believed to have killed his father, Yarvi is betrayed even before reaching the battlefield and ends up a slave on a pirate ship.

Yarvi’s journey from slavery to freedom and back home again takes up most of the narrative of Half a King. In his journey he meets a ragtag group of former slaves, forges friendships in blood and does everything to fulfill his oath to avenge the death of his father. It’s also a coming of age story: Yarvi’s fight to become a free man again, his acceptance of his inaptitude to be a king and understanding of the world he lives in and the gradual discarding of an internalised self-loathing because of his hand are all part of his journey.

Half a King is Joe Abercrombie’s first foray into YA Fantasy and my own first encounter with the author’s works. I have mixed feelings about it. On the one hand, this is an easy-read, fun, adventure story. There are moments of funny humour, snappy dialogue and an ending that was genuinely surprising in different ways (more on that in a moment).

On the other hand, it is also trope-heavy as the vast majority of the book is exactly what you would expect from a revenge fantasy. Think Ben-Hur meets Count of Mount Cristo and bingo, you have it. I felt a lot of to be simplistic and superficial in exploring its motifs and characters. Those were especially true when it comes to slavery for example, or the relationships between Yarvi and his friends – their loyalty and sudden dedication to each other are very underdeveloped. In fact, I am sure we are supposed to accept that loyalty and friendship because this is the “way things tend to happen in stories of that kind” rather than because we see them actually developed in the book.

I have similar feelings when it comes to the topic of gender within the story. The author does attempt to do something very, very interesting with regards to gender by reversing traditional gender roles when it comes to the Gods and Goddesses in this Viking-like world. So, you have a GOD of Peace and a GODDESS of War. But it’s disappointing that this is never taken further to the most logical progression which would have been to have female soldiers and warriors in abundance in this world. Female characters – although in fairness and thankfully, quite powerful on their own – are almost always stuck to having power within the household/kingdom sphere with the odd female pirate (villain) out there. In the end, another character – female – swears a similar oath to Yarvi’s and I’d very much like to see that taken up with the same seriousness (perhaps that is exactly what book 2 is about. One can hope).

All that said, the last quarter of the novel was much more interesting. There is an element of subverting the expectations that the familiarity of the earlier parts had built up. Mind you, this is not because of a couple of fun twists but mostly because of how characters’ motivations and actions play out. I actually loved that the stimuli for actions are financial changes brought forth by a major female character. But I am not convinced that the last few pages entirely make up for the fact that the first three-quarters are so utterly familiar and under-developed. Your mileage may vary.

One last note: a great deal of hype has been created around this release. Blurbs from every single Big Name in Fantasy (although weirdly not in YA Fantasy as apart from Rick Riordan, all the other blurbs are by adult fantasists) and exceedingly positive reviews make it sound as though this is the best thing since sliced bread. Well, it’s not. But if you half (haha) your expectations and expect to pass a few entertaining hours, it will be fine.

Notable Quotes/Parts: You can read an excerpt of the novel here.