We continue our ongoing new series “SFF in Conversation” with a guest post from Jim C Hines talking about Invisible. Invisible is an ebook anthology of 13 personal, powerful guest posts originally published on his blog which also includes bonus material from Alex Dally MacFarlane, Gabriel Cuellar, Nonny Blackthorne, and Ithiliana. 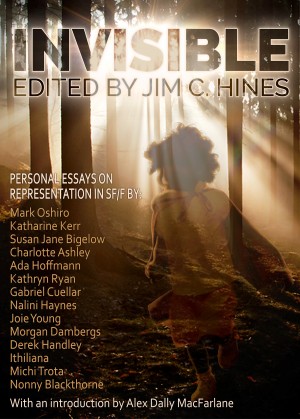 Please give it up for Jim, everyone!

The following is based on a keynote address I gave in April 2014 at the Pikes Peak Writers Workshop.

When I started actively working to become an author, I had a skewed idea about which stories mattered. I thought good stories needed to be Deep and Serious and Powerful … basically, for several years, my goal was to write something that made my writing group cry.

Since then, I’ve learned that all of our stories matter. There’s a lot of judgment and disdain out there for stories and genres people consider lesser. Fantasy. Romance. Fanfiction. One of my early reviews described my goblin books as “escapist fluff.”

I think “escapist” was supposed to be a bad thing, but tell that to the twelve-year-old girl in the hospital for chemo. Tell it to the nine-year-old boy getting his ass kicked at school every day for being “different.” Tell it to me on the days the Brain Weasels of Depression start to win, and I reach the point I just can’t deal with anything for a while. Sometimes we need the escape.

Books were always an escape for me, growing up. I would come home from school, where being a skinny, nearsighted, academically bright but socially clumsy geek with a speech defect meant trying to make it through the day without getting locked in my own locker again. And I could sit down with books that told me being smart was a strength. Where being an outcast made you special. These books not only helped me to escape the dystopia of junior high school, they gave me hope. They showed me possibilities. Story after story presented people like me becoming heroes…

It was years before I started to realize not everyone was as fortunate as I was.

I recently ran a series of guest posts on my blog. The first was by the Hugo-nominated Mark Oshiro. He talked about how he and his brother finally found a character like them on TV: Speedy Gonzalez. He notes, “I, too, believed that the horrifically racist stereotype that was Speedy Gonzales was the quintessential representation for me when I was a kid.”

Because it was pretty much the only representation. Portrayals of straight white guys were endless, but for a kid growing up with darker skin and black hair? His choice was a racist caricature … or nothing.

I’ve been trying to talk more—and more importantly, to listen more—about representation in fiction. To people who are tired of never finding themselves in stories, or of seeing themselves only portrayed as villains.

I ended up bundling those guest posts about representation into Invisible, an ebook of 13 personal, powerful, at times angry stories that talk about why seeing ourselves in fiction—and not seeing ourselves—matters.

Nonny Blackthorne wrote about how finally finding queer characters in science fiction and fantasy literally saved her life. They told her she wasn’t alone. They helped her understand and accept who she was.

People have been pointing this stuff out for a long time, and asking authors to consider writing more inclusive stories. To think consciously and deliberately about characters instead of simply defaulting to the same old bland, monochromatic cast. These calls are generally met with a lot of pushback:

•“If those people want to see themselves in fiction, why don’t they write it?”

•“I want to write stories, not preach messages.”

•“I’m scared of getting it wrong!”

I care about writing good stories too. And part of what makes a good story is that it’s honest. I want the characters to feel true. I want the world to feel like a genuine reflection of ours. Even the most distant fantasy worlds or science fictional universes have a connection to our own. That’s how we relate to them.

And when I read stories with such a narrow range of characters, I wonder what world these authors see. Is it that they don’t recognize the variety of people and experiences around them, or they simply don’t feel that those people are worthy of inclusion in their stories? I’m sorry, but when your characters all look and act and talk alike, when they’re all cut from similar molds, I get bored. And a boring story isn’t a good story.

It’s not about quotas or checklists. It’s about recognizing our own assumptions and defaults. For instance, I’ve been asked multiple times why I made a heavyset Indian woman a primary character in my current series. I was never asked why I made the protagonist a straight white man.

Authors need to be able to answer both questions. And if my answer to the second question is, “I didn’t really think about it,” then I need to do better.

That means looking around. Listening to people. Moving beyond stereotypes and assumptions, and writing well-rounded characters.

People ask, “Why don’t they write it?” Well, “they” have been writing their stories for ages. And those stories get rejected by agents and editors who don’t think people will read them. They get tucked away in specialized subgenres in the bookstores. They get sent back with requests to make the gay characters straight. They get overlooked by reviewers.

I came across a post online about the new Star Trek films. This individual had gender-flipped the bridge crew of the Enterprise. Lieutenant Uhura was now a black man, and the rest of the crew was female. I smiled and nodded, because it was an effective way to make a point.

The movies make a point too. They’re making the point that an almost all-male crew is “normal.” Too many of us have unthinkingly absorbed and accepted these messages. We’ve gone on to reinforce them in our own writing and reading.

You say you don’t want to write Message Fiction? All fiction has a message. Whether or not we notice those messages depends in part on the skill of the writer. It also depends on whether or not it’s a message we’re so used to that we don’t see it anymore.

I did a series of photos back in 2012 where I tried to pose like the women on various fantasy book covers. It was … interesting. It was funny. It was at times painful. But I hope that it also helped people to see a message we’d gotten so used to that many of us didn’t even see it anymore. Another cover heroine in tight leather with spinal damage and physics-defying boobs? Meh. A middle aged bald dude posing the same way? That, we notice.

These things matter. Whoopi Goldberg has talked about her decision to take a role on Star Trek, and how that began when she was a child, when she saw Lieutenant Uhura on the original series.

“I went screaming through the house, ‘Come here, mum, everybody, come quick, come quick, there’s a black lady on television and she ain’t no maid!’ I knew right then and there I could be anything I wanted to be.”

I want everyone to be able to find their stories, and to see possibilities. I want them to see hope. I want us all to have stories that acknowledge our existence and celebrate the fact that this world is amazing, full of so many people and places and ideas.

Invisible is on sale for $2.99 and all proceeds will go to the Carl Brandon Society for Con or Bust. Go here to read more about it.