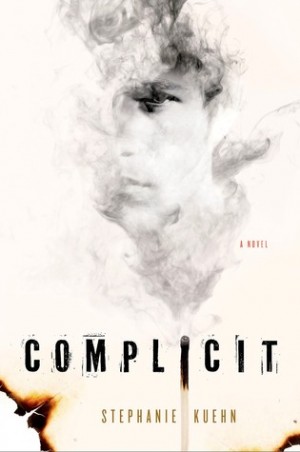 Two years ago, sixteen-year-old Jamie Henry breathed a sigh of relief when a judge sentenced his older sister to juvenile detention for burning down their neighbor’s fancy horse barn. The whole town did. Because Crazy Cate Henry used to be a nice girl. Until she did a lot of bad things. Like drinking. And stealing. And lying. Like playing weird mind games in the woods with other children. Like making sure she always got her way. Or else.

But today Cate got out. And now she’s coming back for Jamie.

Because more than anything, Cate Henry needs her little brother to know the truth about their past. A truth she’s kept hidden for years. A truth she’s not supposed to tell.

Why did I read this book: I was highly impressed with the author’s debut Charm and Strange which I read and reviewed last year. I knew I’d be reading her next effort as soon as it was out.

It starts with a phone call from an unknown caller at 3:29 in the morning. Jamie answers his phone but he hears nothing on the other side. He is unsettled but goes back to bed.

Two years ago, Jamie’s sister Cate was sentenced to juvenile detention for burning down a neighbour’s horse barn and accidentally hurting a high school friend. Cate had always been a good girl growing up but things started changing leading up to her arrest: she became restless and moody, started to take drugs, to act up, to lie and to steal. Above all, she became scary.

Jamie wonders if their shared, traumatic childhood – their mother killed in an armed robbery gone wrong, in front of their very eyes when they were little – has finally caught up to Cate. Now that Jamie is finally feeling better, living a normal life after years of therapy and treatment maybe it’s time for Cate to finally go crazy.

Or maybe, maybe it’s not like that at all. Maybe the truth is something else altogether, hidden in lost memories, unspoken truths, slanted self-image and unreliable narratives.

Much like Stephanie Khuen’s excellent first book Charm and Strange, Complicit handles a thematic core that addresses trauma and memory with a narrative mode that is as important as its themes. Like its predecessor, the narrative and its progression brilliantly mimics the character’s psychological state. The difference between the two books lies with the narrator and his role in the central drama that slowly unfolds (this is perhaps too close to spoiler territory but without going too much into detail, I hope).

In Complicit we are experiencing this story from the perspective of someone with a shaken, distorted, faulty memory and sense of self. That distortion – what causes it and how, is exactly what makes the story. From the beginning we are presented with a plethora of “facts” from Jamie’s mouth: he is a good boy. He behaves. He is a good student, a good son, a good potential boyfriend. He suffers memory loss and black-outs because of his traumatic childhood when his mother was murdered in front of his eyes. In contrast, his sister is dangerous. She is going crazy. She is a bad girl. She is scary.

But as the story moves onwards, there are cracks in this story. Through the good boy narrative, we get glimpses of things not so wholesome: there is a good deal of misogyny when talking about girls and about his own sister; there is a great amount of anger. And what exactly happens when Jamie blacks out? Is this unreliability on purpose, a careful constructed web of lies?

Soon, the reader starts to wonder about this and more, about who and what is really broken. That wondering leads us through a riveting psychological thriller that is engaging and thoughtful, all the way down to an ending that is as scary and heart-breaking as it is impacting.

“She got out early,” he says, and I can sense he feels just as helpless as I do. “Two weeks ago. Good behavior or overcrowding or something.”

“Why didn’t someone tell us?”

“Cate’s nineteen now. No one has to tell us anything.”

Angie sweeps back in. She’s preceded by the smell of gardenias, which is the perfume she always wears and the one that always gives me a headache. She’s waving a pair of my dumb gloves around, but there’s a look that passes between her and Malcolm—one forged from wide eyes and knowing nods. It’s the one they share when they think I can’t handle things and the one that means they’re keeping secrets. I feel the urge to call them on it, to demand an answer, but I don’t want to upset them, either. Not upsetting people is sort of the modus operandi around here.

After Cate, it’s a welcome change.

“Far away,” Angie says. She picks up my left hand and forces on the first leather shearling-lined glove. My fingers bend every which way with the effort. It’s sort of sickening to watch, but I let her do it. Everyone says heat is good for circulation, only I’ve never been able to tell that it helps any.

“Far away,” I echo, as Angie straightens up and brushes hair from my eyes. It used to be blond, my hair, but now it’s aged into the same light brown as hers. Like a chameleon’s trick—familial camouflage.

“She’s got no reason to come back here, James. None. We’ve seen the last of her.”

I nod again. This is a sentiment I’d like to believe, but I don’t. There are things I know about my sister that no one else does. Bad things. Things I can’t say. Not without hurting Angie and Malcolm or causing them grief, and I don’t have it in me to do that. So instead, I lift my chin and smile warmly at my adoptive parents. This is good, reassuring. My actions send the message that I’m fine, totally fine.

I’m not fine, of course. Not even close.

But like I said, it’s so rarely the thought that counts.

Reading Next: The Likeness by Tana French