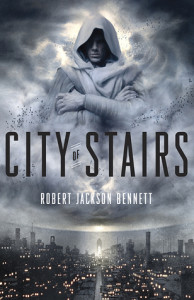 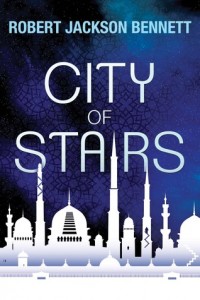 Years ago, the city of Bulikov wielded the powers of the Gods to conquer the world. But after its divine protectors were mysteriously killed, the conqueror has become the conquered; the city’s proud history has been erased and censored, progress has left it behind, and it is just another colonial outpost of the world’s new geopolitical power. Into this musty, backward city steps Shara Divani. Officially, the quiet mousy woman is just another lowly diplomat sent by Bulikov’s oppressors. Unofficially, Shara is one of her country’s most accomplished spymasters-dispatched to investigate the brutal murder of a seemingly harmless historian. As Shara pursues the mystery through the ever-shifting physical and political geography of the city, she begins to suspect that the beings who once protected Bulikov may not be as dead as they seem-and that her own abilities might be touched by the divine as well.

Stand alone or series: Stand alone but there is a sequel in the works.

Why did I read this book: I have a thing for stories about dead gods and what happens to the people when their gods are dead or gone. Plus, the rave reviews from trusted sources and since I have always wanted to read a Robert Jackson Bennett novel, this seemed like the perfect place to start.

Once upon a time. In illo tempore.

Imagine Bulikov, a city that was once a commanding stronghold of Gods and Goddess, where impossibly tall buildings shone in the skyline, from where a people ruled the world it had conquered by the grace of those Divinities.

Imagine that city now, where events in living memory have transformed its very core, its once powerful people subjugated by one of its very own enslaved colonies, forbidden to study and learn their own history, their Divinities killed and those beautiful buildings literally disappeared before their very eyes.

Imagine Saypur, that risen colony, once a poverty-stricken backwater, denied power, agency and the grace of gods, now a geopolitical power with the necessary technology to take over the world. The once conquered has become the conqueror and the “once upon a time” becomes “what happens next.”
Imagine a narrative that takes exactly that revolution, examines it from the bottom up, placing the people it affects, on both sides, at centre stage. Imagine a narrative that says not only that the “now” is being written in front of our very eyes but also that the once upon a time was not actually, a perfect fairytale with a happily ever after.

That imagined world is the setting for City of Stairs: a book that takes complex themes like colonialism, oppression, religion and systems of belief and weaves them into a story that is part fantasy noir, part murder investigation, peppered with humour and tragedy, hope and adventure, magic and twists, with female characters of all ages who lead the story and develop strong bonds of friendship with each other, in which most characters are people of colour, and where cultural, social and religious history are at centre stage and holy shit, was this book good.
It ostensibly starts as a murder investigation when Shara Divani, a super-spy, diplomat and amateur historian from Saypur arrives in Bulikov and is plonked – along with the reader – into this multi-layered world of hidden truths, twisted narratives and supposedly dead divinities.

And it feels like it was almost inevitable that I’d fall in love with this book and especially with Shara, because how could I not – hello, super-spy, diplomat, amateur historian – given the depth and intricacy of the narrative built around her? Shara is truly and really from Saypur and as such is a person with her idiosyncrasies and someone who isn’t completely immune to the beliefs of her own people. But she is also someone who has been away, who has visited other places and learned other truths– torn between what she has always known, what she has been told and what she has effectively learned in the years since she has been exiled from her own home for political reasons.

Truth and knowledge will set you free, Shara’s journey tells us and in a book that shows the way that censorship, forgotten history and prohibited knowledge impact the very fabric of reality and the lives of the people who live in Bulikov. And because nothing in this world comes without consequences anything that affects Bulikov also affects Saypur because of course it does, since this a multifaceted, realistic, intricate co-dependent system.

City of Stairs is just shy of utter perfection for two reasons. The second half comes with several moments of clunky exposition in marked contrast with the sophisticated first half of the novel. It actually dangerously veers toward “idiot lecture” i.e. let’s make sure our readers understand exactly what we are doing here.

The other reason regards Sigrud, a secondary character who is the stereotypical Brawny Invincible Tortured Hero With a Hidden Past that is almost out of place with his Aragorn-like storyline in the middle of what is an otherwise refreshing take on Fantasy. Thankfully, he never completely overshadows Shara’s spotlight.

Finally, it behoves me to say that when it comes to the examination of the relationship between faith and power City of Stairs is, thematically speaking, cousin to other recent books that I have also loved: N.K. Jemisin’s The Hundred Thousand Kingdoms and Max Gladstone’s Three Parts Dead. All three are highly recommended and City of Stairs, in spite of the criticisms above, is a Notable Read 2014 and a possible contender for a top 10 spot.

She watches the crumbling arches, the leaning, bulky vaults, the tattered spires and the winding streets. She watches the faded tracery on the building facades, the patchwork of tiles on the sagging domes, the soot-stained lunettes, and the warped, cracked windows. She watches the people—short, rag-wrapped, malnourished—stumbling through oblong portals and porticoes, beggars in a city of spectral wonders. She sees everything she expected to see, yet all these dreary ruins set her mind alight, wondering what they could have been like seventy, eighty, ninety years ago.

Bulikov. City of Walls. Most Holy Mount. Seat of the World. The City of Stairs.

She’d never figured that last one out. Walls and mounts and seats of the world—that’s something to brag about. But stairs? Why stairs?

Yet now Ashara—or just Shara, usually—finally sees. The stairs lead everywhere, nowhere: there are huge mountains of stairs, sud­denly rising out of the curb to slash up the hillsides; then there will be sets of uneven stairs that wind down the slope like trickling creeks; and sometimes the stairs materialize before you like falls on whitewa­ter rapids, and you see a huge vista crack open mere yards ahead.…

The name must be a new one. This could have only happened after the War. When everything… broke.

She wonders where the stairs went before the War. Not to where they go now, that’s for sure. She struggles with the reality of where she is, of how she came here, of how this could possibly really be hap­pening.…

Rating: 8 – Excellent and leaning toward 9

Reading Next: The Parable of the Sower by Octavia E Butler

Book Review: The Space Between Trees by Katie Williams