Today we are delighted to have middle grade author M.P. Kozlowsky over as our guest for the day to talk about the origins of his new book, . We loved Kozlowsky’s first book, Juniper Berry, so were very excited to learn of his newest novel for young readers.

Please give it up for M.P. Kozlowsky, everyone!

I must have been 6 or 7 years old. I had a Fisher-Price tape recorder of the ugliest mix of brown colors that I would place in front of the TV so that I could record music off of MTV and VH1 for hours a day, which my brother and I would later turn into our very own radio station that nobody listened to. I don’t remember recording many conversations with that brown box, if at all, and my grandfather had told me dozens upon dozens of stories in those few early years, but for some reason on this day, for the first time ever, I decided to record him.

My grandfather, much like the elder Vincent in the book, was a mysterious man. A kind man, a quiet man. A painter, a singer, but, most importantly for me, a storyteller. Whenever given the opportunity, he would capture a child’s imagination with a wide array of tales which were told with such passion and familiarity that most listeners walked away wondering if these stories were true or not. In Italy, where he grew up, as well as in the Bronx, where he raised his family, he would have the neighborhood children gather around to hear these tales, sitting on stoops for hours on end.

And now I was one of these boys. For whatever fortuitous reason, that afternoon in his apartment I recorded his story – I assume it was because I enjoyed them so much and wished to listen to them over and over again; but why these tales, why this day? Whenever he told his stories, he always inserted my name into them, so that it was like I was living in these magical lands, encountering these strange creatures, a boy of immeasurable bravery. Most of the stories were fairy tales of the Grimm variety – very dark, very menacing – and I was enthralled throughout. For almost an hour of recorded material, my voice only sparingly interrupts: “Who said that?” “What happened next?”

When the story was over, I labeled the cassette – side 1: The Giant, side 2: The Head. Over the years, the tape was passed among my four brothers like our favorite comic books or music. We all memorized the tales and eventually the tape was no longer necessary because we could recite them by heart. It sat in a drawer for some time and I am astonished that it wasn’t recorded over – everything in our house was recorded over repeatedly.

Some years after my grandfather’s death, in my late teens, I came across it once more and, listening to it for the first time in almost a decade, knew the tape needed to be preserved. I had the tales transferred to a CD and then, eventually, uploaded online, where I would listen to them time and again, mesmerized once more, even as I strained to understand the words through my grandfather’s thick accent that had, over the years, evolved into something like a foreign language. But it was several more years after that I realized I could use the contents of that tape as inspiration for a story. I felt compelled to. I felt I absolutely needed to. The tales required a lot of reworking – most of the bizarre and outrageous side 2 being abandoned in the process, but I believe I captured the magic of them, the magic I felt as a child – the giant, the dragon, the witch, the horse, the lion; they were all in there.

My grandfather told me countless other tales, but I only recorded these two. The others, unfortunately, faded from my memory. I am left with scraps. There are other stories I cling to, stories about his actual past, many just as fantastical as his fairy tales – to this day I’m still not exactly sure where his scar came from. I’m not sure about any of it; what’s true and what’s not. But does it really matter? My grandfather is there in every one of them. He is in his tales. He is in this book. He lives still.

M. P. Kozlowsky lives in New York City with his wife and two daughters. He is the author of Juniper Berry and The Dyerville Tales, books for readers of all ages. 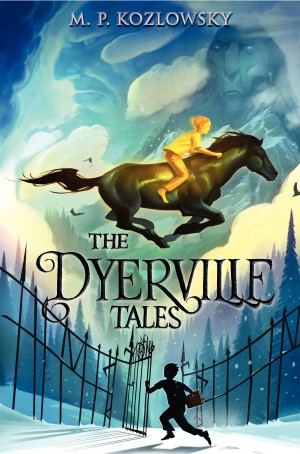 Neil Gaiman’s Coraline meets Anne Ursu’s Breadcrumbs in M. P. Kozlowsky’s The Dyerville Tales, a powerfully imaginative middle-grade novel that blurs the line between fantasy and reality, from the author of Juniper Berry.

Vince Elgin is an orphan, having lost his mother and father in a fire when he was young. With only a senile grandfather he barely knows to call family, Vince was interned in a group home, dreaming that his father, whose body was never found, might one day return for him. When a letter arrives telling Vince his grandfather has passed away, he is convinced that if his father is still alive, he’ll find him at the funeral. He strikes out for the small town of Dyerville carrying only one thing with him: his grandfather’s journal. The journal tells a fantastical story of witches and giants and magic, one that can’t be true. But as Vince reads on, he finds that his very real adventure may have more in common with his grandfather’s than he ever could have known.

Its unique voice and ability to combine creepiness with great story and character development make The Dyerville Tales a real standout middle-grade novel.

Want more Dyerville? Check out the other stops on the official blog tour, below!