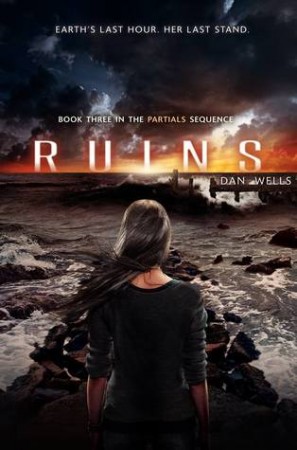 Kira, Samm, and Marcus fight to prevent a final war between Partials and humans in the gripping final installment in the Partials Sequence, a series that combines the thrilling action of The Hunger Games with the provocative themes of Blade Runner and The Stand.

There is no avoiding it—the war to decide the fate of both humans and Partials is at hand. Both sides hold in their possession a weapon that could destroy the other, and Kira Walker has precious little time to prevent that from happening. She has one chance to save both species and the world with them, but it will only come at great personal cost.

Stand alone or series: Book 3 in the Partials trilogy

Why did I read this book: I’m a big fan of Dan Wells’ writing, and I’ve loved the first two books in the trilogy. Of course I was going to read book 3!

The world is about to end again.

The war between humans and their genetically engineered and produced servants, the Partials, upended life across the planet. Resentful of their enslavement, the Partials rose up against their human overlords, and with the help of a devastating engineered plague – the RM virus – over 99% of humanity fell to the illness. The legacy of RM would only be fully realized years later – when the last surviving humans tried to procreate, and found that the virus kills all newborns without discrimination. While humans always blamed the Partials for engineering RM and for the near-total annihilation of the human race, Kira Walker discovered the truth in her journey from Long Island, across the wasteland that used to be the American Midwest, to an impossible group of survivors in Denver, Colorado. The Partials carry and spread RM, true, but they also hold the cure in a naturally occurring pheromone in every Partial’s physiology. The genesis of the disease and its cure lies with the corporation that created the Partials: ParaGen, a corporation in which Kira’s own father and surrogate mother were key figures, and central players in executing the Partial war (aka, members of the ParaGen “Trust”).

ParaGen’s legacy didn’t end with RM, though – the Partials also face a plague that will inevitably lead to the death of every single member of their race. Every Partial faces an Expiration Date – a fixed date in the future, in which a Partial’s body decays at an accelerated rate.

Caught in the middle of an impossible situation that could mean the total extinction of both humans and partials, Kira is desperate to find a way to stop Expiration, and recreate the RM virus cure. Even worse is the fact that even if she can figure out how to save the world from a plague-based extinction event, there’s the problem that Humanity and Partials still hate and deeply distrust each other. With the war raging on, and weapons of mass destruction at play, Kira and her allies must work fast before all hope is lost.

The third and final volume of the Partials sequence by Dan Wells, Ruins is a fitting sendoff to a trilogy with the highest of stakes. This is a grave story about humankind’s resistance to change, its hubris and its ultimate demise. The entire trilogy paints a grim history of the world, with the sins of prior generations damning any possible future for the younger survivors – even if those prior generations had the best of intentions, they have most assuredly damned the future. The question at the core of this trilogy is an oldie, but a goodie: will humanity learn from the mistakes of the past and end the cycle of hate and death?

If Kira Walker has anything to say about it, then the answer is a resounding yes. Something that I admire very much about this series, and about Ruins in particular, is how Dan Wells accomplishes what post-apocalyptic books are supposed to do (almost all of them try to do this, but Wells actually pulls it off with conviction). In the YA dystopia, the old order is corrupt and wrong, and it is up to the younger generation to overthrow the old and start anew. In Ruins and in the Partials sequence overall, this is incredibly true – thanks to the Trust and the leaders of the surviving enclaves of humankind and Partialkind, civilization has been obliterated and everyone will die. The only hope at life lies with the impassioned Kira, who learns over the course of these books (and especially in this last book) that it is not enough to merely survive. It’s not enough that she possesses the answers that can save lives, because if she has to do terrible things and compromise her own humanity in order to accomplish that survival, perhaps humanity doesn’t deserve to live. As Kira discovers in this book after realizing the full implications of what ParaGen has done – what all of the leaders of this world have done – if she is to save humanity, there must be something worth saving.

To that end, I very much liked the way that Dan Wells ties the cause of the apocalypse and impending extinction of intelligent life together. As Kira discovers, just as RM and the Expiration Date are intertwined, the cure for both is also inextricably linked. This is a revelation that has been building up over the course of the trilogy, and when it finally dawns upon Kira (and readers!) in Ruins, it’s a fantastic EUREKA moment. (At least, it was in this reader’s opinion.) Which brings me to yet another thing that I think this series does phenomenally well – the line drawn between knowledge and action. That is, discovering a cure is one thing, but actual implementation of that cure is quite another. In Ruins,

What else worked? I felt like I understood character motivations a little more in this last book beyond just Kira or Samm (who are relatively straightforward and dedicated characters). I liked learning a little more about Heron, the Partial espionage model, and getting to spend more time with Kira’s “sister” Ariel as well as her ex-boyfriend Marcus (who is sweet and hilarious) as they frantically try to stop two very deadly weapons that threaten to exterminate anyone’s chances for survival. I also liked that things aren’t easy in this last book. Some very bad things happen, and I think Wells lives up to the promise he makes in the book’s dedication: “Sorry. Life’s like that sometimes.” For all the bad things that happen in this book, the grimness is tempered with hope. Even if the bomb goes off, there’s still hope for life and love and living as opposed to just surviving – I, for one, appreciate that hopeful sentiment to end the series.

For the things that did work, however, there were also plenty of issues with this last book. Most frustrating was the plotting and pacing of this last book, which is all over the map – literally. This series as a whole alternates between breakneck action and prolonged periods of inaction as our protagonists journey across the ruins of civilization, but in Ruins the periods of journeying are more pronounced than in other books, as are the scenes of action without actual purpose. Following four different characters on their separate treks, I also found very odd the fact that a months-long journey in book 2 could be so quickly accomplished here in book 3. Another thing I personally did not care for is the last-minute love triangle in Ruins between Kira, Marcus, and Samm (which felt tacked on, as though someone told Wells he had to hit a love triangle quota before the series ended). That said, I’m happy that this aspect of the book wasn’t needlessly drawn out and that Kira ultimately ends up with the person who makes sense for her, given everything she’s accomplished and experienced over the course of her journey.

Other random things that didn’t quite play out so well: the identity of the big red abominable snowman (as I came to think of the great talking shaggy creature who forewarns everyone that WINTER IS COMING), the whereabouts and destiny of Kira’s erstwhile father, Nandita’s research and her motivations and storyline (which never had the depth and time they deserved). Random talking dogs and panther pets are random.

At the end of the very long road across ruined cities and toxic marshlands, evading monsters both human and genetically engineered, Ruins and the Partials sequence as a whole is a triumphant success. I’ll miss Kira Walker, Samm, and the gang, very much – but I’ll rest assured knowing that their future is one filled with the promise of hope.

Notable Quotes/Parts: You can read the first 90 pages of Ruins online HERE!