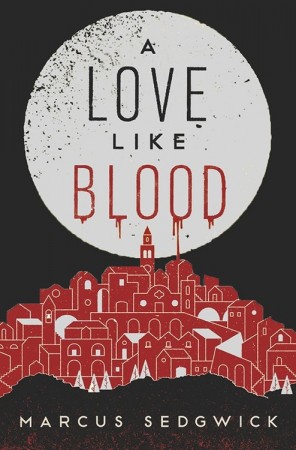 ‘I’ve chased him for over twenty years, and across countless miles, and though often I was running, there have been many times when I could do nothing but sit and wait. Now I am only desperate for it to be finished.’

In 1944, just days after the liberation of Paris, Charles Jackson sees something horrific: a man, apparently drinking the blood of a murdered woman. Terrified, he does nothing, telling himself afterwards that worse things happen in wars.

Seven years later he returns to the city – and sees the same man dining in the company of a fascinating young woman. When they leave the restaurant, Charles decides to follow…

A Love Like Blood is a dark, compelling thriller about how a man’s life can change in a moment; about where the desire for truth – and for revenge – can lead; about love and fear and hatred. And it is also about the question of blood.

Why did I read this book: I am a huge fan of this author and I will read anything he writes, basically.

A Love Like Blood is Marcus Sedgwick’s first foray into adult fiction. Having loved many of his previous books, I was eager to see how this transition would go.

It’s 1968 and Charles Jackson is waiting. He is waiting for the man he has chased for over twenty years and whose fate finally rests within his grasp. While he waits, he remembers his journey. A journey that started in 1944 in a recently liberated Paris when, as a young captain in the Royal Army Medical Corps, Charles witnesses something horrific: a man, apparently drinking the blood of a young woman.

For the next few years, Charles is haunted by that one image and by his guilty over not doing anything to save the woman. Then one day, he sees the man again, dining in the company of another young woman, someone that will become a part of Charles’ life in more ways than he could imagine.

A Love Like Blood is a take on the vampire mythos, a taut psychological thriller. Like everything written by Marcus Sedgwick, the story is expertly told: building up from one particularly disturbing event witnessed all those years before, the character’s obsession with it becomes the central part of the narrative, acting as motivator but also as a smokescreen.

As the years go by and Charles becomes embroiled in what seems to be a conspiracy (or is it?), blood becomes everything to him. Everything goes back to that one event in 1944 but especially to that one aspect connected to it that keeps coming back: the sight of blood. The blood that feeds the mysterious man, the blood that becomes part of Charles’ life, the blood that he sees everywhere. It is a recurring theme of the book, something that interests a lot of the characters in different ways. Its presence is a matter of history, of medicine, of research, of life and of course, of death.

In many ways, this book is an incredible exercise on narrative unreliability. Whatever Charles is telling the reader is coloured not only by his perception but also by the things he tells himself. As such, elemental to this story is the main character’s relationship with memory:

If that sounds odd , believe only that I have often pondered the nature of memory ; the way in which we can distort our memories over time, so that as the years pass something is exaggerated, added to, subtracted from, or otherwise twisted to the point where it no longer has much basis in reality . Sometimes, perhaps, these changes are not significant, but at other times a whole memory can be effectively destroyed, reduced to nothing – or created from nothing.

Is Charles a hero determined to avenge the deaths of women? Is the man he is chasing a real vampire? Is the blood that flows through his life something to be feared? Or something to be cherished?

The answers when they come, cement this book as an incredibly harrowing, disturbing horror story that reminded me of Edgar Alan Poe’s effective tales.

On the down side, two points: for a book that is only 320 pages, it felt like the story was going on for too long, needlessly repeating many of the same points.

I also couldn’t help but to think of the Women in Refrigerators Syndrome. Although in fairness, this story is told by an unreliable character and many male characters do encounter bloody, horrific endings, the blunt of it all is suffered by female characters many of whom are denied even speaking parts. This is something that troubles me even as I appreciate the fact that this is a horror story and all of this is part of said horror.Your mileage may vary.

In the end this might not be one of my favourite books from this author, but it’s still a bloody good horror story.

I’ve chased him for over twenty years, and across countless miles, and though often I was running, there have been many times when I could do nothing but sit and wait. Now I am only desperate for it to be finished.

I am acutely aware of every minute detail of the moment. The grime on my face and neck, the smell of the still-warm grass around me, the throb I still get sometimes from my ruined hand, the weight of the knife in my right pocket.

Many times, over the years, I was lost, alone, unsure how to proceed, not knowing where to turn next , but now I know, and I’m waiting for one thing only: for the right moment, so I can do what I’m going to do, unseen.

Despite my concentration on the few lights in the village, on the sounds around me, on what I will do, I cannot help but remember some of the journey.

This story begins a long time ago; twenty years ago at least; maybe more somehow, I see that now. Yet in another, fuller,sense, my story begins centuries, millennia ago, for this is a story that must go back to the moment when blood flowed from some ancestor of ours; hot, bright and red. For me, however, it began in August of 1944, in Paris.

Reading Next: The Goblin Emperor by Katherine Addison