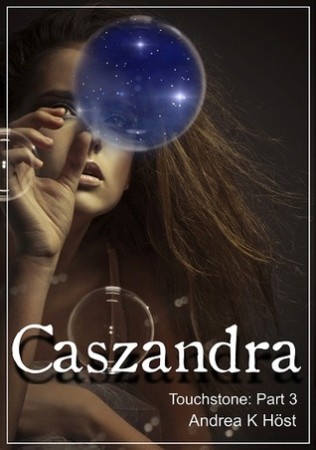 Cassandra Devlin doesn’t know what she’s for. But she knows she’s running out of time.

Since Cass was rescued from the abandoned world of Muina, the Aussie teen has proven more than useful to the people of Tare. Expeditions to their home world no longer end in slaughter. The teaching city of Kalasa has been unlocked. After years of searching for answers, they are starting to make progress.

But space is tearing itself apart. Ionoth attack in ever-greater numbers. And “the useful stray” has been injured so many times that the Tarens hesitate to use her for fear of losing her.

With one particular Taren now her most important person, Cass is determined to contribute everything she can – and hopes to find some answers of her own. What is the link between Muina and Earth? Why are the reclusive Nurans so interested in ‘rescuing’ her? And what role in the crisis do the inhuman Cruzatch play?

Can Cass keep herself together long enough to find out?

Stand alone or series: Book 3 in the Touchstone Trilogy

Why did we read this book: Ana has been Andrea K Höst‘s fan for a while now; then Ana dared Thea to read one of her books for 2013’s Smugglivus Feat of Strength and the rest, as they say, it’s history; and then the both of us decided we really MUST finish this trilogy as soon as possible, and we devoured Lab Rat One.

In my review of Lab Rat One I said that Cassandra’s voice in her journal writing was “stoic, almost detached”. In her part of that same review, Thea disagreed with that statement by saying she felt Cassandra’s voice was passionate. It is funny how sometimes it takes a while for certain things to hit home. I took that onboard but it wasn’t until I started reading Caszandra that I realised that Thea was absolutely right. And how in the world did I not see it before? Because Cassandra is passionate about her new life, her new friends, the man she loves and the new family she builds for herself. She is also adamant and determined to carve her own way, become more than lab rat and discover the true strength of her Touchstone abilities in a way that is more about herself and her inner world than any external pressure and great expectations (although they do exist as well).

In this third book that ends the trilogy everything comes to a close and I couldn’t be happier with the way the story progressed and eventually coalesced into a well-rounded story. The main drive of the series had been Cassandra’s developing abilities as a Touchstone in a context of ongoing danger and undeclared war that ravages the lives of the Tarens. I loved its resolution: the way all the Scifi aspects – including discovering the truths about the past and Munian, the answer to the Cruzatch mystery, and possible questions being raised about these planets’ connection to Earth – mixed with beautiful character development. It says a lot about the author’s abilities to write believable characters in a particular context, that the resolution to Cassandra’s private life did not send me running for the hills because it fit: the story, the characters and their circumstances. I understood the characters’ motivations and their choices.

One thing I have been remiss in not noting before: in my experience, so very often when we read stories featuring first encounter between humans and alien races, we see a determination to show a contrast between humans and aliens. Often this contrast is to the detriment of aliens who, even when viewed in a positive light, that light is still somehow lesser. One of the biggest examples is how often alien civilisations are shown as extremely developed in terms of Science but somehow lacking in creativity and art which is something ONLY the human in the stories will be able to teach them. How much do I love to see how in these books, the Tarens are light-years ahead in scientific development but still have the equivalent to stories in books, TV, movies. This is really interesting in how it creates a sense of familiarity and false comfort – and it was not until I read Caszandra that it suddenly became so clear to me how utterly alien the Tarens really are.

I loved Caszandra as I loved the previous books in the series and now that my reading is competed, I can say that the Touchstone Trilogy is a resounding success and a well-rounded Science Fiction series. I felt completely bereft after finishing it which is why I love that the author published this indulgent, fun and emotional novella which is very aptly called Gratuitous Epilogue (which you can get free here). I am not ashamed to say that it reduced me to tears.

Well, that was a journey.

Like the books before it in the trilogy, Caszandra is a breathtaking, fascinating, enthralling adventure, and one that I loved very much. As one would expect, the main conflicts of the trilogy come to a head in Caszandra and the questions explored since Stray and Lab Rat One – the truth of doomed Muina, the origin of the Cruzatch, the repairing of the rips in space and time – are handily resolved in this final novel. I know I’ve said this before, but it bears repeating: Andrea K. Höst is a brilliant writer whose worldbuilding and plotting skills makes my head hurt (in a good way). Every little hint, every step of Caszandra’s journey since her accidental sojourn from Earth to Muina plays a part in this science fiction saga; every dream and fear and fuzzy talent converges in a dramatic, fitting finale.

As much as I love the science fiction aspects of this novel, when I was reading Caszandra, like Ana, I had my own quiet revelation. This is truly a science fiction novel and trilogy, but the thrust of the series – Caszandra in in particular – is less on the action, and much more on the daily life of a character in an impossible situation. I know, I know. This is a no-brainer that I must have subconsciously been aware of since Stray, but it took until Caszandra for this fact to really sink in. In this third novel, Cass isn’t running around on missions to Near Space willy-nilly, nor is she spending huge amounts of time trying to make sense of her new world. Cass is finally at ease with the Setari squads and Teran traditions; moreover, she’s emotionally fulfilled and blissfully happy because she and Kaoren Ruuel are deeply in love. Caszandra is a story that shows this adjustment and change in Cass’s character – less pained self-consciousness and isolation, much more focus on the immediate things that matter to our heroine. Like Ana says, Cass’s is a passionate narrative, and her love for the people (and worlds!) she cares so deeply for shines in this third novel.

Which brings me to my next point: Cass herself. Perhaps the best way to describe the Cass in Caszandra (as opposed to the Cass in Stray) is… grown up. Cass feels and sounds so much more like an adult in this book – understandably so as so much rests on her abilities and her compassion! – and it’s really interesting to note how different she is now as she reflects and reads her older journal entries aloud to Kaoren. I really, truly love her character from beginning to end of this awesome arc, and appreciate how she has adapted – rather, how she’s truly come into her own – in one Earth year.

Now, onto the things with which I was slightly less enamored. I will say that I am never a fan of the immediate progression from confession of love, to immediate serious relationship, to marriage and surprise!pregnancy or other surrogate kids – all of which seems to happen very quickly (it’s not exclusive to YA SF, either: see everything from Philip Pullman’s Sally Lockheart series to, say, The Office US). I’m willing to give the accelerated relationship trope a pass in Caszandra, though, because Cass is so levelheaded and honest about the situation with Ruuel. She has serious doubts about getting engaged (but takes solace in the fact that it takes the equivalent of 5 Earth years to actually get approved for marriage) and even more doubts about adopting 3 children (again, they are orphaned and unofficial, temporary wards of Kaoren and Cass – actually adopting children is a Big Deal for Tarens). So, while this storyline isn’t my favorite, I do think the careful discussion/evaluation in Caszandra is nicely done. Plus… the romantic in me loves that Cass and Kaoren have established such a solid relationship that is drama-free – they are both serious about each other and their jobs, and I love how much they love each other.

The only other thing I wasn’t crazy about in Caszandra was disproportionate time spent on journal entries that don’t have too much to do with the actual core conflict of the book. But, again, this is utterly believable because everything is relayed through Cass’s diary, and one’s diary DOES tend to include a whole bunch of the mundane (it is a daily log, after all). When things finally do get going, and we learn about the fate of some faces from earlier in the series as well as Muina’s fraught last days, it’s an awesome thing. I don’t want to spoil anything, but I will say this: I am very, very pleased with the way the series ends.

I loved the Touchstone books dearly, and I cannot wait to read the Gratuitous Epilogue (probably tonight). Absolutely, wholeheartedly recommended for SFF lovers, for romantics, for fans of a damn good story from beginning to end.

Ana: 9 – Damn Near Perfect and a 8 – Excellent to the series overall

Thea: 8 – Excellent; for both Caszandra and for the trilogy as a whole.

Reading Next: To be decided