Title: Small Change for Stuart (or Horten’s Miraculous Mechanisms: Magic, Mystery, & a Very Strange Adventure in the US) 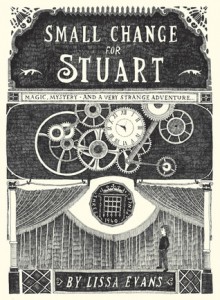 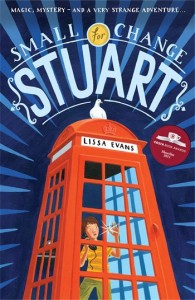 Stuart Horten—ten years old and small for his age—moves to the dreary town of Beeton, far away from all his friends. And then he meets his new next-door neighbours, the unbearable Kingley triplets, and things get even worse.

But in Beeton begins the strangest adventure of Stuart’s life as he is swept up in quest to find his great-uncle’s lost workshop—a workshop stuffed with trickery and magic. There are clues to follow and puzzles to solve, but what starts as fun ends up as danger, and Stuart begins to realize that he can’t finish the task by himself. . . .

Stand alone or series: First in the Stuart books but can be read as stand alone

Why did I read this book: I was on Twitter the other day asking for recommendations of awesome books and someone mentioned this and I saw the cover and all like: I NEED THIS BOOK IN MY LIFE.

This is the Great! Unexpected! Dangerous! story of the great magician Tony Horten, the mysterious circumstances of his disappearance and the quest that a young boy undergoes to find the magician’s missing workshop and its miraculous mechanisms.

The unlikely hero of this story is a (small for his age) 10-year-old boy named him Stuart Horten by his very smart yet not entirely sensible parents. With a name that could be shortened to S. Horten, Stuart, who is indeed a child very small for his age, is granted the nickname shorten by his friends.

In any case, in spite of that, Stuart’s life is pretty good (what with a bike with eight gears and a garden with a tree house and a pond) until his not entirely sensible parents decide to move away to a small town where his father’s family used to live. This is done at the worst possible time ever, meaning: at the of the summer holidays when (as any sensible person would know) it is basically impossible for anyone to make new friends.

Luckily for Stuart, the move leads to the beginning of an awesome Adventure (with capital A) as he finds himself solving the (literal) puzzle of his (as it turns out) Great-Uncle Tony’s disappearance with the aid of the his new neighbours, the triplets April, May and June.

Small Change for Stuart is a super fun read: vastly entertaining and smart. From the clues Stuart must solve to the mechanisms that his uncle has built, it is all very cleverly done. That, combined with other threats woven into the story, like Stuart’s relationship with his older parents, his trips to the library to research the past, a tragic (or it is) love story, just make this little book all the more engaging to older readers as well as kids.

But what really tipped the book into awesome territory for me are two things. First, the friendship that develops between Stuart and the triplets (most of all with April). I loved how at first, Stuart finds them completely alien and scary. The trio run their own newspaper and each kid has a journalistic role to perform and that in itself is a hoot but also show to Stuart how clever they are and eventually he sees them as allies in his adventures. In fact, April becomes the Brains of the operation and Stuart (begrudgingly at first) admires her for that.

Second, this book acknowledges the fact that 10-year-olds live in a universe of their own. There is a very serious moment in the novel in which Stuart has to think about his heart’s desire and it is no surprise that Stuart’s entire universe boils down to the fact that he is short. There is a really interesting balance between the gravitas and importance of this admittedly self-absorbed moment to Stuart at the same time that it shows his decision to do the Right Thing to everybody. I love these moments of True Growth in children’s books especially when the story is still simply fun.

From the adorable opening to the surprising ending Small Change for Stuart is a great MG book. Glad I found it.

Stuart Horten was small for his age—the smallest boy in his grade at school—and both his parents were very tall, which meant that when he stood next to them he looked about the size of an ant.

As well as being tall and quite old (especially his father), his parents were extremely clever people. But clever people aren’t always sensible. A sensible person would never give their child a name that could be written down as S. Horten. A sensible person would realize that anyone called S. Horten would instantly be nicknamed “Shorten,” even by his friends. And Stuart had quite a lot of friends.

He also had a bike with eight gears, a yard with a tree house and a large and muddy pond. Life was pretty good.

Anyway, this whole story—this unexpected, strange, dangerous story of Great-Uncle Tony’s lost legacy—began when Stuart’s mother was offered a new job. She was a doctor (not the sort who stitches
up bleeding wounds but the sort who peers down a microscope) and the new job was in a hospital a hundred miles from home, which was too far for her to travel to every day.

“I could live there during the week,” she said, “but I’d hate it. I’d miss you both too much.”

So that was that, thought Stuart.

Life went on as normal for a day or two, and then Stuart’s father, who was a writer (not of films or of bestselling books, but of difficult crosswords), came up with an awful suggestion.

Additional Thoughts: Have I found a new author to glom? I THINK I HAVE. Small Change for Stuart already has a sequel which I plan to read soon. 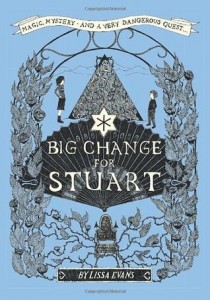 Stuart Horten (ten, but looks younger) is now the owner of a magician’s workshop – except that without his Great-Uncle’s Last Will and Testament, he can’t actually prove it.Which is a problem, since someone else wants it as well; someone who has a lot of money.

The workshop contains seven magnificent stage illusions, but when Stuart starts to investigate them, he discovers that each is the gateway to a magical adventure, with a puzzle to solve, and a clue to extract.

As the clues mount up, the adventures become riskier. Friendship is strained, and danger looms and Stuart has to decide what sort of prize he really, truly wants.

But also! Check this out: doesn’t it sound great? 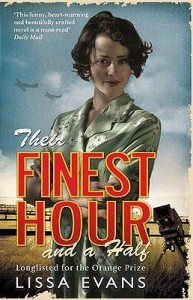 It’s 1940. In a small advertising agency in Soho, London, Catrin Cole writes snappy lines for Vida Elastic and So-Bee-Fee gravy browning. But the nation is in peril, all skills are transferable and there’s a place in the war effort for those who have a knack with words.

Catrin is conscripted into the world of propaganda films. After a short spell promoting the joy of swedes for the Ministry of Food, she finds herself writing dialogue for ‘Just an Ordinary Wednesday’, a heart-warming but largely fabricated ‘true story’ about rescue and romance on the beaches of Dunkirk. And as bombs start to fall on London, she discovers that there’s just as much drama, comedy and passion behind the scenes as there is in front of the camera …