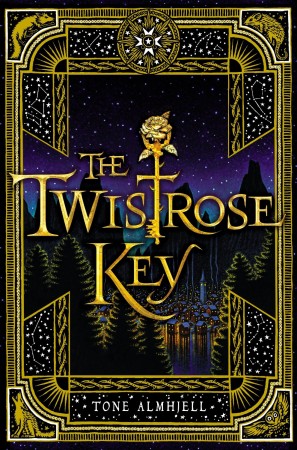 When a mysterious parcel arrives at her family’s new home, eleven-year-old Lin Rosenquist has a curious feeling she’s meant to discover what’s inside.

Much to Lin’s surprise, the ornate key contained in the parcel unlocks a spellbinding world called Sylver, hidden behind the cellar door. Sylver is an enchanting land of eternal winter, inhabited by animals that shared a special connection with children in the real world, either as beloved pets or tamed wild animals. In death, they are delivered to Sylver, where they take on a curiously human-like form and still watch over the children they cherish. While Lin is overjoyed to be reunited with her beloved pet, Rufus, she soon learns that the magic of the Petlings and Wilders is failing, and snow trolls want to claim Sylver for themselves. Lin must discover a way to stop them and save this enchanted world.

Full of charm, suspense, and heartfelt emotion, this memorable classic in the making will leave readers breathless.

Why did I read this book: I’ve had my eye on The Twistrose Key since last year, especially when it started popping up on several best of 2013 lists for middle grade fantasy.

After moving to a new town, young Lin Rosenquist isn’t exactly thrilled. Leaving all of her friends, her home and her school behind has been rough – and it doesn’t look like her family will be moving back any time soon since her mother’s fancy teaching job has been extended. Worst and most painful of all, Lin’s beloved pet rodent Rufus – Lin’s best, truest friend – just died, leaving Lin well and truly alone in this strange new town.

Everything changes when Lin receives a mysterious package on her doorstep, bearing a single word: Twistrose. The package contains a key that opens the door to a strange, magical land… And for curious, lonely Lin, nothing will ever be the same again.

The debut novel from Norwegian author Tone Almhjell, The Twistrose Key is a sweet, if utterly familiar, story. Let’s get the obvious right out there in the open, shall we? The Twistrose Key is very, immediately, overwhelmingly reminiscent of C.S. Lewis’s much beloved land of Narinia. In The Twistrose Key, Lin opens the door to Sylver: a land of Eternal Winter, populated by strange talking, sentient, magical animals. In this strange magical land, Lin is a prophesied savior – she is a Twistrose, a child who will help Sylver maintain its magic in time of great peril and dire need. Luckily, Lin has the help of a magical animal, her best and dearest friend Rufus, to renew the magic that sustains Sylver. Oh, and there are tempting treats like waffles along the way.

I don’t think I’m being outlandish when I assert that The Twistrose Key isn’t exactly groundbreaking in terms of plot or worldbuilding.

That (very obvious) criticism aside, The Twistrose Key is actually quite a charming, sweet novel. Part of that charm is rooted in the nostalgia of discovering a land like Sylver – for me, personally, it reminded me of being a 10 year old and discovering Narnia alongside the Pevensie children. But more than that, The Twistrose Key is such a sweet novel because of its intriguing underlying premise: the idea that beloved animals, wild (Wilders) and domesticated (Petlings), who have formed a unique bond of reciprocal love with their humans get to live on in a magical land after death. Another thing I should say aloud: I love animals. I’ve loved my pets like they are dearly beloved friends and family members, and as a child I would have been enchanted by the idea that there is a place that pets go after they die in this world. (This is actually a kinda cute play on the idea of “sending the dog out to the farm in the countryside” if you know what I mean.) (Also, even though I know my cat Rambo loves me, how amazing would it be if she could talk and tell me so?)

Furthermore, under this premise it is assumed that ONLY the animals lucky enough to have had humans that loved them, and humans whose pets loved them back with the same amount, would be revived as wildlings and petlings. There’s something fascinating about the nature of that love – it isn’t a moral judgement of “only GOOD pets go to Sylver” – which is clearly untrue. I mean, that creepy, manipulative cat Figenskar is not a good guy, yet he’s there in Sylver (and on that note I can totally imagine one of my old cats, Teddy Bear, turning out EXACTLY the same way).

This underlying premise is what makes The Twistrose Key‘s main pair of characters, Lin and Rufus, so endearing. At the beginning of the novel, Lin is frustrated, sad, and lonely – she spends most of her time out in the cold next to Rufus’ grave by the rosebush. When she opens a door to Sylver and finds her best friend watching over her, waiting for her, their reunion is so overwhelmingly joyous and heartwarming. Rufus is steadfast and clever to Lin’s sense of courage and adventure; together the two hold the fate of Sylver in their hands, and they are the best possible team of friends to take down the evil Margrave and restore the magic of winter. There are a slew of other characters introduced in this book too, although these are somewhat less well developed creatures – of all the secondary characters, wiley fox Teodore, and that terrifying sadistic cat Figenskar, are the most notable.

The only other thing to say about The Twistrose Key is that I wish I had discovered this book as a ten or eleven year old. This novel is perfect for young readers looking for a talking-animal fantasy featuring a string of adventures with a little dash of dark magic – for my older self, though charmed and nostalgic, the book feels a little derivative without that extra special oomph that would make it new or memorable. And, while the underlying premise is beguiling and the writing style utterly competent, the plot is scattered and episodic without fully achieving the grand adventure that The Twistrose Key could have been.

Still, I enjoyed the frosty trip to Sylveros and its environs, and I’ll certainly read more of Tone Almhjell’s writing in the future.

The grave that Lin had made for her friend could not be touched by wind. Above, the dripping rosebush flailed, scratching its thorns at the wall. But the whittled cross of twigs and string did not so much as shiver. Instead a lick of rime had crept up to cover the
wood with white. Later, Lin Rosenquist would remember this as a sign, the first.

Perhaps she might have caught it then, if she hadn’t been too busy watching the storm. It came from the north and roared up the river, wrenching through the cobbled streets of Oldtown, pulling dusk down between the wooden houses in the early afternoon. Lin stood by Mrs. Ichalar’s flower bed, with her hand in her pocket, grinning to herself. At last, a storm that showed some promise! She crouched down to whisper to the cross, “See you later, little one.”

You can read the first chapter online HERE. Also, look at this beautiful map of Sylver: 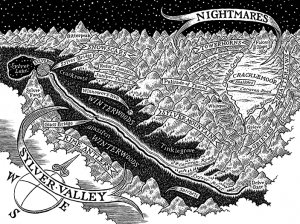 I’m a sucker for maps, and this one – plus the rest of the introductory chapter illustrations – from Ian Schoenherr is gorgeous.