Who: Foz Meadows, YA urban fantasy writer, author of the novels Solace and Grief, The Key to Starveldt as well as a contribution to last year’s Sincere Forms of Flattery. She is also an amazing blogger, writing about feminism, pop culture, books, politics and more at her own place Shattersnipe: Malcontent & Rainbows, with the occasional contribution to The Huffington Post and Strange Horizons. 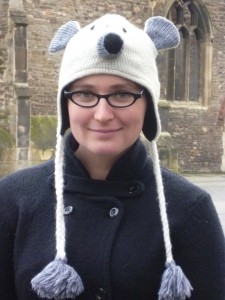 Please give it up for Foz!

All the Pretty Women

From girlhood onwards, women are taught the absolute importance of female beauty – not just through the omnipresent cultural narratives of airbrushed models, princess fashion and whiteness as default, but through the stories we tell ourselves. Among the many clear differences between boy-oriented action figures and girl-oriented dolls, for instance, there’s the question of physical representation. Male action figures – or rather, the characters they’re based on – are allowed to be old and ugly. Though some are grotesquely over-muscled, others are not; some are even overweight, or at least bulky, while others are slender. Some have scars or physical disfigurements; others have cybernetic limbs. True, they’re not all good guys, but their villainy is never sex-dependant, and you can buy the toys in pretty much equal numbers. Nobody cares whether little boys are invested in the handsomeness of the characters they’re trained to emulate, and as such, even though our obsession with putting pretty people on screens still means there’s a healthy percentage of rakish heroes for them to worship, it’s not the be-all, end-all of what’s on offer.

Little girls, however, are given princesses: women whose beauty is always explicitly stated to be part of what makes them special. Female villains still tend to be sexualised – indeed, they often show more skin than their heroine counterparts and try actively to seduce good men, because by accepting their own beauty and daring to use it consciously, they commit the sin of vanity; or worse, are turned into bitter evil queens and jealous stepmothers by the curse of ugliness and ageing. Though some good old women occasionally sneak into the narrative, they tend to be cast for comic effect, rather than taking on active mentoring roles to younger women (which is just one of the many ways in which the older Katara of Avatar: The Legend of Korra is a groundbreaking character). Mothers tend overwhelmingly to be absent, or restricted to purely domestic realms; but either way, they don’t generally make it to doll format. Action figures come in all shapes and sizes; dolls, however, are eternally young and beautiful.

There are exceptions to the rules, of course. The My Little Pony: Friendship is Magic reboot, despite its markedly thinner ponies, lingering investment in princess culture and the inexplicable inclusion of a pony fashion industry despite the fact that almost nobody wears clothes, is one of the few shows aimed at girls whose female characters exhibit a range of personalities, have adventures, and aren’t human. Or at least, they weren’t – thanks in large part (one suspects) to the influence of the brony fandom, the recent MLP film, Equestria Girls, shows the ponies turning into a clique of real – and extremely skinny – girls. This is how deeply obsessed with female beauty and sexuality our culture is: thanks to the unapologetic fetishisation of a number of adult, male fans, there’s a very real sense in which the target audience of a show aimed at pre-teen girls can’t safely google images from a show about cartoon horses without encountering highly sexualised, even pornographic, fanarts.

Because what’s the point of female characters who aren’t firmly and explicitly stated to be pretty? Not that they’re allowed to know they’re pretty – as a recent compilation of actual quotes from classic novels by the wonderful Mallory Ortberg pointed out, narratively speaking, we’re obsessed with the idea that openly admitting the beauty of particular women is a bad thing; because female vanity is (naturally) horrific, the absolute worst, such that even winking at female prettiness could potentially tar the subject with the awful brush of slutty, vainglorious primping. Instead, we have to come at it sideways, telling ourselves that women aren’t pretty until men come along and say they are; that women must both actively maintain their beauty while appearing to take no effort over their appearance, because that would make them high-maintenance and self-obsessed; that women are at their most beautiful when they don’t know they’re beautiful.

And so, in turn, we impose these anxieties on our female characters, writing endless romance heroines – and, increasingly, YA heroines – who think they’re plain or ugly despite the legions of suitors telling them otherwise, because god forbid young women love themselves first. Our female villains, by contrast, are sexual, sensual, overtly fashion-obsessed (unlike the virtuous plain janes and tomboys who just so happen to look stunning when, conveniently, they’re repeatedly forced against their will to wear evening gowns) and, because they’re aware of their beauty, either out to use it for their own gain or else determined to rub it in the faces of uglier women. Over and over and over again, we teach girls that beauty matters most of everything in the world, but that they’re never allowed to be proud of it, or to think of themselves as beautiful until or unless they’re told by other people, usually men, that they are – and even then, they should just smile shyly and get on with killing themselves to fit into the same clothes at age twenty-eight that they wore at eighteen, because ageing is toxic to beauty. And if they happen to fall outside the narrow, established model of “beauty” – if they’re something other than thin, white, blonde and busty? Then they don’t get made into maquettes, dolls OR action figures, because who wants to buy a statuette of an ugly woman? I mean, a gelatinous tentacle-brain living in the hollowed-out chest cavity of a musclebound android gimp is one thing, but a plump brown woman? No dice, bucko.

And from the bottom of my heart, in my clearest, loudest, angriest voice, I say unto everyone: THIS FUCKING SUCKS, AND IT NEEDS TO STOP.

And lest you think this cloyingly small idea of attractiveness is limited to physical beauty, consider the many ways in which the Manic Pixie Dream Girl trope has come to dominate – if not actively replace – depictions of female eccentricity, by simple virtue of the fact that it embodies only those types of quirky, strange behaviour that aren’t impediments to conventional beauty. MPDGs are cute and perky; they’re well-dressed, vivacious muses who teach sad men how to live again. Which doesn’t mean they’re an inherently unrealistic archetype; it just means that, overwhelmingly, they’re seen through a lens of male infatuation, rather than as people in their own right. Because the full range of female eccentricity includes traits which, while viewed as acceptable – or even desirable – in men, are anathema to this carefully constructed idea of default female prettiness. Eccentric women aren’t all fashion-savvy rockabilly queens in Zooey Deschanel dresses and Alice bands (though more power to the ones who are) – sometimes, they dress badly, or madly, or wear the same t-shirt three weeks in a row because they’re too caught up with an engineering problem to bother with laundry. Sometimes, they don’t give a shit about eyeliner – and sometimes, even if you’re still trying to call them pixies, they’re physically closer to Ursula the sea-witch than Tinkerbell the fairy – and that’s OK.

Eccentric women don’t only exhibit the sort of unselfconscious, carefree, madcap mannerisms that can be used to revitalise the imagination of unshaven musicians; they can also be as socially awkward as Abed Nadir, as abrasive as Sherlock Holmes when played by Benedict Cumberbatch, as inappropriate as Greg House, and as difficult to work with as any TV maverick you’d care to name. Neither does female eccentricity necessarily stem from heartbreak, as per Miss Haversham, or from being old and imperious, as per Lady Bracknell and Catherine de Burgh. Eccentric women don’t need patronising friends and well-meaning partners to help bring them closer to normalcy, like Amy Farrah Fowler and, increasingly, Temperance Brennan, because eccentricity isn’t the new helplessness. Eccentric women aren’t all domestic goddesses who express their quirkiness through shopping addictions and baking, or impeccably-dressed beauties who just so happen to live in a pigsty. Narratively, as culturally, we’re afraid of acknowledging the full range of female eccentricity, because it makes us uncomfortable to contemplate women behaving in ways which, while neither overtly villainous nor morally reprehensible, hinder their ability to present as either conventional beauties or viable sexual prospects. Female eccentricity, where it exists in modern pop culture, does so as a quality to be eliminated through makeovers and social guidance: the initial veneer of unpopularity, awkwardness and nerdhood magicked out of existence by the judicious application of hairspray, high heels and fancy dresses.

Here is my wish for 2014: to read and watch stories peopled with a wider range of eccentric, complicated, interesting women than I’ve seen thus far. Give me a broader definition of female beauty – one that acknowledges different body types, a full spectrum of skin tones, non-saccharine personalities and which isn’t wholly cisgendered or able-bodied. Give me women who love themselves regardless of whether anyone else does; give me women whose partners – be they male or female or genderqueer – are attracted to self-esteem, rather than seeking to supply it to a series of shrinking violets. Give me women who own their sexuality without being cast as villains, and women whose sexuality has nothing to do with the narrative whatsoever. Give me eccentric women whose quirkiness isn’t just a cutsey gimmick boiled down to the lowest white male hipster-attracting denominator; give me women who are difficult and prickly and non-neurotypical and awkward and passionate, women whose flaws aren’t presented as obstacles to be overcome or circumvented, but as valid, important parts of their personalities. Give me women who can withstand criticism while learning from it – or failing to learn, or refusing to learn – and women who can dish it out, too.

And a Happy New Year to all – may all of our wishes for something true become reality.