Who: Tansy Rayner Roberts, who writes fantasy novels under her own name, and crime novels under the name Livia Day. Her most recent releases are Ink Black Magic (Tansy) and A Trifle Dead (Livia). Tansy is a co-host of two all female podcasts, Galactic Suburbia and Verity. In 2013, Tansy won the Hugo for Best Fan Writer. She blogs about books, superheroes and Doctor Who at http://tansyrr.com/ 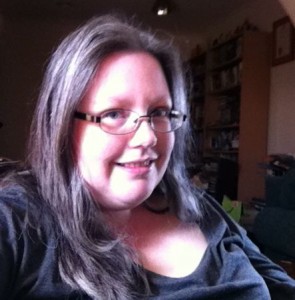 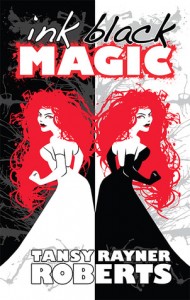 Please give a warm welcome to Tansy, everyone!

I’m a sucker for Christmas stories, specials and movies. There’s so much baggage around that particular holiday – so many different, conflicting and overlapping traditions, a weight of history and mythology taking in so many other stories over the centuries, plus of course the overwhelming social expectation to Have A Good Time With/Without Family. Even those who don’t celebrate Christmas at all often get tangled up in its tinselly trap because it’s so hard to avoid at this time of year. Work parties, secret Santas, music piped into stores… sometimes it feels rather like Christmas is a complex AI out to get the human race.

Then there’s the romance and sentiment tied up with ideas like ‘being with your loved ones,’ ‘giving the perfect gift’ and of course cooking a complex meal with high risk factors. With pressure like that, it’s no wonder that this is a time of year when any other narrative tension lurking in your life is likely to come to a boil, and in some cases, explode messily all over the walls.

Possibly my perspective on this is extra twisted because of the Australian angle – our Christmas is in summer which means it’s subverted before we even get to it! And yes, while Australians often give cards with surfing Santas and sunbathing kangaroos on them, we also exchange cards with snowmen and frosty pine trees. Many of us try to do the fresh Christmas tree thing, despite them wilting into sad sunburnt shapes even before we get them home. We tell everyone about prawns on the barbie and lovely fresh fruit salads but the truth is, more of us end up roasting a turkey on a sweltering summer day than we care to admit.

In short, we don’t all make sensible life choices at Christmas. Which is why of course it makes for such interesting narrative, particularly when you start unpacking all the baggage around it.

But what about in books? I go quite overboard with giving my family books at this time of year, to the point where I have to wrap them collectively into parcels because if I individually wrapped each one, we’d be watching the kids unwrap books for days. For this post I thought I’d recommend books which are Christmas-themed and also awesome.

GIVE THE GIFT OF MURDER

I’m a big murder mystery reader, and I do love a crime set at Christmas, for all the already-cited reasons of tinsel and social pressure. There are some classics to choose from: Tied up With Tinsel by Ngaio Marsh (is that not the best title ever?) is one of my favourites by this author who was the New Zealander equivalent of Agatha Christie – not quite as famous, but every bit as good with her plots and characters. Tied Up With Tinsel is one of her rare novels from a female POV: Troy, the bohemian artist wife of stuffy police detective Roderick Alleyn. 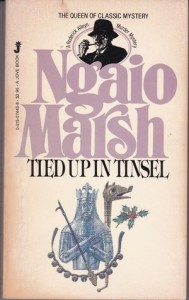 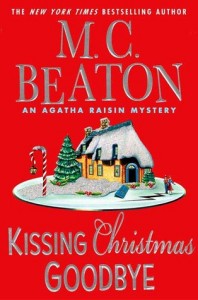 Agatha Christie herself has also written a few Christmas books, of which my favourite is The Adventure of the Christmas Pudding, (again, what a title!) a collection of short stories. Only the title story is Christmas-themed (don’t want to over-egg the plum pudding!), but it’s also a good title to give someone as an introduction to Christie because it’s a rare example of her collections which features both Miss Marple and Poirot, her most famous detectives.

For a slightly more modern take on the Christmas-and-mystery combination, I do like a spot of Agatha Raisin. This cranky 50 something business woman in the Cotswolds (featuring in a series of novels by Hamish Macbeth creator M.C. Beaton) makes for an unusual amateur/private detective, and Beaton is very good at the comic character portraits necessary for a good ‘cozy’. I recently came across the “Christmas special” of these series, Kissing Christmas Goodbye and was sucked in by Agatha’s determined if agonised attempts to throw ‘the perfect Christmas’ for her community, while solving what appears to be a parody of the British Country House Murder tradition.

GIVE THE GIFT OF CONNIE WILLIS

A Connie Willis book is always a good present! I love my copy of Miracle and Other Christmas Stories, a collection of her science fictional (and sometimes fantastical) holiday stories which regularly appeared in the December issue of Asimov’s. I don’t believe it remains in print, but can probably be hunted down second hand and is certainly available on the Kindle. 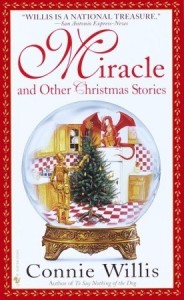 The title story, ‘Miracle’ is one of my absolute favourite Christmas stories, a guardian angel tale told with far less sappiness than any such story should have a right to – and most importantly, a romantic comedy containing much banter about which is the best Christmas movie. The collection as a whole is very good, though, and while it leans more towards the sentimental side of what Christmas means as a modern holiday, it also does some deconstructing with stories like ‘Letter From the Clearys’ which combines the ‘Christmas newsletter’ tradition with the bleakness of nuclear winter. Hooray!

GIVE THE GIFT OF A CLASSIC

Yep, I’m going to say it. A Christmas Carol by Charles Dickens. A ridiculously cliched suggestion, but I have to include it because I loathe everything Charles Dickens has ever written, except for this one remarkably elegant and restrained piece of prose. Every sentence is perfect, and if you’ve seen a zillion versions of this story on TV but never got around to reading the original, it’s nice to have the excuse. Plus it’s a super slender book, which is a bit less threatening than handing over a massive ‘famous classic novel’ tome in the expectation that they’ll find enough hours to devote to it. The benefit of giving a classic is that they are available in many gorgeous editions, some of them at very modest prices. 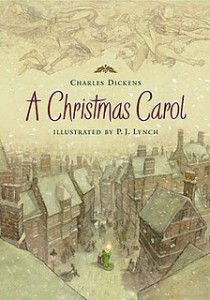 For extra fannish goodness, I would be remiss in not mentioning the audiobook version read by Tom Baker, the Fourth Doctor himself. You can get it as a download for the perfect last minute gift for any Doctor Who fan.

GIVE THE GIFT OF ALIEN INVASION

Speaking of Doctor Who, I want to give a shout out for a lovely comic that appeared in Doctor Who Magazine last Christmas, Imaginary Enemies. Coming out only a couple of months after we waved goodbye to the Ponds, this story showed a snapshot of Amy’s childhood with Rory and Mels, with an alien invasion/Christmas nativity play plot that feels straight out of the Sarah Jane Adventures. The story also concluded with a beautiful page summing up Amy and Rory’s life together after the Doctor in a series of snapshots. 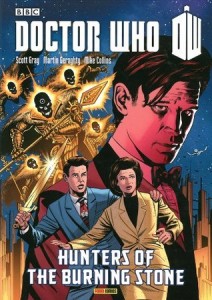 It would be a nice thing to share with the Doctor Who/Amy Pond fan in your life and is collected now in the graphic novel Hunters of the Burning Stone, along with a main feature commemorating this year’s 50th anniversary with elements from the very first Doctor Who story including Barbara, Ian and the Tribe of Gum.

GIVE THE GIFT OF PORK

I always feel disingenuous recommending Hogfather, by Terry Pratchett, because it’s never been anywhere close to my favourite Discworld novel – but I can’t deny that is a wonderfully cynical deconstruction of the tropes and mythology around Christmas, a holiday with so many decades of tradition that it can be unpacked all year around. It also features Susan, one of my favourite Discworld heroines, and Death, one of the best realised ongoing characters in the series. Also, a lot of sausages. I’m quite fond of the TV movie version, too, with Lady Mary from Downton Abbey as silver-haired Susan.

Pratchett’s novels are synonymous with Christmas for me, because the new hardback each year has been my reliable ‘get me this’ present recommendation. Honestly, I don’t require much, thanks to my terrible habit of buying books for myself constantly, but a new Pratchett and a box of chocolates pretty much does me for Christmas. It’s going to be terribly sad when there isn’t a new one every year. 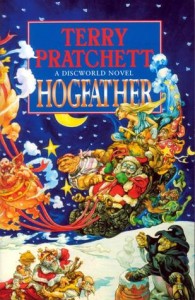 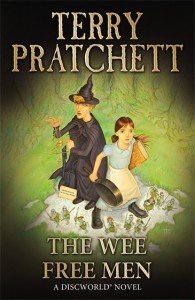 Hogfather is a most excellent Christmas book, though I’m not sure it would be the best introduction to the series for someone to receive under the tree. For that I would recommend something like The Truth or Going Postal, solid “standalone” novels that convey the cleverness of the Discworld without you needing a massive ‘this is what you missed’ manual. The Tiffany Aching books starting with The Wee Free Men are good for the younger teen readers in your midst, and the gift of Nanny Ogg would have to be appropriate for any holiday celebration – so Wyrd Sisters or Witches Abroad would both be fun gifts.

The Discworld book I personally associate most with Christmas, though, is The Last Hero, a wonderful illustrated story which features Pratchett’s usual humorous prose style with the gorgeous art of Paul Kidby. It doesn’t have any Christmassy bits in it at all, but it would certainly be a way to ease a new reader into what the Discworld thing is actually about.

GIVE THE GIFT OF WOMBATS

Speaking of picture books, kids are the best people to shop for at Christmas! Especially little ones for whom a picture book is a magical thing (though if you’re lucky enough to have an older child in your life who knows chapter books are just as magical, congratulations! Never take it for granted).

I think the Christmas book I’ve given to kids most often in my life is The Australian Twelve Days of Christmas – though confusingly, there are at least three different versions out there. I think the one I remember from my childhood is written & illustrated by Conny Fechner.

There are also Christmas versions of nearly every popular children’s books series out there, which is a no-brainer if you know that your kids are into Maisy, Fancy Nancy, Spot, or so on. And chances are they already have a copy of The Grinch Who Stole Christmas – but wouldn’t it be terrible if they didn’t? 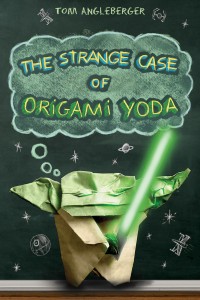 If you need a recommendation about what’s hot right now, my nearly-nine-year-old informs me that the best thing since sliced bread in her age group is any book with ‘Origami Yoda’ in the title. The series is not especially Christmassy, but trust me on this one. Great books for boys and girls alike and if they’re anything like my daughter you’ll find them still folding origami versions of Han Solo and Chewbacca days later… yes, the novels come with activity instructions!

But the perfect book to give kids at Christmas is something I haven’t found yet – when I was young I had a book of traditions around the world, including activities, recipes and costumes. Every year I hunt out one of these for my children and I’ve never found the right one yet.

So if anyone has one to recommend, I’d love to hear from you!