Today, Ana continues her ongoing love story with Sir Terry Pratchett by reading The Amazing Maurice and His Educated Rodents.

Title: The Amazing Maurice and His Educated Rodents 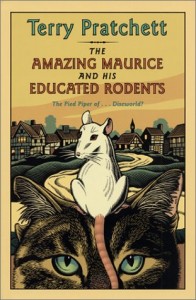 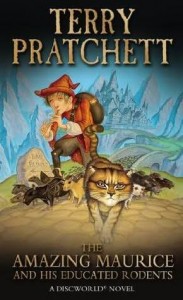 One rat, popping up here and there, squeaking loudly, and taking a bath in the cream, could be a plague all by himself. After a few days of this, it was amazing how glad people were to see the kid with his magical rat pipe. And they were amazing when the rats followed hint out of town.

They’d have been really amazed if they’d ever found out that the rats and the piper met up with a cat somewhere outside of town and solemnly counted out the money.

The Amazing Maurice runs the perfect Pied Piper scam. This streetwise alley cat knows the value of cold, hard cash and can talk his way into and out of anything. But when Maurice and his cohorts decide to con the town of Bad Blintz, it will take more than fast talking to survive the danger that awaits. For this is a town where food is scarce and rats are hated, where cellars are lined with deadly traps, and where a terrifying evil lurks beneath the hunger-stricken streets….

Standalone or series: It’s Discworld book #28 but it can be read as a standalone.

Why did I read this book: I am on a mission to read ALL THE TERRY PRATCHETTs and my source for all things Pratchett told me to read this one next.

So, ever since hearing about the Amazing Maurice (in Reaper Man) for the first time, I had been thinking that Maurice was the boy in the cover of my copy of the book. Ha ha.

But Maurice is the cat. And he is Amazing (he says so himself). He is amazing because he can speak and he can think, just like the group of educated rats who are his associates in a fabulous scheme to make money. Travelling together from town to town in the company of a teenage piper, the idea is that the rats pose as a “plague” and the piper boy lures them away and in so doing “saves” the town and earns the crew money to keep them going.

But the rats are growing increasingly restless about their arrangement and start questioning Maurice and the ethics of their life choices.

Then they arrive in Bad Blintz, a poverty-stricken town with a pre-existing rat plague and even official rat-catchers. And as they go about setting up their scheme, they come to realise that there is something really wrong about Bad Blintz. The Amazing Maurice and His Educated Rodents is a stand-alone Discworld novel, a take on “The Pied Piper of Hamelin”, Terry Pratchett-style, which means it’s funny, thought-provoking, intelligent.

It never ceases to amaze me the amount of… stuff one can find in a Terry Pratchett book. “Stuff” seems like a good choice of word here, because I am so very often at a loss for words when reading his books and because I sometimes feel I will never be knowledgeable (or smart) enough to even attempt to fully deconstruct his work. It’s always a daunting task to sit down to write something intelligible about a book like The Amazing Maurice and His Educated Rodents (or a book like Nation, or a book like Reaper Man. You get the idea).

And it’s funny how the book actually summarises some of its main themes in the first few opening lines:

“It was just a story about people and rats. And the difficult part of it was deciding who the people were, and who were the rats.
But Malicia Grim said it was a story about stories.”

And on one hand, yes: that’s the book right there. But then again: no, because that is woefully reductive? Because there is a plain good story between these covers and it’s the story of a group of rats who after ingesting toxic waste gained intelligence and little by little have started to question everything: what it means to be able to think, what is the meaning of life and of death, what is the nature of “rat”. It is a realisation that critical – and abstract – thinking comes with all sorts of strings attached and that with great thoughts come great responsibility.

It’s the story of a town as well as a story about power and poverty and greed so ugly you almost can’t believe it. It is also a story about survival, about fighting for what is right, about unimaginable cruelty[1. I first heard about Rat Kings reading this book. Insert expletives] but also surprising sacrifice. It is about the power of the “self”, about the power of the individual and the power of the group. It’s about moral conundrums and ethics. About rats who have named themselves Dangerous Beans, Darktan and Sardines when they first learn to read from labels and food tins but before they realised what the words meant. It is about a girl who named herself Grim and created her own history because stories matter and deconstruction and understanding of tropes can be a matter of life and death.

I was reading this very book when earlier this week The Telegraph published an article about novelist Joanna Trollope’s belief that: “Children need classics not fantasy” and that “children are getting little moral guidance from fantasy novels like Twilight”. I’d love to kindly point her – or anyone who scoffs Fantasy, YA or Children’s literature – toward this book, please and thank you preciouuuus.

‘If you don’t turn your life into a story, you just become a part of someone else’s story.’
‘And what if your story doesn’t work?’
‘You keep changing it until you find one that does.’

Reading Next: Reality Boy by A S King