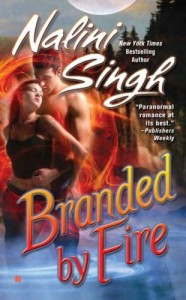 Stand Alone or Series: Psy-Changeling book 6 – can not (should not) be read as a stand alone.

Summary:Though DarkRiver sentinel Mercy is feeling the pressure to mate, she savagely resists when Riley Kincaid, a lieutenant from the SnowDancer pack, tries to possess her. The problem is not simply that he pushes her buttons; the problem is that he’s a wolf, she’s a cat, and they’re both used to being on top.

But when a brilliant changeling researcher is kidnapped from DarkRiver territory, Mercy and Riley must work together to track the young man—before his shadowy captors decide he’s no longer useful. Along the way, the two dominants may find that submitting to one another uncovers not just a deadly conspiracy, but a passion so raw that it’ll leave them both branded by fire

Why did I read the book: Hello, my name is Ana and I am a nalinisingh-a-holic

Change can kill. But it can also save.
Take the Psy for example: the Silence Protocol was implemented in an attempt to thwart the madness typical to their race, wiping their emotions to save their existence. This change saved them and set them apart and above all the other races – or so they thought. Now , the changeling and the humans are beginning to rise and for better or for worse, the Psy need to face their destiny and once more accept change – or die.
__________________

In this sixth entry in the series, the romance plot follows Mercy and Riley, characters that have appeared before in the series. Mercy is a sentinel for the leopard pack, DarkRiver whereas Riley is second in command for the wolf pack – SnowDance. Since the two packs have allied in the upcoming war against the Psy, Mercy and Riley have worked as the liaison for their respective packs. They are very strong people : both physically and in personality and have huge responsibilities in their packs. And when they get together – whoa – sparks fly as you would expect from two dominants. Mercy and Riley have been dancing around each other, getting on each other’s nerves for a while now (which in romance means “Meant for Each Other”). Contrary to the previous books in the series, Mercy and Riley start their (very.hot) sexual dance very early in the book (chapter one to be exact) which is very apropos to their personalities and conforming to the characteristic of the world Nalini Singh has created. Because this is the first full-blown changeling couple in the series and it is only appropriate that their sensual nature is centre stage. At least at first.

Because one of the main features in the Psy-Changeling series is how the animal in each of the changelings is juxtaposed to the human part.
All changelings are BOTH animal and human. The animal will be all instinct (to protect, to couple, to mate) and usually the instinct will be cause for actions and feelings that the human will follow. But not without thinking. This is what is so great about this series: even though there is the underlying Fated to Mate aspect that the animal half acknowledges , the human half still needs to think things through and accept it as well for it to work. The tension between Riley and Mercy comes from their human half having to accept the change (the “theme” of this book) that their relationship can bring to their live: if they are mated, will their kids be able to change since they are wolf and leopard? What will happen to their allegiance to their packs – will they still be connected to their Alphas or will one of them have to sever the contact? For Mercy there is also the question of how dominant she is and if she would even be able to accept someone in her life. The answer is of course, yes but the fun part is to follow the development of the story and the scorching hot interactions between Riley and Mercy.

But as much as the sexual tension is important for this couple, the strength of the novel is in the emotional bonding that slowly builds between them. As much as the two are strong characters (Riley is called the “Wall” by his alpha Hawke for his cold head for negotiating, for example) , one half of the couple has an emotional frailty coming from losses or near losses, and I thought it was great that it was the male character – Riley. There is a huge insight on his character that comes from his brother Andrew when he says to Mercy that Riley would sacrifice himself for the ones he loves but he doesn’t believe that anyone would do the same for him. He suffers from nightmares since his sister Brenna was tortured by a Psy in a previous book (book 1 ) and he is unable to let it go. And Mercy, the dominant female needs to learn a bit about nurturing to be able to be with Riley and that is absolutely great to see.

The juxtaposition of human-animal is not the only one in the series because the romance is equally juxtaposed to the world-building of the Psy-Changeling tension. And the tension builds even more in this book as The Human Alliance become a pain for both Psy and Changeling. There is danger , and the nerve-wrecking build-up to something huge. It is so clear to me that there is an end-game and that this is truly a well-planned, well-thought out series if ever there was one. Nalini Singh introduces a new kind of Psy in this one, as well as new characters and a lot of old ones have important roles. This is another great aspect about the series: characters from previous books make appearances but not just as a “hey-I am here, look at me, am I not cute” appearance but because their story is not done and they need to still accomplish something or develop their story arcs. I am thinking about Sascha, the female character from the first book, Slave to Sensation who is still dealing with her defection from the PsyNet and still needs to have closure with her mother.

Speaking of secondary characters, and because I am such a tease: there is a lot of Hawke , the wolf alpha on this one. And I mean, A LOT. And a lot of Sienna. Nalini Singh is building their relationship very nicely indeed and when their time comes to shine (but I think it will take some time though) , it will be absolutely great.

Branded by Fire is a superb addition to a winning series coming second only to Caressed by Ice (book 3) which is still my favourite in the series. And can I just say this: Nalini Singh astonishes me. Simple as that: this is the second book she wrote this year (the first was Angels’ Blood) and both will most probably make my top 10 of 2009. AND she has a third one coming out later in the year – Blaze of Memory, another entry in the Psy-Changeling series and I have no doubt it will be another winner.

So, yeah. My name is Ana and it is no wonder that I am a nalinisingh-a-holic.

Notable Quotes/ Parts: Just about every single interaction between Riley and Mercy. Also, between Mercy and her pack members. Actually, make that all the scenes between Riley and his alpha, Hawke and between Hawke and Sienna. Crap. the whole book is freaking notable.

Additional Thoughts: Tomorrow, Nalini Singh will be blogging with us about her Inspiration and Infuences and we will have a copy of Branded by Fire to giveaway.