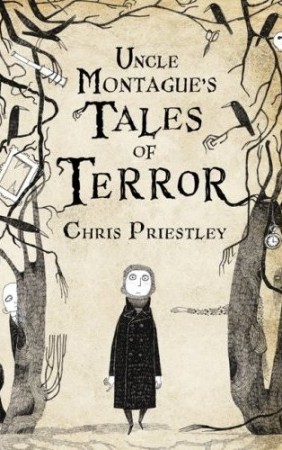 This spine-tingling, thrill-packed novel has more than enough fear-factor for the most ardent fan of scary stories. Uncle Montague lives alone in a big house, but regular visits from his nephew, Edward, give him the opportunity to recount some of the most frightening stories he knows. As each tale unfolds, it becomes clear that something sinister is in the air. From the account of a curious boy who intrudes on Old Mother Tallow’s garden to a shy girl’s ghostly encounter during an innocent game of hide and seek, a pattern emerges of young lives gone awry in the most terrifying of ways. Young Edward begins to wonder just how Uncle Montague knows all these ghastly tales, and ultimately discovers that his mysterious uncle’s life has a darker side than he ever imagined. This cleverly wrought collection of stories-within-a-story by Chris Priestly is perfectly matched in darkly witty illustrations by David Roberts.(less)

Young Edward is a good boy.

He follows the rules imposed by authority, he obeys his disinterested mother and father, and in general has an easygoing disposition. When he returns home for the holidays from school, one of Edward’s favorite things to do is to traverse the dark woods outside his family home and visit with his elderly Uncle Montague. The woods are dark and deep, and the trip is always fraught with peril – but Edward is a sensible young chap, and braves the elements in order to spend time with his peculiar Uncle in his peculiar, crumbling mansion.

You see, Uncle Montague is a bit of a collector, and a bit of a storyteller. Whenever Edward visits, his head is filled with his Uncle’s eerie, unsettling tales – each tale accompanying a particular artifact in Uncle’s shadowy sitting room. As disturbing as his Uncle’s stories are, Edward tells himself that he isn’t scared.

After all, they’re only stories.

I am a sucker for horror stories written for young readers, especially horror stories written for children. Those are the scariest kind. Think on your fairy tales, from Grimm to Perrault; think on nursery rhymes and children’s songs. Most of all, think on those books you might have enjoyed as a young reader – for me, those are Alvin Schwartz’s Scary Stories to Tell in the Dark, or the many works of Roald Dahl. These tales are far spookier than adults give them credit for, and remain among some of my favorite works of horror and speculative fiction, period. Imagine my glee, then, when Ana came visiting bearing the Tales of Terror collection from Chris Priestly as gifts! In this first of a three volume series (each book stands alone, but I decided to read them in order starting with Uncle Montague), there are 11 stories of terror. Actually, it’s more like 9 stories of terror, bookended by one larger tale that ties the collection together – in a very Tales from the Crypt, EC Comics-esque technique.

As a complete collection, Uncle Montague’s Tales of Terror are wonderfully twisted and deviously dark gothic tales, indeed. Each story involves an object of interest and the story of the unfortunate child whose fate was tangled with that object – an impossibly intricate porcelain doll, a gilded frame, an engraved wooden demon, a telescope, and more.

So, on to the actual stories (all of which are of the gothic, Victorian/Edwardian persuasion): In “Climb Not” an ancient elm tree outside a family home is never meant to be climbed, but a curious boy decides to break the rules, at great cost. “The Un-Door” tells the story of a pair of con artists pretending to be a mother-daughter clairvoyant team, and a peculiar dollhouse they discover at their most recent job. In “The Demon Bench End” a wood-engraved demon chooses its victims every several years, cursing its bearer with its cruel mad chatter; “Offerings” follows a family that moves into a new home, and the son who makes a peculiar new friend in the garden. “Winter Pruning” is more of a fairy tale than any of the other stories, with an old woman rumored to be a witch, and the young boy who dares to enter her home. “The Gilt Frame” (one of my favorite stories of the bunch) follows a young, spoiled girl who learns the power of wishes; and “Djinn” takes a look at a very different type of genie (and the boy who makes the tragic mistake of underestimating her). In “Ghost Story” a group of girls listen to the story of a murder that happened in that very house, and in “The Path” a boy runs away from home only to find his fate scrambling to catch up to him.

All of these stories are effective and frightening, though as with any collection of stories some are stronger than others (my favorites include “The Un-Door” (a very Twilight Zone kind of book), “The Gilt Frame” and “The Demon Bench End”). Something I appreciate very much in this particular collection is that the stories aren’t all moral lesson parables – while many do fall under that paradigm (listen to the rules, do not steal or lie, think before you act), there are other stories that pass no moral judgement. For example, in “The Gilt Frame” a selfish girl learns her lesson, but all too late to matter; in “Ghost Story” the girl who is picked on by others gets the most terrible fright of all; in “The Demon Bench End,” the afflicted boy is cursed at random, not through real fault of his own. Sometimes horrific things happen because they happen; that is one of the scariest lessons of them all.

Finally, I cannot finish this review without mentioning the structure of the narrative. The true fun of Uncle Montague is the way in which all the stories are tied together by an overarching narrative – the story of young Edward and his Uncle’s strange house. Uncle Montague has a story all of his own, which is a delightfully chilling payoff after reading the other assorted tales of terror.

In sum: if you’re looking for a quick group of shivery tales to share with young readers – or just to read yourself on a cold autumn night – look no further. I thoroughly enjoyed Uncle Montague’s Tales of Terror, and will absolutely be back to devour more.

Notable Quotes/Parts: I highly recommend you check out the UK Website for the book to get a taste for the illustrations, sample an excerpt, and enjoy.

Reading Next: The Small Hand and Dolly by Susan Hill

Over at Kirkus: Scale-Bright by Benjanun Sriduangkaew