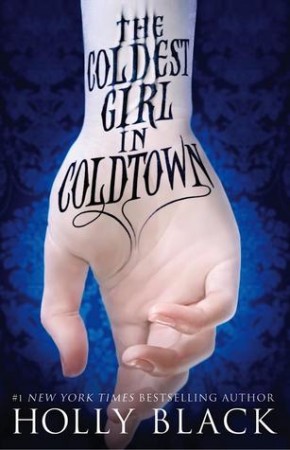 Title: The Coldest Girl in Coldtown

Tana lives in a world where walled cities called Coldtowns exist. In them, quarantined monsters and humans mingle in a decadently bloody mix of predator and prey. The only problem is, once you pass through Coldtown’s gates, you can never leave.

One morning, after a perfectly ordinary party, Tana wakes up surrounded by corpses. The only other survivors of this massacre are her exasperatingly endearing ex-boyfriend, infected and on the edge, and a mysterious boy burdened with a terrible secret. Shaken and determined, Tana enters a race against the clock to save the three of them the only way she knows how: by going straight to the wicked, opulent heart of Coldtown itself.

The Coldest Girl in Coldtown is a wholly original story of rage and revenge, of guilt and horror, and of love and loathing from bestselling and acclaimed author Holly Black.

Stand alone or series: Stand alone (but could be the start of a beautiful series?)

Why did I read this book: I am a fan of Holly Black’s books but this book in particular has been on my radar since I first heard about it – this book was inspired by a story of the same name that features in the Eternal Kiss anthology. I remember reading the short story and thinking how amazing it was. I thought it was one of the best stories in the anthology.

Since this is going to be a long review (so much to talk about) I wanted to start by cutting to the chase and saying how much I loved The Coldest Girl in Coldtown. It’s an amazing YA vampire story (words not often said by yours truly) written with the to-be-expected Holly Black-vitality, that features an incredible female protagonist, a richly imagined world and an unexpectedly heart-stopping romance (no love triangles, thank gods, despite what the blurb slightly implies). With added grisly horror as a bonus.

Partying hard and waking up the day after dazed and confused is no big deal for Tana. Until the day she wakes up after a party surrounded by the corpses of all of her high school friends, all murdered by vampires. But she is not the only survivor as she soon finds out: her ex-boyfriend Aidan and a mysterious boy named Gavriel also made it through the night. Tana soon realises that Aidan has been infected and that Gavriel is already a vampire and that both are inexplicably chained in the same room, possibly being kept as late morning snacks for the vampires.

Because in this world, vampirism is like a disease. Once you get bitten it takes 48 hours to know if you are infected and if yes, then you can beat it by avoiding drinking human blood for 88 days. It’s a really hard thing to do because by that point most people have gone crazy with bloodlust. Tana vows to do it, at any cost, if she is truly gone Cold. The problem is: once you enter a Coldtown, it is almost impossible to leave it.

This setting is the primary drive of The Coldest Girl in the Coldtown but Tana’s personal arc is set within an intricately imagined vampire story. In this world, vampires always existed in hiding until a merciful act became the catalyst for a widespread epidemic that caused entire towns to fall. Some of them have been locked to the world – Coldtowns – where quarantined humans and vampires live together almost in a perfect harmony of decadent pleasure and pain. Broadcast news from these places travel this almost post-apocalyptic world and some humans are inevitably attracted by the allure of an immortal life, especially when those awesome, glamorous celebrity-vampire parties are streamed. Tana is not of them having known first-hand the true horror of vampirism when her mother was infected when Tana was ten.

This is a book that enthralled be from its fantastically gory, striking opening through layers and layers of a fantastic journey that ends in a perfect and I can’t stress this enough, perfect bang. Its plot is parts road trip, part survival adventure, part romance, all of it mingled with political and social observations of the dynamics within the Coldtown as well as pure unmitigated horror and darkness. The politics come from the understanding the nature of the Coldtown and of its inhabitants, the ways that society has built itself around the arrival of the vampires into the mainstream populace and the autocratic nature of the decision-making process of who gets to stay in Coldtowns and why. Holly Black’s take on vampirism – especially its mixture of attraction and repulsion – might not exactly be anything new, most of it is a throwback to classic vampirism a la Anne Rice. But her proposed solutions, the varied ways of reacting to this new world besides the introduction of 21st century technology (blogs, streaming) to the mix kind of updates the type of story I grew up reading to a new audience that might only know Emo Sparkly Vampires (cheap shot, I know, I am so sorry).

In addition, we have Tana, a female character who is the heroine of this story in many different ways. She is the narrator and she is also the one who does all the saving – sometimes out of courage and bravery, sometimes out of desperation and fear. She won’t let go because she wants to make right by those she is loyal to. There is heartbreak in her story (her backstory about her mother, her present relationship with her father) as well as happiness. The latter clearly comes from the female friendships she has both in and out of Coldtown.

A surprising aspect of this novel is how the romance worked for me. There is no love triangle so the main romantic entanglement is the one between Tana and Gavriel. Without spoiling too much of his backstory, Gavriel is much older, has been an immortal vampire for centuries and is never ever NOT portrayed as anything but the monster that he is. Tana says at one point that each day since he died was not one where he aged but rather one he grew away from humanity. That this story allows for Tana to be attracted to him as he is, without naivety, to fully know that she is falling for a monster shapes this as a horror story almost more than anything else that happens. It is clear though that Tana herself is not completely without her own darkness and this is exemplified by their first major kiss. Not their tentative first kiss but their second one as initiated by Tana. It is a kiss of Danger, of Horror and one that allows Gavriel to utter the ultra cheesy but completely awesome words: “you are more dangerous than daybreak”. That and the scene where Tana kills a vampire then licks all of his blood cement this as a horrific, dark, bloody awesome book to me.

Often with romances between a teenager and a centuries old immortal, I always wonder what makes them fall for one another and here I understood their almost immediate connection. I understood their connection because of shared trauma, their death wishes and their understanding of what mercy means. I loved that: I loved how both had merciful moments (that ended up in bloodshed) that shaped who they were.

That said, the fact that Gavriel is the only one to utter the “L” word does help me get onboard their romance. He has been intense and creepy from day one so it is only realistic that he would fall in love so easily. What I love though is that Tana doesn’t- there is admitted allure, there is attraction that is both physical but also attraction to danger, to death, to horror but not love, not just yet.

There is so much more though that happens in this story with a myriad of secondary characters but I can’t possible write about everything. This is already tl;dr.

Finally, there is the question of how the narrative alternates between the now with Tana’s narrative, whose urgency comes from the counting down each hour to see if she is infected, the need to keep alive and going; and the then with chapters that contains several viewpoints and backstories including but not restricted to: the history of how the world became what it is now, another character’s blog entries, Tana’s sister Pearl’s thoughts and even Gavriel’s story. These chapters did interrupt the flow of Tana’s narrative at times but how much this will be a deterrent will depend on each reader. To me, those worked really well to add extra layers and to allow for the information to be added without being exactly dumped especially because I loved the almost whimsical narrative voice that most of these were written with.

In my review notes, the ones I wrote as soon as I finished the book, I remarked, in bold and underlined: reading this book reminded me of what it felt like reading vintage Anne Rice (her early vampire books like The Vampire Lestat) when I was fifteen. Reading Coldtown took me quite a few years back to that feeling of being utterly and equally horrified and enthralled by a vampire story. Later, I realised that it also reminded me of other great works like Sunshine by Robin Mckinley and even Buffy the Vampire Slayer (Gavriel’s past story of his vampire family is very reminiscent of the early days of the Angel-Spike-Drusilla dynamics).

To sum up: this novel is exquisite. Easily a favourite book of 2013 and on the run for a top 10 spot.

When Tana was six, vampires were Muppets, endlessly counting, or cartoon villains in black cloaks with red polyester linings. Kids would dress up like vampires on Halloween, wearing plastic teeth that fitted badly over their own and smearing their faces with sweet syrup to make mock rivulets of cherry bright blood.

That all changed with Caspar Morales. There had been plenty of books and films romanticizing vampires over the last century. It was only a matter of time before a vampire started romanticizing himself. Crazy, romantic Caspar decided that unlike decades of ancient, hidebound vampires, he wouldn’t kill his victims. He would seduce
them, drink a little blood, and then move on, from city to city. By the time the old vampires caught up with him and ripped him to pieces, he’d already infected hundreds of people. And those new vampires, with no idea how to prevent the spread, infected thousands.

Additional thoughts: Go here to read our Q&A with Holly Black and for a chance to win one of 4 copies of the book. RUN.

Reading Next: More Than This by Patrick Ness

Book Review – No Rest for the Wicked