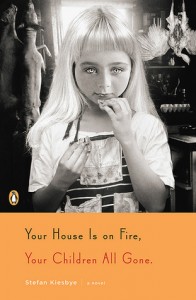 Title: Your House Is on Fire, Your Children All Gone

The village of Hemmersmoor is a place untouched by time and shrouded in superstition: There is the grand manor house whose occupants despise the villagers, the small pub whose regulars talk of revenants, the old mill no one dares to mention. This is where four young friends come of age—in an atmosphere thick with fear and suspicion. Their innocent games soon bring them face-toface with the village’s darkest secrets in this eerily dispassionate, astonishingly assured novel, evocative of Stephen King’s classic short story “Children of the Corn” and infused with the spirit of the Brothers Grimm.

Why did I read this book: Not going to lie, the first thing that caught my eye was the deliciously creepy cover and title.

Five friends reunite in the small village of Hemmersmoor, a rural town in the German countryside, many years after the bloom of youth has passed. Now old men and women, Martin, Christian, Linde, and Alex gather at Anke’s grave, paying their last respects to the dead – a ceremony punctuated by Linde’s hiking up her skirt and pissing on Anke’s casket. Through a series of interconnected chapters, each narrated by one of the characters, Stefan Kiesbye unveils the past of these children and the strange, anachronistic German village, where superstition and fear rule as law. Through the eyes of Martin (the reluctant), Christian (the detached sociopath), Linde (the bitter), and Anke (the selfish) we learn about the group and the things they have seen and done over the years.

I’m at a loss to aptly describe the effect of Your House Is on Fire, Your Children All Gone. It’s an eerily detached novel, with characters that range from emotionless to desperate, governed by tradition, superstition and even the supernatural. It’s an unsettling book. A quiet book. A surreal book. I’m not sure how I feel about it – one character murders his sister, one does the same to his father. One betrays a friend time and again; one’s hopes and dreams are crushed and replaced with bitter pain. There is manipulation and betrayal, rape and murder. Your House Is on Fire is like a domestic drama, but set in a twisted, frightening German vision of town that refuses to modernize or change.

I suppose this is the novel’s true strength – it’s success in creating an unsettled atmosphere and setting. The town of Hemmersmoor is a strange and nightmarish place, which in turn shapes the actions and perceptions of its inhabitants over the years. There isn’t an actual dominant or linear storyline; Your House Is on Fire, Your Children All Gone is a pastiche of different characters’ thoughts and memories, which is eerily effective, but perhaps not to every reader’s particular taste.

There isn’t really too much else to say about this very odd, effectively disturbing little book. It’s memorable, certainly, and recommended if you’re looking for a trip down a surreal, disjointed path.

In September we celebrated Thanksgiving in Hemmersmoor, and mass was followed by festivities at Frick’s. In the afternoon, after beer stuck to every surface, the villagers spilled into the square to take part in the yearly cooking contest.

“For the first one death, for the second starvation, for the third one bread”—that old proverb described the colonization of the Devil’s Moor, but our bread remained as hard and gray and sour as our soil.

To enter the cooking contest was costly, because the rules stated that each dish had to feed at least four dozen people. Hemmersmoor had three categories: best stew, best roast, and
best Butterkuchen, the buttery, sugar- sprinkled sheet cake our baker, Meier, was famous for and that he sold for funerals and weddings alike. Meier always won the contest, uncontested that
is, because who would dare go up against him?

Additional Thoughts: A bit on the cover – it’s a fantastic package, and kudos to Penguin’s art department for nailing such an evocative and frightening image. The print cover also comes with an added bonus – spot laminated on the image are the words “If you tell on me you’re dead,” visible only at a certain angle. 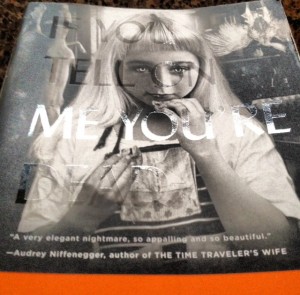 WHY HAVEN’T I READ THESE BOOKS?!: The Uglies Trilogy by Scott Westerfeld