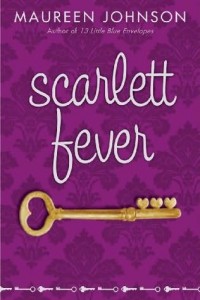 Stand alone or series: Follow-up to Suite Scarlett and there’s gonna be at least one more book after this one.

Scarlett is back . . .
. . . in this sequel to Suite Scarlett. School’s in session. Mrs. Amberson has moved just down the street and opened the Amy Amberson Agency (AAA, frequently called by stranded motorists). She’s taken Scarlett on as her official assistant. Marlene has had a personality transplant, Spencer accidentally becomes public enemy #1, and there is definitely something wrong with Lola. And Eric? Oh, he’s still around too.

That would really be enough.
Unfortunately, two new figures have entered Scarlett’s life: 15 year-old Broadway star Chelsea Biggs and her brother Max. What could possibly be more life-affirming and ego-boosting than to work with someone your own age who has a thriving stage career? Especially when said person has a brother who has nothing better to do than make you miserable every single day? Absolutely nothing. It’s a dream life.

The summer was nothing.
This is when it gets real. The drama has spread over all of New York City. Gossip pages, boys standing in trashcans, an ill-fated cake, murder on the steps of the courthouse, flying doughnuts, violence in the Biology lab, Broadway politics, topiary abuse, a dog named Murray who tinkles when he sees hats . . . and then comes one event will change the Martin family forever. *thunderclap*

Why did I read this book: : I read Suite Scarlett last year and loved it!

How did I get this book: I politely asked a copy to the publisher.

Review: Warning: contains a few spoilers (but they are mostly light speculation about romantic entanglements)

Scarlett Fever is the sequel to Suite Scarlett and it is as charming and endearing as it is predecessor.

Stop. Wait a minute. Sometimes I catch myself writing these lines and they sound just like the lines you would find in these stuck-up reviews with those pre-approved words that you always find like: “genuine”, “charming” or “poignant” and “compelling” (I mean, these words are fine words and I love them and gosh how much do I use them). But as much as the line above is true and wholesome and professional is also very much terse and it doesn’t convey exactly what I really want to say.

So I will just go ahead and say it with the words that I want to use: Scarlett Fever is made of win.

Picking up right after Suite Scarlett left off, it is the end of the Summer holidays, the short season of Hamlet at the Hopewell Hotel is coming to a close and Scarlett is getting ready to go back to school whilst still being very much hung up on Eric-The-Bastard, the older guy who sort of broke her heart. Money problems still afflict the family and Spencer (the cute, amazing) older brother is still looking for his time to shine. But not all is lost, thanks to Scarlett’s boss (the hilarious) Mrs. Amberson, who has opened a new agency ( AAA, frequently called by stranded motorists) , Spencer lands a role in Crime and Punishment ( a cool shout out to the TV show Law and Order).

But if things are looking up for Spencer (who is awesome and drool-worthy) they are not so much for other members of the family: Lola is not her usual self nor is Marlene (and Scarlett is SURE that kid is up to something) and then there is this new guy at school called Max (MAX! MAX!) whose sister is Mrs Amberson new client and whom Scarlett is tasked to spy on for his mother. The guy proves to be bitter and sullen and yet….sigh (MAX!) and then Eric-The-Jerk decides to come back and hang out with Scarlett but maybe that’s because he needs an agent.

It might sound gimmicky and funny, it might sound crazy and quirky and the book is all of those things but above all it is an excellent character-driven piece which revolves around the Martins. Suite Scarlett is a little less hilariously funny than the previous book but it works so much better because it favours more serious character development – all of the Martin siblings have at least a moment in the spotlight (obviously Spencer, as a fan favourite, more than others) and their relationship with one another is one of my favourite aspects about the series. But what glues them all together is Scarlett – in spite of all appearances (Spencer is the “Talented” brother, “Lola” is the Beautiful one, Marlene is the “baby” , so where does that leave Scarlett?) even though she is unassuming, even though she believes herself to be lost. At one moment she doesn’t know what she will do with her life but the reader knows – it is her sense of directive, her objectiveness towards other people’s problems that is one of her greatest strengths even if she is not entirely aware of it. That is actually extremely realistic given how she is only 16 and a great arc for her character. I just love it.

And she really sounds like she is 16. I loved how she kept checking Eric-I-Am-SO-Not-A-Fan’s commercial on youtube because she just couldn’t control herself; her feelings about her family’s economical situation in comparison to that of her wealthy friends. Speaking of which – I really enjoyed her relationship with her friend Dakota and her continuous one with Mrs Amberson. It still cracks me every time she calls Scarlett, simply: O’Hara. What can I say, I am a simple person.

So simple that it is really easy to win my heart and that brings me to Max: the new teenage boy that drives Scarlett insane in more ways than you can imagine although not at first. I never liked Eric-The-Douchebag so it is pretty easy for me to root for Max in this new triangle even if he does do something that may be considered morally …. Not Right. To wit I say: all is fair in love and war! Oh please Scarlett, choose MAX! pick MAX! Love MAX!

From the descriptions of life in New York and at the Hopewell to the close family relationship between the Martins, this book I repeat, is made of win and I loved every second of it.

A word of caution. Just so you be prepared: the book ends rather abruptly with a terrible, horrible cliff-hanger of DOOM (ok, so I exaggerate a little bit). To use an apt comparison: imagine if you were watching Hamlet and instead of seeing the second act you were just sent home right when things, important romantic things were starting to develop between Hamlet and Ophelia (I did use the word “imagine”) and some other unimportant dude whom we will just call “Ericlet” without any idea of when the third act would be played? Well, yes. That’s what happens at the end of Scarlett Fever . The good news is that this proves that there will definitely be a third act, er book. And I simply can’t wait.

It always took a moment for the Hopewell water pipes to figure out what temperate you wanted. The default setting was “death by ice or fire.” Scarlett didn’t care at the moment. She would take what came, and what came was cold. Bitter, impossible cold that almost felt good in the heat. She locked her teeth together and accepted it, letting it run down her back. As she reached for her shampoo, she got dangerously close to singing “I’m Gonna Wash That Man Right Outta My Hair,” a song she learned when Spencer was doing South Pacific in high school. She stopped herself just as she opened her mouth. New start or not, there was a line to be drawn, and that line was singing musicals to yourself as serious psychological motivation

And an interaction between Scarlett and Max: it starts with mockery…

“So,” he called down the stairwell, “you’re dating my sister now, huh? Or was that just you being a good lackey?”
“My boss gave me fifty bucks,” Scarlett answered honestly. “Next time time? I’m going to ask her for double.”
For the first time, Scarlett heard Max laugh. If she had been guessing, she would have thought his laugh would sound like a man-cackle, or something like the squawk of a dying bird. But it was a full, round sound. Not unlike an actor laugh – from the belly, full of voice. The largeness and humanesss seemed to startled them both, and he turned and went back up.

Additional Thoughts: I really need to read more by Maureen Johnson. Any suggestions? I hear Devilish is good? I am collecting suggestions for our next Young Adult Appreciation Month so suggest away please!

Also, if you are going to the BBC in New York in May – don’t know what the BBC is? GASP! Check this out: the first EVER Book Blogger Convention – did you know that Maureen Johnson is going to be the keynote speaker! How cool!

Verdict: Charming, fun and made of win, Scarlett Fever is even better than Suite Scarlett so if you liked the first one, run don’t walk, to get this.

From the Page to the Screen: All You Need is Kill / Edge of Tomorrow

Gaiman Week – Children’s Books Double Feature: The Day I Swapped my Dad for Two Gold Fish and Odd and The Frost Giants