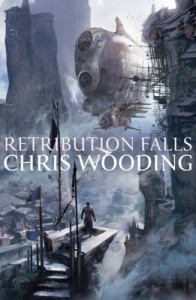 Stand alone or series: First in the Tales of the Ketty Jay series.

Frey is the captain of the Ketty Jay, leader of a small and highly dysfunctional band of layabouts. An inveterate womaniser and rogue, he and his gang make a living on the wrong side of the law, avoiding the heavily armed flying frigates of the Coalition Navy. With their trio of ragged fighter craft, they run contraband, rob airships and generally make a nuisance of themselves. So a hot tip on a cargo freighter loaded with valuables seems like a great prospect for an easy heist and a fast buck. Until the heist goes wrong, and the freighter explodes. Suddenly Frey isn’t just a nuisance anymore – he’s public enemy number one, with the Coalition Navy on his tail and contractors hired to take him down. But Frey knows something they don’t. That freighter was rigged to blow, and Frey has been framed to take the fall. If he wants to prove it, he’s going to have to catch the real culprit. He must face liars and lovers, dogfights and gunfights, Dukes and daemons. It’s going to take all his criminal talents to prove he’s not the criminal they think he is …

Why did I read this book: After many glowing reviews and being shortlisted for the Arthur Clarke award, I just had to. Plus look at the GORGEOUS cover.

Retribution Falls has been on my radar for a while. Since its release last year, it has accumulated glowing reviews (including one in The Guardian) and was even shortlisted for the prestigious ARTHUR C. CLARKE award. When I received the ARC for its sequel Black Lung Captain which came with a line in the marketing material comparing the series to Joss Whedon’s fabulous Firefly TV Show, I felt it was about time I read it.

The story follows the dysfunctional crew of the battered freighter Ketty Jay, led by their captain Darian Frey as they cruise along from job to job, most of them of a questionable nature. When their latest commission goes terribly wrong and they are framed for the death of several people including a famous Heir, they decide to prove their innocence by any means necessary. Fleeing the law, escaping from pirates, getting immersed in political intrigue and facing former lovers as well as their own past, will the crew of the Ketty Jay come out of it, especially when their greatest challenge is to trust each other?

On the surface, Retribution Falls is an enjoyable, adventurous romp and it can present the reader with a few hours of fun read. I know I liked parts of the book, the adventure of it all especially given as how I am a sucker for the ragtag-crew-who-learns-to-like-each-other trope and I so wish I could take everything in this book as its face value and just accept it all and relax. But I find that I just can’t – damn you, brain! Why must you be so critical?

Ultimately Retribution Falls does not stand to scrutiny. For starters there is the world building which is merely glossed over. I have seen the book described as Steampunk but I simply do not have enough data about the world to be able to determine that, as dates, locations, details are all very fuzzy. I find that perhaps this is a conscious choice by the author in order to keep the furious pacing going. But oddly, that same fast and furious pacing is brought down by very clumsy exposition about the characters and an inordinate amount of telling, not showing.

For example, from the get go we are told how the characters feel about each other. Frey, the captain, loves the ship more than anything in the world and he doesn’t see his crew as a “crew”. I am told he doesn’t care for them over and over again, until I am told his feelings have changed. Crake, the one paying passenger thinks them all to be inferior (especially one of the pilots, whom he describes as an “idiot” many times over) and so on and so forth. This was repeated throughout the book but especially towards the ending in a way that it only served to telegraph what would happen next and what the story is really about. It became so predictable that I just knew what would happen to every single one of them. Forget adventure, piracy, and conspiracy, the true story being told here is that about the characters and the main arc is how they all become a real crew.

In principle that would have been awesome but the majority of the characters come across as stereotypes that are not truly fleshed out: here we have the “idiot” pilot; the “coward” second pilot, the “silent” mechanic, the “drunken” doctor. I mentioned exposition about the characters and this is what happens in this book: the story is building up then it will stop for a character to reminisce about his or her past, usually by internal monologue or by telling it to another character. Almost immediately something will happen that will bring up this very same past or its repercussions in a way that the character has to deal with it. I can’t begin to tell how much of a shame this is, because some of these characters have truly interesting pasts. Frey and Drake especially are flawed characters who made horrible decisions in life and now have to deal with them.

The comparisons with Firefly that were inevitably drawn (similar set up, world, premise, etc), are in my opinion, to the detriment of Retribution Falls. As unfair as this comparison may be the characters are nowhere near as cool as those of Firefly and Frey is certainly no Mal. But above all, one particular aspect stands out in this comparison: if there is one thing that Joss Whedon does really well, is to write awesome female characters. Out of Serenity’s crew, 4 are strong, interesting female characters who stand on their own.

And here lies my main issue with Retribution Falls which perhaps serves as a window into the world of Speculative Fiction and its known problem with female representation and characterisation. The majority of women in this novel are either faceless whores who the characters indulge their free time with or women who have been doomed by their love for the male protagonist.

The two main secondary characters are Frey’s former lovers: one has been sent to a convent after he ditched her and still sort of loves him; the other is the “villain” of the novel, a fearless pirate Trinica Dracken who could have been so cool; but she turns out to be a former lover, someone whom cowardly Frey left at the altar years and years ago and the pain of being left was so much, she tried to kill self, lost their child, left home to join a ship where she is of course, raped several times. She then hardens herself, goes through a transformation as a result of her love for this guy – becomes UGLY – and this otherwise very capable pirate is of course, thwarted by the hero of the piece at every turn. The problem with this is that both these characters exist only in relation to the lame male character.

What about the crew of Ketty Jay? Out of 7, one is female ( I am not counting the other one, Bess, because she is, surprise! A Golem who is used as brute force). And Jez is quite possibly my favourite character of the piece: she is clever, strong, interesting. But I have a problem with how others see her. Right in the beginning of the novel when she is being recruited to join the crew, this is how Frey decides that she is the one:

Her features were petite and appealing but she was rather plain, boyish and very pale. That was also good. An overly attractive woman was fatal on a craft full of men. They were distracting and tended to substitute charm and flirtatiousness for doing any actual work. Besides, Frey would feel obligated to sleep with her, and that never worked out well.

This is very, very problematic. A female character needs to be plain or boyish (see how being “male” is better?) or else she is a sexual distraction?

When one is writing a review like this one, one must consider whether these are written with intentional self-awareness. Are there repercussions for such characterisations? These may be “in character” but do the male characters learn the “errors of their way” or at the very least do the female characters regain respect by being generally made of awesome even if the male characters do not see it?

No, I would say not in this particular example. In fact towards the very end of the novel Jez saves the day and it is implied that she does so by doing sexual favours even though, up until that point, she was the cleverer character in the entire piece, perfecly capable of saving the day without having to use her vagina.

Am I alone in reading the misogyny – by number and by characterisation – present in this novel? No, thankfully, I am not.

I have to say: I am completely astonished by the award nomination – I can’t think how Retribution Falls can be representative of the best in the genre. Fun, yes. But it can’t be top of the line and it certainly can’t, shouldn’t be that, when it represents female characters like that. I am sure most will think of me as a party pooper but these things need to be brought up and discussed more often because after all, characters do not exist in a vacuum, they are CREATED by their writers and are therefore a matter of choice. Frey could have remained a despicable, coward, misogynistic, flawed character without the female characters being depicted the way they were.

In the end, the experience of reading Retribution Falls was like eating a mixed bag of Turkish Delight blindfolded. Sometimes I would get the pistachio flavoured ones (yay) but the majority of them were rose-flavoured (yuck!) .

Notable Quotes/Parts: There is this once scene I thought was pretty cool and super tense – when they are navigating towards Retribution Falls.

Verdict: Retribution Falls has a good premise and is a potentially fun read but it is brought down by clumsy writing and poor characterisations – especially the female ones.

Rating:4 – Bad but not without some merit

Reading Next: A Madness of Angels by Kate Griffin.